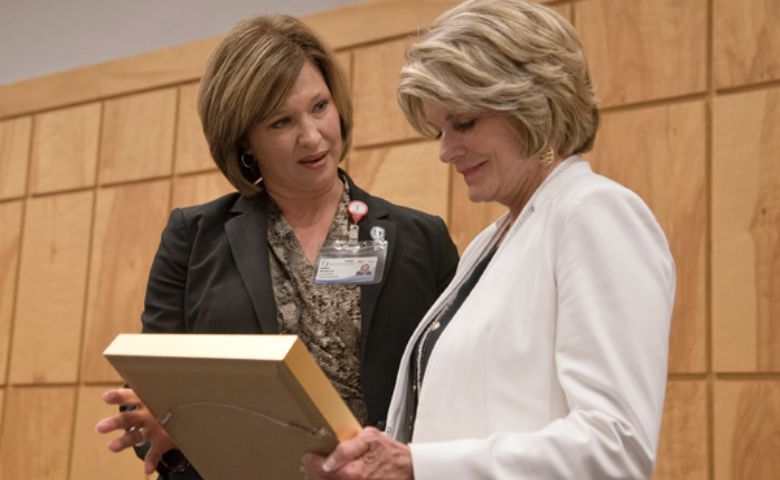 Suzan Thames, right, accepts a medal, framed in a shadow box from Dr. LouAnn Woodward, vice chancellor for health affairs and dean of the School of Medicine, Wednesday during a tribute to Thames at the Student Union. The medal bears the inscription, "The Suzan Brown Thames Chair of Pediatrics."

Suzan B. Thames, whose name is synonymous with raising funds and nurturing Mississippi's children, was celebrated Wednesday at the Medical Center in a clandestine operation.

The homage was kept secret from Thames until she walked into the annual meeting of the Friends of Children's Hospital and some 60 voices yelled, "Surprise!"

Thames, the original president and chair of Friends, which promotes and raises funds for Batson Children's Hospital, proceeded to collect accolades and a memento as the namesake of the endowed chair now held by Dr. Rick Barr.

She received a shadow box-framed medal bearing the inscription, "The Suzan Brown Thames Chair of Pediatrics," which was fully endowed in 2010; the medal is a replica of the one awarded to Barr when he was named chair in 2011.

"When you see this I want you to remember how much we appreciate you," said Dr. LouAnn Woodward, vice chancellor for health affairs and dean of the School of Medicine, as she presented the medal to Thames. "I want you to think about the friends you have raised and the millions of dollars you have raised. But most importantly, think of all the children and the children's families who are better off because of what you have done."

"You are one of our heroes." Sara Ray, who succeeded Thames as chair of the Friends board in 2010, told the gathering, "Following Suzan is like following Vince Lombardi, Johnny Vaught or Bear Bryant.

"You are symbolic of Friends," she said, addressing Thames directly. "Because of you, Friends exists. We are so proud to be part of an organization you started."

Thames, who now serves as Friends' honorary chair, began her volunteer career with the Medical Center in the early 1980s in conjunction with the Junior League of Jackson to raise money for the construction of the Children's Cancer Clinic. She followed that act by chairing, for 20 years, Friends, whose support spurred the opening of the state's only hospital for children in 1997.

"This is a huge passion of mine," Thames said after the ceremony. "This is what I've wanted my life to revolve around – cutting-edge medical care for our children. And I'm so proud of Sara Ray and the heights she'll take it to."

The rise of Friends, which is now 25 years old, began when Dr. Owen "Bev" Evans was chair of the Department of Pediatrics; it was his idea to create a fund-raising group for the hospital – and to recruit Thames as its president.

"I'm the one who has been given a gift – to be able to do this," Thames said. "I've met the grandest people, the most generous people. Hard work, yes, but it's been such a joyful part of my life."

Individuals and organizations interested in supporting the University of Mississippi Medical Center and its initiatives and programs can contact Travis Bradburn, Interim Executive Director of Development and Alumni Affairs and Interim Chief Development Officer, (601) 984-2107 or tbradburn@umc.edu or contribute online via umc.edu/givenow.