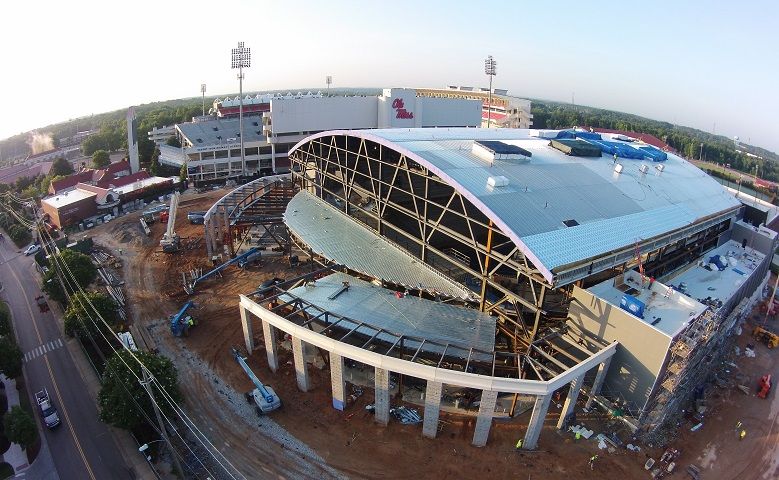 Thanks to generous donors from Rebel Nation, the Pavilion at Ole Miss will open in January 2016.

Due to the continued generosity of Rebel Nation, the Ole Miss Athletics Foundation is excited to announce contributions of $35.2 million from donors in the fiscal year that ended June 30, 2015. The annual contributions break the previous record of $27.4 million in cash donations set the previous fiscal year.

"I want to personally thank each and every member of the Ole Miss family who made a gift in 2014-15. Rebel Nation continues to grow, and the generous donations made throughout the year demonstrate the commitment to Ole Miss and our student-athletes,” Ole Miss Director of Athletics Ross Bjork said. “Our mission is to provide Ole Miss student-athletes with a world class experience while following our core values.  With the generosity from more than 11,000 members of the Ole Miss family, we continue to not only maintain that experience, but grow it as well. We are certainly not finished in this endeavor, as we continue to move forward together.”

Annual giving, which is comprised of Ole Miss Athletics Foundation membership and priority seating donations, accounted for $15.6 million (44.4 percent) of the $35.2 million in cash gifts.

The Vaught Society received $8 million in cash donations for Ole Miss Athletics this fiscal year. Starting with 29 original charter members in 2010, the Vaught Society currently has over 360 members who make pledges of $25,000 or greater over the course of five years.

Adding to the $8 million in cash donations raised by the Vaught Society, $10.7 million was donated through the generosity of Forward Together Capital Gift Agreements.

"This accomplishment is a direct result of the passion and commitment of Rebel Nation. Through their generosity we were able to reach new fundraising heights,” said Executive Director of the Ole Miss Athletics Foundation, Keith Carter. "We have asked our members to step up, and we continue to be blown away by their response. We cannot thank them enough for what they continue to do for Ole Miss Athletics."

In addition, the Forward Together campaign has now topped $137 million in commitments with $25 million in new pledges for the fiscal year, nearing the total campaign goal of $150 million.

As part of the $150 million Forward Together capital campaign, the south end zone is being renovated to add 30 luxury suites and 770 club level seats, and the west suites are all being refinished. While those updates will be completed this fall, the facility’s biggest changes are in store for 2016. The south field club will be built and the north side of the stadium will be transformed into an exciting new “front door,” complete with a plaza and bell tower. A green space will also extend the Walk of Champions from The Grove all the way to the new plaza. Closing in the north end zone seating will bring stadium capacity to 64,038 and put the polishing touches on one of the nation’s elite college football facilities.