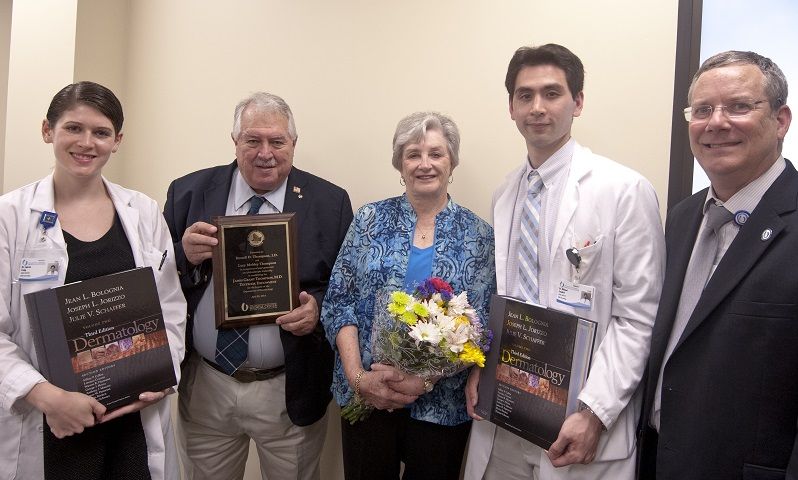 Dermatology residents Dr. Lauren Craig, left, and Dr. Michael Cosulich, second from right, are the first awardees of the James Grant Thompson M.D. Textbook Endowment for the Department of Dermatology established by Russell Thompson and his wife Lucy, center, to honor Thompson's father. The endowment supports the cost of textbooks for chosen incoming dermatology residents and helps expand the educational and research efforts of the Division of Dermatology. Also pictured: Professor and Chair of the Department of Dermatology, Robert T. Brodell, right.

In the field of dermatology, the late Dr. James G. Thompson helped write the book. These days, a gift in his name is helping UMMC residents pay for it.

For the benefit of the Department of Dermatology, the Thompson family, including Russell and Lucy Thompson of Ocean Springs, has established the James Grant Thompson M.D. Textbook Endowment in the name of Russell’s father.

The gift of $25,000 will help dermatology residents and/or fellows buy required textbooks and allow the Department of Dermatology to extend the reach of research and education.

The Medical Center recognized the Thompsons for their generosity and awarded textbooks to the endowment’s first recipients: residents Dr. Lauren Craig and Dr. Michael Cosulich.

“I believe my father would have said this is the best thing in the world,” Russell Thompson said of the presentation.

The donation represents “the perfect blend of my father’s passion for education and dermatology,” he said.

The Thompson family’s ties to the university are strong. A graduate of the University of Mississippi law school in Oxford, Russell Thompson first worked at the Medical Center as a biochemistry lab assistant for two years in the early ’60s. That’s where he met Lucy Mobley, his future wife and a 1959 graduate of UMMC’s School of Nursing.

Now, in their retirement, they are committed to remembering and honoring James Thompson’s eminent career.

During the presentation of the textbooks, Dr. Robert Brodell, professor and chair of the Department of Dermatology, praised “the profound impact he has had on the health of citizens in Mississippi.”

A medical pioneer, James Thompson was the state’s first board-certified dermatologist and the first president of the Mississippi Dermatological Society.

His reputation reached well beyond the state’s borders, as his son learned on a trip to Norway years ago.

“I was with a college group taking pictures on a fjord, when a man with a nice Southern drawl started talking to me,” said Russell Thompson, who once practiced law as a member of the Judge Advocate General’s Corps, U.S. Air Force.

“When I told him where I was from, he said, ‘I know only one person in Mississippi – Dr. James Thompson.’

The world of James Thompson began in Carthage in 1902, the year he was born.

Before earning his M.D. from the University of Tennessee in Memphis, he graduated from Ole Miss in 1929 with a B.S. degree.

After interning with the U.S. Public Health Service, he served on the house staff at Mississippi State Charity Hospital in Jackson and as assistant superintendent for one year. He finished his dermatology training at Columbia University’s Post Graduate Medical School and Hospital.

Among the many medical organizations and professional societies he led is the Mississippi State Medical Association (MSMA), 1951-1952, publishing a second-edition account of its history.

A professor of dermatology at UMMC, he was also on the staffs of several other Jackson-area hospitals.

Enumerated by the MSMA, his many achievements include being listed in Notable Americans of the Bicentennial Era, and receiving, in 1974, the Wilson Award of Honor by the Wisdom Society for the Advancement of Knowledge, Learning and Research in Education for “enriching the resources of the human mind and enabling the highest aspirations of the human spirit for the betterment of all mankind and future generations.”

During the July observance, he was remembered by former students and colleagues as a “typical Southern gentleman” known for his composure and sense of humor.

Those who spoke about him included Dr. Louis “Skip” Wise, a member of the UMMC affiliate faculty, and another early pioneer in the practice of dermatology; and Dr. Billy Walker, a dermatologist who also serves on the affiliate faculty.

Taught by Thompson at UMMC, Walker recalled a case of a patient with a persistent rash: “Physicians had tried everything to treat it, but nothing worked. Finally, Dr. Thompson was asked what he would do.

“He replied, ‘In that instance, I give him the full benefit of my personality.’”

For his part, Russell Thompson remembered his father as “a modest guy.”

“He loved his patients. He loved the practice of medicine. I believe he was good at it.”