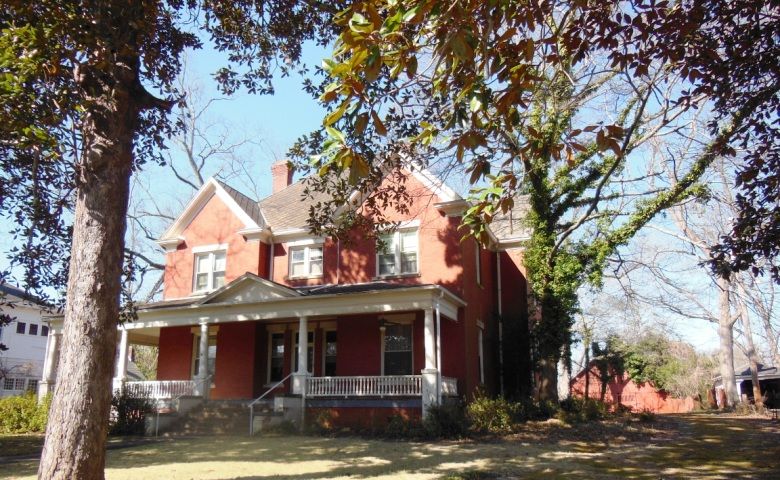 When Julia McCormac and her husband, Duncan, first bought their spacious house in Lafayette, Ala., in 1989, she wasn’t sure if the couple could get the most out of their historic seven-bedroom, three-bathroom home.

More than 25 years later, Julia has perhaps found the home’s greatest purpose – a continuous benefit to graduate students in the School of Nursing at the University of Mississippi Medical Center and an everlasting tribute to her husband.

The couple chose to leave their two-bedroom condominium in Sacramento, Calif., to move closer to family near Lafayette, a small community of little more than 3,000 that serves as the county seat of Chambers County, Ala.

Built in 1925, the 5,200-square-foot residence is the only two-story brick home in the town. It boasts large rooms with fireplaces, beautiful mantels, leaded glass windows, heart-of-pine floors and a large yard with mature trees, among other amenities.

The McCormacs enjoyed 14 years in the beautiful house, but after Duncan died in 2003, it was a bit overwhelming for Julia at times.

“We did a good bit of work on it ourselves,” said Julia, 71, a member of the School of Nursing’s Class of 1965. She stayed in Lafayette several years after her husband died. When she got more involved with the School of Nursing, she knew she was ready to come back to Mississippi.

After having moved to Brandon several years ago, Julia had been maintaining the house from a distance when a timely suggestion at a student nursing event this spring took root in her fertile philanthropic imagination. A conversation with a development officer turned to the house at 107 North Lafayette Street, and the gift officer suggested Julia consider donating it as an asset to the school.

Julia nurtured the idea for a few weeks before she decided to let the Office of Development help her make it grow. That’s when Julia began working with Natalie Hutto, director of planned giving, to make the generous gift of real estate.

A former School of Nursing chapter president of UMMC’s Alumni Association, she had a rich history of giving to the school, including the establishment of the Duncan McCormac Memorial Nursing Scholarship Award in 2004.

“Gifting this property was an ideal situation,” gift officer Sheila Henderson said. “We can use the net proceeds from the property to establish an endowment for the scholarship, which will now be in Julia and her late husband’s name.”

The award is presented annually to full-time graduate students in the School of Nursing who are in good academic standing and demonstrate financial need.

“Now that I’m going to endow it, it’s going to be given in equal parts to four master’s or Ph.D. students,” Julia said. “These women or men really need the money. Most of them have families and need to work, for one reason or another. Part of their program is clinical, and when they go into clinical, they can’t work – it’s too hard.

“There really are not many scholarships out there for them, and they’re most grateful.”

The scholarship is a significant part of the benevolent resume Julia has been building in the School of Nursing for more than 15 years.

Her involvement started when her former classmate and roommate, Hazel Winstead Herr, died in an airplane crash overseas in 1997, along with Herr’s husband. Julia initiated a giving campaign to honor the Herrs. Two years later, the handsomely furnished Class of 1965 Winstead-Herr Conference Room (room A239) was dedicated in the School of Nursing’s Christine L. Oglevee Building.

“When Hazel died, a couple of us in the class said, ‘What could we do?’” Julia said. “Hazel’s step-daughter sent me all the names and addresses out of her (Hazel’s) address book from over the years. I just sat down and wrote a letter to all these friends.

“They really came through.”

The year after the conference room dedication, members of the Class of 1965 agreed that the remainder of the funds should be used to support scholarships for the School of Nursing. It’s become somewhat of a giving tradition with Julia’s former classmates. She has encouraged the class to continue giving and to officially establish the Class of 1965 Scholarship Fund to help educate the next generation of nurses.

“That particular class is simply one of the most philanthropic classes we have here at UMMC,” Henderson said. “Some have already established scholarships and they all continue to give outright gifts.

“It’s just impressive what they’ve done and what they will continue to do.”

At a recent alumni luncheon at UMMC, Julia continued to encourage her classmates to provide for the needs of the state’s future caregivers.

“There are 13 of us left (from the original class of 17),” Julia said. “For the first time since graduation, all of the surviving class members were at the same place at the same time.

“We had lunch in the (Class of 1965 Winstead-Herr) Conference Room and I just proposed that if everybody left $5,000 in their wills, that would be a substantial amount for the school.”

In addition to the gift of her house, Julia also is working on a planned gift to endow a fund for the benefit and maintenance of the Winstead-Herr Conference Room.

She said the donation of her Alabama property brings her relationship with the School of Nursing full-circle.

“When I graduated (from the School of Nursing), I wasn’t interested in giving anything back,” Julia said. “There weren’t many scholarships then – if there were, they were scholastic scholarships.

“Getting involved the way I got involved (as nursing alumni chapter president), I got to know more about what the needs are. Now, we’ve got more recent graduates who are younger who can hopefully take things forward.”