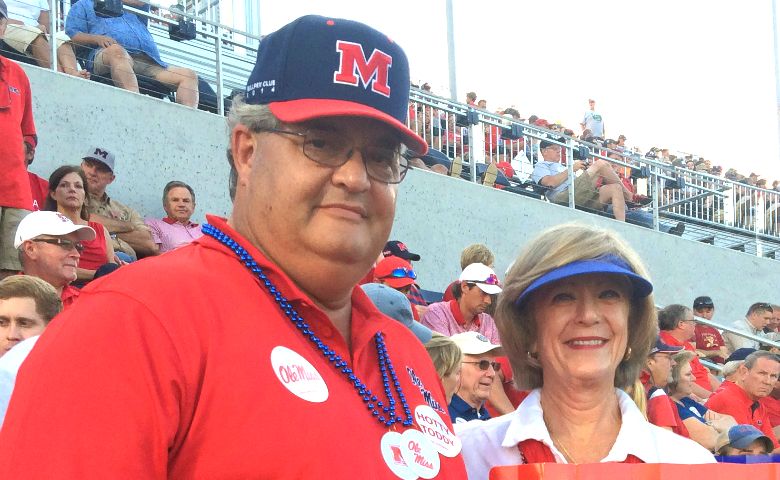 Johnny and Renee McRight celebrated their 42nd wedding anniversary in Omaha, Neb. with the Rebels at the NCAA College World Series.

When Johnny and Renee McRight began graduate school as young newlyweds, they did so on a tight budget with help from fellowships, grants and lots of sweat equity. Today, their generous gifts to the University of Mississippi are enabling graduate students to pursue research and advanced degrees, while also helping Ole Miss Athletics reach new heights.

“Grad school is tough. We’ve been there,” said Johnny McRight, who earned his undergraduate and graduate degrees in biology from UM in 1973 and 1975. “We know from experience that if your finances are stable, you can focus on your studies.”

The Greenville, Miss., couple created the McRight Biology and Speech Pathology Endowment in 2010 as a way of recognizing the role that education played in their fulfilling professional careers. Renee McRight, who earned her undergraduate degree in education in 1973 and graduate degree in communicative disorders in 1975 from UM, and her husband both noted UM professors who mentored them as they prepared for future careers in speech pathology and agricultural research, testing and product development.

Johnny McRight founded McRight Services, LLC. in 1976, primarily as an agricultural consulting firm. Renee formed a private practice to help adults and children with speech disorders. Yet after a few frustrating years for Johnny, he decided it was time to switch gears and “build a better mousetrap” for increasing crop yield. He then developed his own line of agricultural biostimulant and micronutrient products.

“Thanks to my studies under Dr. Bailey Ward, a plant physiologist at UM, my interest and understanding of plant nutrition really flourished,” McRight said. “He had me take several courses in pharmacy research with Ph.D. pharmacognosy students. I started developing this amino acid chemistry and vitamin chemistry as it applies to plant nutrition – the ‘aha moment,’ you could say. I developed the ability to know what was wrong with plants and what would fix them.”

Through an additional gift this past year, they have now divided their endowment, creating one for each department, so that scholarships can be awarded annually to graduate students in both programs simultaneously.

“The McRights have both vision and generosity,” said Dean of Liberal Arts Richard Forgette. “The College of Liberal Arts is truly thankful. This investment will have lasting benefits to these students, the university and the state.”

“Financial assistance allows our students the opportunity to submit scholarly papers to conferences, participate in organizations, further their research and fulfill clinical hours in a timely fashion. The School of Applied Sciences and the Department of Communication Sciences and Disorders are appreciative of their thoughtful and gracious support.”

“Our constant involvement in Ole Miss sports has been a major factor in our desire to also support academics,” said Renee McRight. “We believe the academic and athletic leadership truly understand that sports are what keep a vast majority of our alumni coming back. Following and supporting Ole Miss Athletics reminds us how critically important it is that we support academics.”

Not only did they make a major contribution to the Forward Together campaign, the McRights followed the Rebels to last year’s Music City Bowl, NCAA Basketball tournament and SEC Baseball tournament, regionals, super regionals and College World Series.

Indeed, this sports year – and the Diamond Rebs’ history-making crusade from pre-season to post-season in particular – held special meaning to the McRights’ and their 42-year marriage.

“The first year Ole Miss Baseball went to the College World Series was the year we got married, 1972,” said Renee McRight. “We were on our honeymoon when they were in Omaha. We always said we would go when they got there again, so this year, we finally got that chance.”

The McRights’ experience this summer traveling with the team and fellow Rebels fans encapsulates their decades-long relationship with UM and the Ole Miss family. Fans, players and players’ families – from Lafayette, La., to Omaha, Neb. – were making new friends and forming bonds, sharing rooms and meals and doing what Rebels do best: taking small-town, big-heart values and attitudes on the road with them.

“We met players’ grandparents, parents, aunts and uncles, and the players themselves. In Lafayette we met Will Allen’s parents sitting in the hotel lobby securing rooms for Omaha. We were unsure if they knew who we were, but we knew who they were. But then Will Allen’s dad gave us a hug and said, ‘We know you’ll be in Omaha because you’ve been everywhere else supporting the team.’ So we made our arrangements, too. They were appreciative of us being there. We really do feel like one big Ole Miss family.”

“And everywhere we went,” Johnny McRight added, “people would come up to us and tell us how much they enjoyed meeting and hosting the Ole Miss fans – that we were kind, we tipped well, you name it. Our fans really represent our university well.”

The Ole Miss Athletics Foundation is grateful to the McRights for their continued support.

“Johnny and Renee McRight epitomize what it means to be an Ole Miss Rebel,” said Keith Carter, senior associate athletics director and executive director of the Ole Miss Athletics Foundation. “Their history runs deep with our great university as does their generosity to both athletics and academics.  They have supported athletics in many ways throughout the years and their recent gift to the Vaught Society will allow us to keep pushing to our goal for the Forward Together campaign. We are extremely grateful for their unwavering resolve to help Ole Miss Athletics continue our pursuit of championships.”

“We recognize that we wouldn’t be able to do any of this,” Renee McRight added, “without the education our university provided us, so we both feel it is important to support academics as well as athletics.”

To discuss creating a scholarship fund in the program of your choosing and giving to the University of Mississippi, contact Denson Hollis, senior director of development for the College of Liberal Arts, at dhollis@olemiss.edu or (662) 915-5092. For more information on the Forward Together campaign or to make a gift to Ole Miss Athletics online, visit www.forwardtogetherrebels.com, or contact the Ole Miss Athletics Foundation at (662) 915-7159.