skip to Main Content
Character of deceased Rebel No. 38 honored 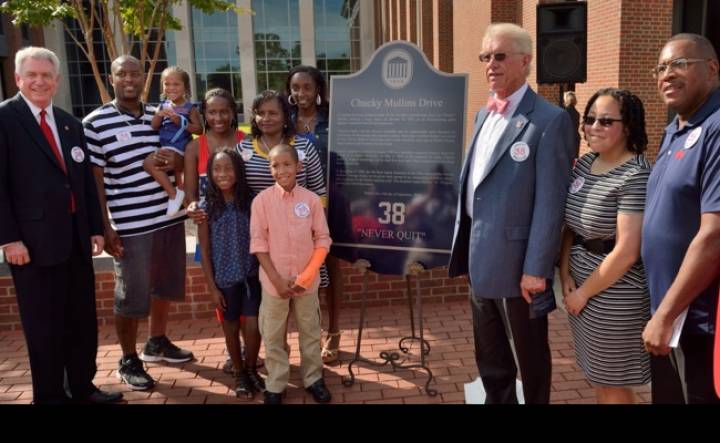 For the last 25 years, Chucky Mullins and his abiding spirit have touched the lives of the entire Ole Miss family. Now, with the formal dedication of Chucky Mullins Drive and the launch of the IWear38.com fundraiser, Ole Miss continues to honor his life and influence in a visible, memorable and most enduring way.

“It’s an emotional day for the entire university,” Athletics Director Ross Bjork said. “It’s bigger than athletics. It’s about life. It’s about moments that teach us how to overcome adversity and the attitude that Chucky had. We have to continue to propel that and this is a way to honor that legacy every single day.”

The dedication, held Friday at the Ole Miss Law School Courtyard, was not only an Ole Miss Athletics event, but a University of Mississippi event because of Mullins’ impact on the school he loved.

“His name has become a symbol for all of the things that we most value in ourselves: toughness, leadership, fun, respect, courage, hope and legacy,” Bjork said. “Those who have worn the No. 38 jersey know exactly what I’m talking about and they return this weekend to feel it once more.”

“Chucky’s spirit has been, and continues to be, a unifying force for Ole Miss like no other,” Ole Miss Chancellor Dan Jones said. “The naming of this drive will be a reminder for all of us and generations to come of Chucky’s desire to be given an opportunity. He wanted an opportunity. It’s a reminder of his commitment and dedication to excellence. He wanted to get everything out of himself that he could get. And it’s a reminder of his love for Ole Miss. He did love Ole Miss and he demonstrated that.”

His legacy endures today, Bjork said, because he was the quintessential Ole Miss Rebel.

“He was a fighter,” Bjork said. “He wasn’t a guy who automatically received a college football scholarship. He sat in Coach (Billy) Brewer’s office and he pledged his name that he was worthy and then he earned it. He didn’t have the speed of a lot of players, but he made up for it with heart. That’s a cliché that we use in sports too often, but it applies when talking about Chucky.”

“Learning I was a recipient of the Chucky Mullins Scholarship was one of the happiest days of my life,” said Acacia Santos, a sophomore biochemistry and mechanical engineering major from Southaven. “By following his example and doing my best, I hope to show Chucky my gratitude.”

As part of the weekend’s festivities, funds were raised for the Chucky Mullins Scholarship, awarded each year to students who either have a physical disability or who exhibit exceptional financial need.

The university also announced the launch of a new website – IWear38.com – where contributions can be made to the Chucky Mullins Scholarship and tributes to Mullins may be shared via social media.

“I don’t see 38 fading away,” said Carver Phillips, Mullins’ guardian. “I don’t see the Courage Award going anywhere. Year by year, it’s getting stronger, and we’re going to need to continue to keep this fight going.”

“Anyone who crossed Chucky’s path did not leave the same, so now forever we will be able to cross Chucky’s path right out here every single day and we will not be the same. We will push forward with his determination and unbelievable will for success with attitude and effort unknown to human kind.”

On Saturday in Vaught-Hemingway Stadium, the Rebels surprised fans and unveiled powder blue helmets as a tribute to Mullins and his team. Playing with a lot of emotion, Ole Miss defeated the Memphis Tigers, as the defense allowed just 104 total yards in a 24-3 win.

“Chucky would have been proud of the helmets and particularly, how the defense played,” Coach Hugh Freeze said. “He would have loved that. We’ll continue to honor his character traits: his selflessness and his attitude about life and against adversity.”

Plans are underway to auction off a few of the powder blue helmets through the IWear38.com website.

To contribute to the Roy Lee “Chucky” Mullins Memorial Scholarship Endowment, mail a check made payable to the University of Mississippi Foundation with the fund noted in the memo line to the UM Foundation, 406 University Avenue, Oxford, MS 38655. Online gifts can be made at www.umfoundation.com/Chucky. For more information, call 1-800-340-9542 or email umf@olemiss.edu.