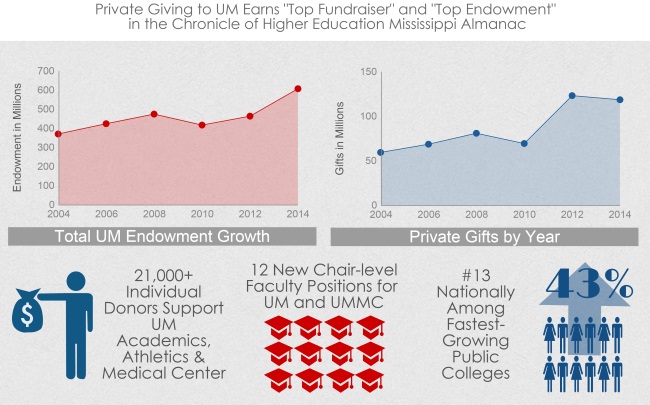 UM was ranked 13th nationally in recognition of its 43.1 percent enrollment growth from 13,135 in 2002 to 18,794 in 2012. Based on U.S. Department of Education data, the survey tracked enrollment growth at educational institutions from fall 2002 to fall 2012. It includes total headcount of full- and part-time undergraduate and graduate students. Percentages were rounded, but institutions are ranked based on unrounded figures.

The almanac also features individual state studies that report data such as faculty pay, minority enrollment, average ACT scores and more for educational institutions in each state. While most figures are reported on the whole or average for the state, a few data points are reported comparatively among research universities.

“Largest endowment” went to UM, as did “top fundraiser.” Data for these two comparisons were collected from the National Association of College and University Business and the Council for Aid to Education.

“Over the past year, 458 new donors joined the UM Foundation in our efforts to support University of Mississippi scholarships, athletics, faculty and other important endeavors that fulfill our mission,” said Wendell Weakley, the foundation’s president and CEO. “Every gift, every new endowment fund, every person makes our university stronger.”

This year, the university raised more than $118 million in private giving, the third-highest annual tally on record. While 2014 gifts were designated across UM schools, programs and campuses, a large percentage went toward elevating and recruiting faculty through creating endowed chair-level positions to both attract top teaching talent and retain professors who have helped Ole Miss programs earn national repute.

“Named, endowed faculty positions are powerful recruitment and retention tools,” Chancellor Dan Jones said. “Our donors understand that an investment in faculty makes a direct, positive impact on students, a solid return on their investment. We continue to seek and retain talented teachers to prepare, mentor and guide our students, as well as pursue important research.”

The Chronicle of Higher Education’s Almanac of Higher Education 2014 is available here. Individuals and organizations interested in providing additional private support to UM or learning more about giving opportunities can send a check with the desired program noted in the memo line to the University of Mississippi Foundation, 406 University Ave., Oxford, MS 38655, visit http://www.umfoundation.com/makeagift or call 662-915-5944.