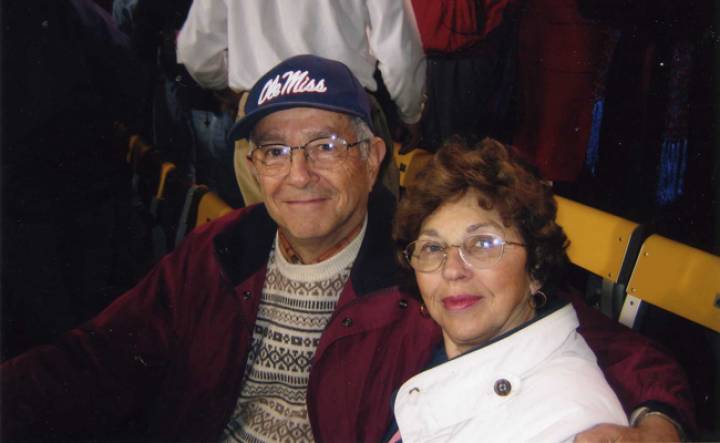 The late Thomas J. "Tom" Mattingly, left, is seen here with his wife, Barbara. The Mattingly family has provided a gift to name the equipment room in the Olivia and Archie Manning Athletic Performance Center in memory of their husband and dad, a longtime Ole Miss fan and supporter.

For the Mattingly family, Ole Miss football is about family. It always has been, and it most assuredly always will be.

The late Thomas J. Mattingly and his wife, Barbara, raised their three children – Olivia, Mitchell and David – in western Arkansas where each child attended Marion High School in Marion, Ark. While their address read Arkansas, the family's heart pumped Ole Miss through its veins.

When it came time for the kids to go to college, the choice to attend the University of Mississippi was a no-brainer. After Thomas J. started his company, Metro Logics, in 1980, each of the children joined him within the first 10 years of its existence.

It was after Thomas J. passed away that the family got together to find a way to remember him.

"Immediately after my father started his company, he started making donations to Ole Miss," Mitchell Mattingly said. "Two years prior to his death he donated to the building of the indoor practice facility. We got together as a family and made the decision that we would like to finish what my father started and make another donation to put his name on a portion of it. We felt like we needed to do something for it to be enduring."

After both of his parents passed away by the time he turned 21, Thomas J. had to work to provide for his younger brother and sister. Throughout his life, Thomas J. always rooted for Ole Miss and even converted Barbara, who grew up cheering for Louisiana State University, into an Ole Miss Rebels fan.

That love carried down to the children, who say it is a surreal experience to look back on their childhood and now see their father's name on the equipment room at the Olivia and Archie Manning Athletic Performance Center.

"That's what we wanted to do," Mitchell said. "When they first built the skyboxes (at Vaught-Hemingway Stadium), my dad was among the first people to get a skybox. We kept that skybox until my father passed away. What we decided we would not do after he passed away, just from an emotional standpoint, was keep the skybox. We just didn't feel like we could do it without him. Last year, I approached my mother, my brother and my sister, and I said, 'Look, if we're going to do a skybox we have to put our name in. So, we can get a skybox, or we can make a contribution to the school and have Dad's name last forever.'

"You can have a skybox if you're going to enjoy it like we did for 20-something years, but when you turn it back in there's nothing to say that Dad's name was ever there. We made the decision at that point to take that money and rather than put it in a skybox, to put it into something that would last forever."

With the Rebels preparing for another bowl game in their long and successful postseason football history, Mitchell said the future of the program is heading in a positive direction, and head coach Hugh Freeze's morals and character make it easy for people to support and root for him and the team.

"My father was our leader in life," Mitchell said. "That's what good fathers do. It was important to him and therefore it was important to us. We made the decision to discontinue our skybox for emotional reasons when he passed away, but it didn't take us long to realize that our passion for Ole Miss continues even without my father. That passion for Ole Miss football is something my father started and you can't take it out. You can't just snap your fingers and say, 'I think I'll pull for Alabama because they win all the time.' It's in your heart and you can't get rid of it. You love who you love. It's that simple."

To learn more about making a gift to support athletic programs, individuals and organizations are encouraged to visit www.ForwardTogetherRebels.com or contact the Ole Miss Athletics Foundation at (662) 915-7159.