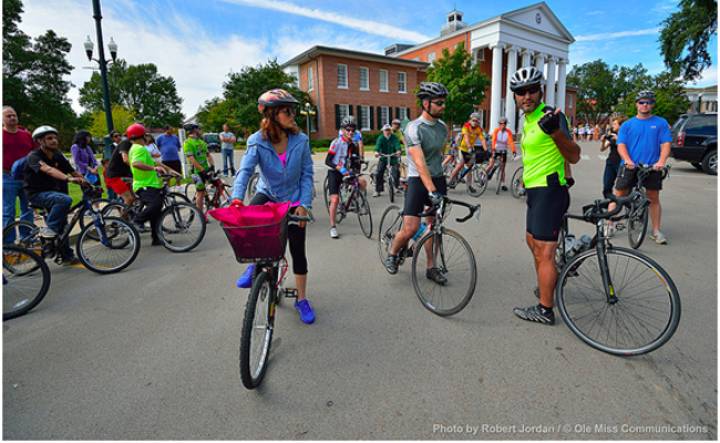 Local cyclists, friends and family are led in the 2013 Kevser Ermin Memorial Ride by Yavuz Ozeren, Ermin's husband, pictured front in green and black. Ozeren endowed a lectureship in health and kinesiology in Ermin's memory.

Kevser Ermin, a doctoral student remembered for her tragic 2011 death while cycling one clear October morning between Oxford and Sardis Lake, left a lasting legacy at the University of Mississippi beyond simply a parable about transportation safety and sharing the road. Thanks to her husband Yavuz Ozeren's recent gift to UM's Department of Health, Exercise Science and Recreation Management (HESRM), she will be known by future students for her many personal strengths and professional talents.

The Kevser Ermin Memorial Lecture in Health and Kinesiology will be an annual lecture series for faculty, students and area professionals to interact and learn from a leader in the field of health sciences. Ermin was an accomplished academic, athlete and volunteer; a daughter, sister, wife and aunt who cherished her family, both in Oxford and back in her native Turkey. Ermin's determined spirit continues to challenge all those who knew her to strive for lofty goals, shed assumptions about the potential of others, and to live passionate, healthy lives.

"Kevser was always very inquisitive – one of the best graduate students that I have worked with over my career," said Mark Loftin, associate dean of the School of Applied Sciences and professor of exercise science. "Kevser was a wonderful emerging scholar whose life was tragically cut short; this lecture series will honor her memory for many years."

"We've done many things to keep her memory alive through memorials and events, but we wanted this gift to go toward a legacy for her that reflected her research and her work," said Ozeren. "She wasn't just studying to get a degree or finish school; she lived her life as a part of her work. She did all she could to learn more about obesity, health, exercise science, physiology – she liked it. Our hope is that this will keep her research going through future students."

Ermin's career in sports began early. She played for the Anadolu University Female Handball Club from 1995 to 2005 and for the Turkish National Female Youth Team from 2001 to 2004. In 2003, she became a certified referee in the local female handball league in Eskisehir, Turkey, and received her degree in physical education and sports from Anadolu University.

Ermin met Ozeren, a research scientist at UM's National Center for Computational Hydroscience and Engineering and visiting scientist at the National Sedimentation Laboratory, in 2005 when she moved to Oxford to live with her sister, Nurhayat Tabanca, and study English so Ermin could continue her education.

In 2009, both Ermin's and Ozeren's families traveled from Turkey to Oxford to see Ermin receive her master's degree, Ozeren earn his doctorate. and the two marry in Johnson Commons Ballroom.

"She made learning English look so easy. She just did it and got it out of the way so she could continue her studies. In four years, she went from learning English, to getting her master's to working on her Ph.D. – she excelled so quickly that she was invited to teach in the department. Meanwhile, she was always socially active and volunteering."

Ermin was headstrong, meticulous and determined in all she did. "She was getting ready for a poster competition during graduate school, and she told me that she was preparing to win. I tried to explain to her that this was the first time she was competing in something like this and tried to prepare her for disappointment. But she won in her first try – she always prepared for perfection."

Her thesis director agreed. "Kevser was very accomplished; her thesis, Bone Mineral Density of Adolescent Female Tennis Players and Nontennis Players, was published in the Journal of Osteoporosis, a prestigious journal," said Scott Owens, associate professor of HESRM. "She really enjoyed the research process. Kevser was well-liked as an instructor and enjoyed teaching. Having this lectureship in her honor will allow us to bring in nationally recognized speakers to serve as role models for our graduate students and help them get a feel for high-level research. We currently have a committee looking for our first lecturer, scheduled for April 2014."

Ermin had a major impact on the community, though only in Oxford a few years. Following her death, a number of events have honored Ermin. Cowboy Mouth, a rock band popular with the Ole Miss community, was a favorite of Ermin's. Upon the chance to meet the band just months before her death, Ermin asked lead singer Fred LeBlanc if he would remember her when the band returned to Oxford, as she attended all their concerts. LeBlanc and his band came back and held a memorial concert for Ermin November 17, 2011. Other memorials include:

• The 2011 Tupelo Shakerag Half Marathon, for which she had been training, was dedicated to Ermin.

• The 2012 and 2013 UM Rebel Man Sprint Triathlon was dedicated to her and the fund it supports was renamed the Kevser Ermin Professional Development Fund.

• The 2012 IV Area Special Olympics was dedicated to Ermin in honor of her many hours as a volunteer organizer.

• A HESRM laboratory was dedicated and renamed the Kevser Ermin Applied Physiology Laboratory.

• In May of this year, the Kevser Ermin Library was established at the Cemal Mumtaz Anadolu Teacher High School in Eskisehir, Turkey, by family and friends in honor of Ermin's love of teaching and learning.

• Each year, a memorial ride following Ermin's last route to Sardis Lake is convened by the Oxford cycling community, friends and family on the anniversary of her death.

Tabanca, Ermin's sister, is a research scientist for the National Center for Natural Products Research in UM's Thad Cochran Research Center. She observed Ermin adopting Oxford and Ole Miss as her new home.

"Her family was always her priority. Even though it was difficult to leave her parents and sisters in Turkey, she loved living in Oxford and being a part of Ole Miss," said Tabanca. "She was proud and happy to introduce Turkish culture and food with friends and colleagues here. She was a giving, helpful person who loved to spend time with her family, husband and friends. She will be greatly missed."

Tabanca, Ozeren and her family are appreciative of the efforts the community, university, and especially those in the HESRM department have made to share Ermin's spirit and provide a legacy.

"Kevser will forever be a symbol of love, beauty, health and fitness, fun and life," said Tabanca. "She was a free, strong and brave spirit. Kevser was passionate about everything in her life: health and fitness, her studies and work, her family and friends. Kevser never stop living, challenging and achieving her goals. She continually reached for new heights."

Ozeren agreed, nodding. "Kevser exuded the ultimate qualities of an athlete – she lived the life of an athlete, both mentally and physically. She was disciplined in everything she did, never giving up. I learned so much from her. I recently competed in an athletic event, a triathlon, for the first time ever. I felt closer to her, because I finally understood that side of her—competition and athleticism—from firsthand experience. I was always inspired by her, and I try to continue to live and practice the things that she taught me."

Individuals and organizations interested in learning more about providing private support to the Department of Health, Exercise Science and Recreation Management can contact Michael Upton, director of development, at 662-915-3027 or mupton@olemiss.edu.

Gifts may be made to the Kevser Ermin Memorial Lecture in Health and Kinesiology Endowment by sending a check with the fund noted in the memo line to the University of Mississippi Foundation, 406 University Avenue, Oxford, MS 38655 or by visiting www.umfoundation.com/makeagift.