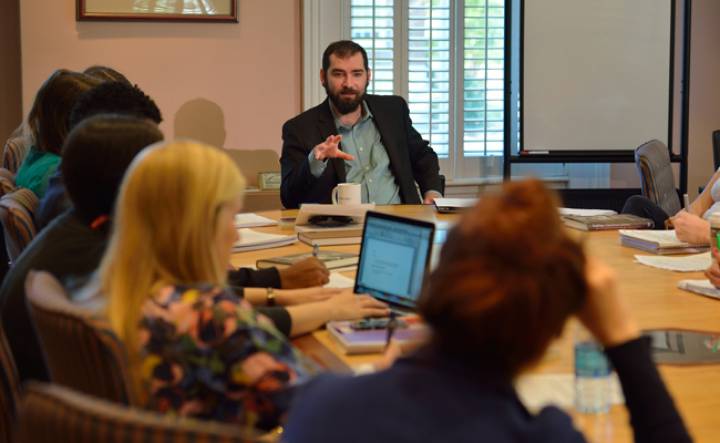 Zac Henson, a post-doctoral fellow, teaches a foodways class in Barnard Observatory, home to the Center for the Study of Southern Culture. Generous private support has provided an endowment for a permanent professorship in the academic study of foodways. UM is searching for an expert who will fill the position beginning with the 2014-15 academic year.

Thanks to generous contributions from individuals and foundations, the Southern Foodways Alliance (SFA), an institute of the University of Mississippi's Center for the Study of Southern Culture (CSSC), has, along with the College of Liberal Arts, endowed a professorship in the growing academic study of foodways. UM has launched a search to fill the position for the 2014-15 academic year.

"The University of Mississippi's academic environment is greatly enriched when we are able to offer classes and faculty members representing new fields of study," said Glenn Hopkins, dean of liberal arts. "We are deeply grateful to generous alumni and friends who are providing support to bring a foodways expert to our faculty. The study of foodways provides another important facet for our students to explore in understanding the world around them. This scholarly study offers a different avenue for gaining a heightened sense of various cultures."

With the help of a gift from the Chisholm Foundation of Laurel, Miss., the CSSC and SFA have co-hosted a postdoctoral fellow in Southern foodways since fall 2011. The fellow has taught undergraduate and graduate classes on Southern foodways and its relation to other fields such as history, literature, African-American studies and environmental studies. With the hiring of a tenure-track professor, the CSSC and the SFA are able to make a stronger commitment to the teaching of foodways.

"The programs of the Southern Foodways Alliance have helped make the University of Mississippi one of the leading places in America to study the relationship between food and culture," said CSSC Director Ted Ownby. "Southern studies students have benefited for three years now from a postdoctoral teaching fellow offering vibrant classes on Southern foodways. Now it's time to make that situation more permanent with a faculty member who will teach in Southern studies and in another area. The new faculty member will teach at least one foodways seminar, team teach with other Southern studies faculty and teach courses in another department, while also collaborating with the Southern Foodways Alliance."

SFA Director John T. Edge notes the growing popularity of undergraduate- and graduate-level food studies programs. "In recent years, we have seen more and more students enroll in the master's program in Southern studies with a specific interest in foodways," he said. "We are able to offer direct experience with the SFA to some of these students through graduate assistantships. A tenure-track foodways professor will telegraph the SFA's commitment to the academic study of Southern foodways. It will bring to the Center for the Study of Southern Culture talented undergraduate and graduate students who want to study the ways in which food both shapes and reflects their worlds."

Becky and Ron Feder of Ocean Springs, Miss., stepped forward with the initial gift to create the SFA endowment in 2003. "After John T. Edge shared his vision of what Southern Foodways at Ole Miss would encompass, Becky and I were totally astonished by its brilliant appeal," said Ron Feder. "For the first time, dedicated, enthusiastic academics would undertake a rigorous, scholarly examination of Southern food culture, from farm to table, in diverse contexts like holidays, family traditions, styles of preparation, drink, music, religion and race."

Edge expressed his thanks to the Feders and other friends who have built the endowment to its present level. "It's exciting and gratifying to receive such generous support from people who believe in the mission of the SFA and the Center. We've earned support from throughout the nation – including a significant gift from the Cockayne Fund directed by Eliza Brown of San Francisco, California, a longtime supporter of our biannual compendium of great writing, Cornbread Nation. We have also attracted support from just down the road in Louisiana, by way of Alan Franco of New Orleans."

Donors Eliza Kraft Olander and Brian McHenry of Raleigh, N.C., also believed in SFA's vision of a foodways professorship. "We have had the good fortune of being involved in the SFA for almost five years now. Our love of great food, drink and incredibly talented folks drew us to this valuable organization. More recently, the SFA's mission to serve a new generation of foodways-focused students inspired us to make a contribution to the professor fund," said Olander.

Kristie and Charles Abney of Atlanta, Ga., made a generous contribution to the foodways professorship endowment, too. "Today's college students are increasingly interested in food, food cultures and food systems," said Kristie Abney. "The foodways professorship will be a lasting asset to Southern Foodways Alliance work, both at the University of Mississippi and throughout the nation."

The mission of the SFA – based at UM since its 1999 founding – is to document, study and celebrate the diverse food cultures of the changing American South. The membership-supported institute directs an annual Southern Foodways Symposium, as well as publications, numerous lecture series, film screenings and other events. The SFA's oral history program, widely recognized as the most innovative in its field, has collected almost 800 interviews, while the SFA film initiative has produced more than 50 films. More recently the SFA began expanding its work into UM classrooms.

Individuals and organizations can make gifts to support the Southern Foodways Alliance or the Center for the Study of Southern Culture by mailing a check with the endowment noted to the University of Mississippi Foundation, 406 University Avenue, Oxford, MS 38655; visiting www.umfoundation.com/makeagift; or contacting Nikki Neely, development officer for the CSSC at 662-915-6678 or nlneely@olemiss.edu.

The Center for the Study of Southern Culture at the University of Mississippi investigates, documents, interprets and teaches about the American South. CSSC emphasizes academic programming as the foundation of its work, offering both undergraduate and graduate programs in Southern Studies through more than 60 courses taught by faculty in 10 departments. CSSC houses two institutes, the Southern Foodways Alliance and the Media and Documentary Projects Center. By teaching classes in foodways, the CSSC seeks to expand on the academic and educational strengths developed since its founding in 1977. For more information, visit www.olemiss.edu/depts/south or www.facebook.com/SouthernStudies. For more information about the Southern Foodways Alliance, visit www.southernfoodways.org.