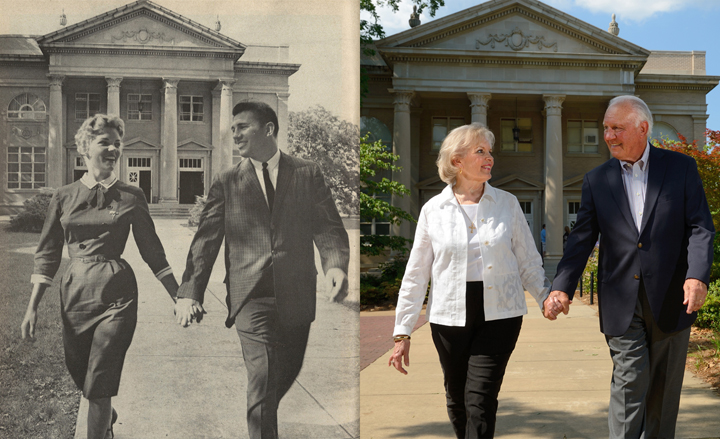 Kay and Warner Alford are pictured during their college days in 1960 and now as longtime contributors to the life of Ole Miss. The University of Mississippi Foundation Board has established a scholarship in their names, and alumni and friends are encouraged to make gifts in their honor.

A full-page photo in a September 1960 issue of Sports Illustrated — accompanying an article on the University of Mississippi and its upcoming football season — captured a beautiful Kay Swayze and the handsome Warner Alford walking hand in hand as students. It turned out to be a magical year, as Alford co-captained that SEC and national championship football team.

The couple went on to marry, raise a family and weave their lives into the tapestry of Ole Miss. Alford served in two high-profile leadership positions at his alma mater: athletics director and executive director of alumni affairs. He now continues to propel the university forward by helping attract private gifts for academic programs and scholarships, with wife Kay sharing his commitment.

To honor the Alfords' longtime service and lasting contributions, the University of Mississippi Foundation has created the Warner and Kay Alford Ole Miss Opportunity Endowment with a $50,000 gift and invites alumni and friends to help build the fund. Annual income from the endowment will provide Ole Miss Opportunity scholarships to academically deserving students from lower income families in Mississippi.

UM Chancellor Dan Jones said the Alfords have opened many doors for the university.

"Warner and Kay Alford have made it their life's work to help strengthen the University of Mississippi through academic, athletics and alumni programs. We are deeply grateful that these two extraordinary individuals have chosen to invest so much of their time, talents and energy into Ole Miss. Just as this scholarship endowment will honor them in perpetuity, the impact of the Alfords' contributions will be felt for generations."

Chancellor Emeritus Robert Khayat, who was Alford's college roommate and teammate for four years as well as friend of more than five decades, echoed that sentiment.

"Kay and Warner are in a group of Ole Miss people who are inseparable from the University of Mississippi. One of the most challenging jobs on campus is serving as athletics director because athletics is the most emotionally charged activity associated with the university. While Warner was serving as athletics director and then later as the alumni affairs director, he and Kay constantly built relationships to keep alumni and friends engaged with their alma mater and graciously opened their home on many occasions. Their friendship has been life-enriching."

Kay Alford grew up in the Oxford-university community with her father, the iconic Tom Swayze, as head baseball coach and football recruiter, one of the first in the SEC. Warner Alford hailed from McComb, Miss., playing football for the McComb High School Tigers and planning to continue his collegiate career at Louisiana State University. Coach Swayze persuaded the young man to choose Ole Miss instead. On Alford's first Sunday in Oxford, the Swayze family hosted Alford, Khayat and another player, the now late Ken Kirk, for lunch.

"I remember turning to Robert and saying, 'If I had known Coach Swayze had a daughter, I would have committed to Ole Miss earlier,'" Alford said, smiling. "The only time I could see Kay was in church on Sundays because she was a high school senior. Finally, in the spring of my freshman year I got up the courage to ask her out.

"Ole Miss is home — some of our best memories are here," Alford continued. "We have very emotional ties to this university. We've always truly felt that our friends and colleagues are family. Being here has never been a 'job.' It is something we dearly love. We are overwhelmed and deeply honored by this scholarship."

Kay Alford said she is pleased the scholarship will give young people the opportunity to enroll at Ole Miss. "I hope that they will take advantage of all the opportunities here. They will reap the results of this experience the rest of their lives, and they will be attaching themselves to a great group of people. It's a wonderful feeling to gather into the fold of Ole Miss. This is a great university whose continued excellence has been stunning."

David McCormick of Pascagoula, Miss., an attorney with Cumbest Cumbest Hunter & McCormick, PA, is familiar with the Alfords' influence.

"As a fan of Ole Miss football, I have known of Warner Alford's contributions to the Ole Miss family since grade school, but my wife, Susan, and I really got to 'know' Warner and Kay when we served as president of the national Ole Miss Alumni Association. Susan and I can truly attest to the character and generosity of Warner and his family not only to Ole Miss but also the Oxford community," he said.

"During Warner's tenure as executive director of the Alumni Association, membership grew and The Inn at Ole Miss became a reality in large part due to his leadership and guidance. There is no one more dedicated to Ole Miss than Warner, and he embodies all that is a 'Southern gentleman.' He makes everyone he greets feel at home and special," McCormick continued. "Warner's energy and passion for Ole Miss is due in no small part to Kay, his soul mate of more than 50 years. I can't imagine my life experiences at Ole Miss without the inclusion of the guidance and involvement of my friends Warner and Kay Alford. To honor the Alfords with a scholarship endowment will continue to bless the university they hold so dear."

"Warner and Kay are respected and loved by our alumni and friends," she said. "Warner is unique in that people usually think first of his roles as a former athlete and athletics director, but his influence goes far beyond those circles. He is unwavering in his commitment, as is Kay, to every facet of Ole Miss. He knows the challenges facing public universities as far as the level of funding needed to pursue relevant and meaningful programs, and he works tirelessly to attract gifts and mentor development officers."

Jon Turner of Jackson, Miss., a partner in the accounting firm BKD, LLP, has collaborated with Alford for decades — first when Turner was a student and then when he and other young alums formed the Rebel Club of Jackson, and Warner was the athletics director. Their work together continued.

"The year I served as national alumni president was Warner's first year as executive director of alumni affairs, and we worked together on the Ole Miss First scholarship initiative and The Inn at Ole Miss building campaign. The alumni director role was a great fit for Warner and Ole Miss," Turner said. "Warner loves people, and he knows almost everybody in the Ole Miss family. His leadership and relationship-building skills are the reason many private contributions have made their way to Oxford.

"It's most appropriate that there would be a permanent scholarship in Warner's and Kay's names; they have been part of the fabric of a couple of generations of the Ole Miss family. This is one way their lifelong contributions to our beloved university will be honored and at the same time help future generations experience Ole Miss," Turner said.

Dr. Chance Laws of Columbus, Miss, a physician who also served as president of the national Ole Miss Alumni Association, recalls the high points of working with Alford. "Warner continues to be the ultimate, consummate Ole Miss ambassador who radiates love and commitment for everything Ole Miss. When we worked together, it took forever to walk across campus with him, as he had to stop and talk with genuine interest to everyone we saw. He could have taught Dale Carnegie much about people skills.

"At times Warner has said that Ole Miss is his family business. Everyone knows Warner exemplifies the way a family member loves the family business.  In addition, and most assuredly, all who come in contact with Warner feel his love. Kay Alford is an equally lifelong, dedicated Rebel, and her poise, grace and love continue to be invaluable to Ole Miss as well as to Warner."

Alford's experience at Ole Miss was marked early by earning three letters as a guard on the football team from 1958 to1960. He received undergraduate and graduate degrees in business, while Kay Alford pursued a liberal arts degree. They married in 1961 and joined the Alford family retail business in McComb. They returned to Ole Miss for Warner to serve as a graduate assistant under Coach John Vaught. A 1966 move took them to Laurel, Miss., where he coached at R.H. Watkins High School before becoming the defensive coach a year later at Davidson College. He served as assistant coach and linebacker coach of Georgia Tech from 1968 through 1970, when the team won the Sun Bowl Championship.

Alford returned to Ole Miss in 1971 as the defensive line coach of Coach Billy Kinard's staff. His leadership as athletics director from 1978 through 1994 contributed to Ole Miss' tremendous growth in facilities and private funding, an increased emphasis on the graduation rate of student-athletes and the expansion of varsity sports from eight to 15. Alford was inducted into the M-Club Alumni Hall of Fame in 1999 and the Mississippi Sports Hall of Fame in 2003.

Additionally, he was a vice president with Mississippi Diversified Corporation from 1994 to 1999, before his selection as the University of Louisiana-Monroe athletics director. He served there until he was named vice president and national sales manager of Assurant Group's Indirect Auto in 2001. Alford returned to Ole Miss and held positions with the UM Foundation, Lott Leadership Institute and Ole Miss First, before being tapped to serve as executive director of alumni affairs. His leadership from 2004 through 2008 provided oversight for the $21-million The Inn at Ole Miss. He continues as a consultant with the UM Foundation and University Development.

The Alfords are the parents of three grown children, all of Oxford and all Ole Miss graduates: Swayze (Melinda) Alford, Phyllis (Darrell) Daniels, and John (Michelle) Alford III. They enjoy their seven grandchildren: Lilli and Grace Alford; Grant, Clayton and John Swayze Daniels; and John Warner IV and Jude Alford.

Individuals and organizations interested in making a gift to the Warner and Kay Alford Ole Miss Opportunity Endowment can send a check with the fund noted in the memo line to the University of Mississippi Foundation, 406 University Avenue, Oxford, MS 38655; contact Debbie Vaughn at 662-915-1687 or dvaughn@olemiss.edu; or visit www.umfoundation.com/makeagift.