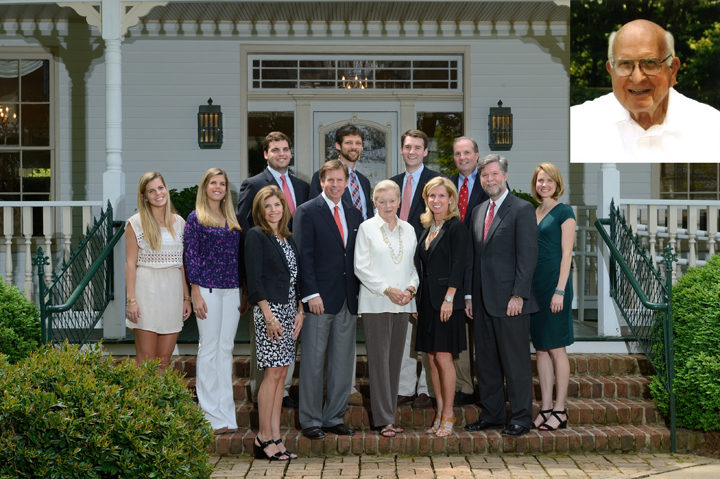 If you wanted to find Royal White during a University of Mississippi football weekend, you could count on him being in the Grove, basking in the company of family and friends. If you wanted to look up the businessman and lawyer in the Jackson, Miss.-area, you could find him pursuing his career or devoting time to his church. He was deeply devoted to people he loved and institutions he valued.

For these reasons and more, his family has established the C. Royal White Memorial Scholarship in the Ole Miss School of Business Administration to pay tribute to his life and influence. A major gift from his son Charles R. White of Birmingham, Ala., his daughter Debbie Perkins of Wellington, Fla., and their families have created the endowment with scholarships designated for students with financial need.

"One early morning my wife, Mary, and I were running on the Oxford campus during a football weekend, Charles said. "We were on the Walk of Champions sidewalk with all the inscribed bricks with names of alumni and friends. She suggested that our family needed to do something to honor my dad's life — something that would be meaningful to him — and the idea of the scholarship was born. My father would have liked that very much, I believe."

Jeanne White agreed with her son. "Royal's family was an Ole Miss family, and he gave no thought to going elsewhere. Royal often told young people that they should all enjoy college because it was the happiest time of life. He felt that about Ole Miss. He continued his involvement with the university because of friends, relatives, children, grandchildren and football. He loved the Grove and had his own spot for years, then later claimed the Birmingham tent as his own."

Royal was a natural leader as an Ole Miss student, serving for two terms as president of the Kappa Sigma fraternity and being elected "Man of the Year." He kept honing those leadership skills with great success in his career and civic responsibilities.

"His generation stayed in Mississippi, said Charles, an executive managing director at the investment firm Sterne Agee in Birmingham. "So many people around the state identified with them, and my dad knew so many people everywhere. My dad was defined by his integrity in business, which always put him in a position of strength and respect. He was an extremely generous man, keeping his own grandfather's legacy alive by helping others."

That philosophy apparently has been passed down because the White grandchildren suggested the scholarship be directed to students with financial need to realize the most impact. They also are involved in careers and charities that help improve educational opportunities for children and others.

Ken Cyree, dean of the School of Business Administration, expressed appreciation for the scholarship for students who plan to pursue banking careers, as Royal White did. "We deeply appreciate Charles and Mary White and the rest of the White and Perkins family for funding this endowment in memory of Royal White, a superb businessman and extraordinary human being. It will be rewarding for the White family and this university community to watch these scholarship recipients earn degrees and go on to make meaningful contributions. Charles is one of our highly regarded business graduates who continues to provide critical support to our programs."

When Royal completed his time at Ole Miss, he joined the U.S. Air Force as a second lieutenant and was stationed in Texas, California and Missouri. He trained as a navigator/bombardier, and after his service was completed, White returned to Jackson, attended the Jackson School of Law and was admitted to the Mississippi Bar in 1962.

While maintaining a law practice, Royal became a principal with the White Systems Savings and Loan Association, becoming CEO when the company became a separate entity. Upon obtaining a Federal Charter in 1975, other parts of the business were renamed Consumer National Bank and he served as a vice president and eventually became its chairman and CEO in 1991, until a merger with State Bank and Trust Company in 2005.

Royal also served 12 years as president of the Mississippi Consumer Finance Association, an organization co-founded by his father in 1958, and established the association's political action committee, one of the first in the state.

While Royal's leadership qualities first bloomed during his Ole Miss years, there was one decision he later regretted, said Jeanne White. "He spoke proudly of his involvement in hiring bands from near and far to come to his fraternity's parties, claiming his fraternity always had the best. He and several friends once went to Memphis to check out an entertainer named Elvis but weren't impressed. Oops!"

White was also well-known by the campus police because of his black Studebaker that always seemed to be parked in the wrong place. The officers finally asked him to park off campus because of their weariness in writing him tickets, according to his stories to his family.

"My first memory of Royal was an effort on my part to arrange a blind date for him with one of my friends," said his wife, a Missouri native. "After my convincing argument about this idea, his comment was that I sounded a lot like his mother. Shortly afterwards we started dating."

The Whites, married 55 years, were founding members of Lakeland Presbyterian Church, a church established in 1990 to serve the growing population of Flowood, just outside Jackson in Rankin County. The church benefited from Royal's skills with a bulldozer, as he dedicated his time to working on the parking lots and the building's site preparation.

Charles and Mary White are both Ole Miss graduates, as well as their daughter Elizabeth. Their children Matthew and Virginia are current students. Debbie White Perkins, attended Ole Miss before transferring to Auburn University to pursue an interior design degree. She and her husband Chip Perkins are the parents of two children, Sara and Charles, and they all enjoy coming to Ole Miss and the Grove for family gatherings.

The C. Royal White Scholarship Endowment is open to receive gifts from individuals and organizations by sending a check with the fund noted in the memo line to the University of Mississippi Foundation, 406 University Avenue, Oxford, MS 38655; contact Tim Noss, development officer of the School of Business Administration, at 662-915-5932 or tlnoss@olemiss.edu; or visit www.umfoundation.com/makeagift.