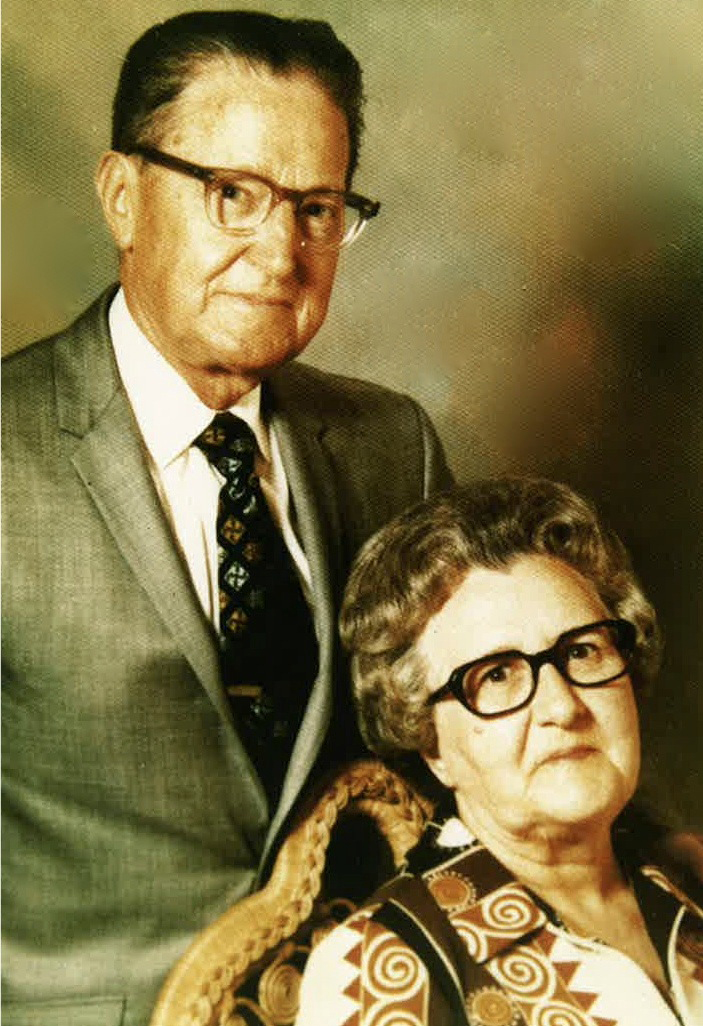 Mr. and Mrs. Thomas Everett of Meridian, Miss. created the Everett-Williams Memorial Scholarship Fund with the help of their nephew, Mr. William McMullen.

After 28 years of stewardship, University of Mississippi School of Law alumnus and 1848 Society member William H. McMullen of Charlotte, N.C., was pleased to finally see his labor of love come to fruition. Recently, McMullen had the chance to meet the first recipients of the Everett-Williams Memorial Scholarships, products of the fund he helped his uncle initiate in 1984.

Thomas Marshall Everett of Meridian, Miss., McMullen's uncle, seeded the fund with an initial gift of $90,000 to help deserving students pursue a college education. It was to be managed by an out-of-state foundation, initially the Southern Baptist Foundation of Tennessee. In 2008, McMullen coordinated the transfer of the fund to the University of Mississippi Foundation, creating two four-year scholarships that total $13,000 annually: one for the Sally McDonnell-Barksdale Honors College (SMBHC), the other for Ole Miss First (OMF), a scholarship program that rewards scholastic achievement and leadership. OMF offers mentoring opportunities to recipients in addition to a financial award.

Everett's one condition of the fund was that the total endowment had to reach $1 million before any distribution was allowed. Slowed but undeterred by the economic recession, the operations committee of the Everett-Williams Memorial Scholarship announced its first scholarship awards almost three decades after Everett's first contribution. The deserving recipients would be incoming honors students Logan Wilson and Davelin Woodard, also an Ole Miss First Scholar, in 2012.

Wilson came to UM from Hattiesburg, Miss., where he graduated second in his class at North Forrest High School in 2012 and was chosen for the school's Hall of Fame. He was class president all four years and president of the Student Council. Named a Mississippi Rural Medical Scholar, he also won awards in English, anatomy and physiology, and trigonometry/pre-calculus.

After arriving at UM, Wilson made an almost immediate impression at SMBHC. Wilson is "electric," said Douglass Sullivan-Gonzalez, dean of the honors college. "Logan is so engaging. Everyone just melts around him – and his grades are stellar to boot. He maintained a 4.0 GPA all year in an honors pre-professional health track."

Receiving the Everett-Williams Memorial Honors Scholarship helped Wilson decide among his college options. "I was unsure about where to go until I got the offer. I considered going out-of-state, but this scholarship, coupled with everything the honors college offers, was an opportunity I couldn't pass up." Wilson, now a rising sophomore bio-chemistry major with plans to pursue orthopedic surgery, also joined UM's IMAGE program (Increasing Minority Access to Graduate Education). IMAGE is funded by the National Science Foundation, and strives to increase minority entrance in graduate school in the fields of science, engineering and mathematics.


When asked if SMBHC surprised him in anyway, Wilson said it did not. "I was coming because I expected to be challenged. I like that our professors expect more from us; not only do they want us to grasp the material, they want us to master it. Dean Sullivan-Gonzalez and other administrators have a true open-door policy. They set high standards and expect us to achieve them but are willing to help in any way to get you there."

Davelin Woodard of Oxford, Miss., the Everett-Williams Memorial OMF Scholarship recipient, is a rising sophomore and SMBHC student. "I am very grateful for this scholarship," said Woodard. "Receiving it has enabled me to pursue my dreams."

Woodard graduated top of her class from Water Valley High School where her mother, also an Ole Miss graduate, teaches. "Since I was old enough to think about college, Ole Miss has been my preference," said Woodard. "Although I probably should have, I didn't even apply to any other universities. I knew in my heart that this was the right college for me. Every time I visited the campus I knew I wanted to be part of this family."

During her freshman year at Ole Miss, Woodard volunteered tutoring elementary students and worked in the UM Writing Center. She made the Chancellor's Honor Roll, and was inducted into Phi Eta Sigma honor society. Woodard was also accepted into the Early Entry Nursing Program at the University's Medical Center. She will transfer to the Jackson campus after her sophomore year with hopes of becoming a nurse anesthetist.

"These scholarships give our program the opportunity to engage high-performing students like Davelin and Logan as citizen scholars," said Sullivan-Gonzalez. "Not only can we attract students of their caliber, we can also offer them a quality honors education without accumulating debt – which is worth its weight in gold."

"It was an honor to meet Mr. McMullen," said Wilson. "I was glad to have the opportunity to shake his hand and hear the history of his family, and how they came to dedicate this scholarship which has helped me and will help others."

One of 13 children born to James Sellers Everett and Minine Lee Fanning Everett of Hickory, Miss., Thomas Everett wished to name the scholarship in memory of his parents as well as the parents of his wife, Jane Williams Everett.  Elias George Williams, Sarah Elizabeth Harris Williams, and Mr. and Mrs. Everett all were born, lived and died in Newton County, Miss.

"Many of the Everett children, especially the women, went to college which was rare in the '10s and '20s," told McMullen. "The story goes, at least for my mother, that the experience of farming cotton was enough to drive anyone elsewhere to look for work. About half of them ended up in Washington, D.C., including my uncle." McMullen's mother, Angie Everett McMullen, finished at Clarke Jr. College in Newton, Miss. in the late 1920s.

Tom and Jane Everett moved to Washington, D.C., as a young couple. Tom worked in retail and sales, while Jane worked at AT&T as a long-distance telephone operator. They eventually settled on Cathedral Avenue, where McMullen and his parents visited frequently.

After retiring, the Everetts moved back to Meridian to be help care for brothers and sisters during illnesses. Tom Everett also traveled to Virginia to help care for his sister, McMullen's mother, during her recovery from cancer in 1978 to 1979.

It was later in 1984 when Everett asked his nephew to help him establish the endowment. "I visited Uncle Tom after Aunt Jane's death and we would talk about their dreams and desires. Over several years, we finally prepared an agreement acceptable to Uncle Tom," said McMullen. Upon his death in 1997 at age 93, the majority of the Everett estate was transferred to the fund.

"Uncle Tom was a product of the depression era," said McMullen. "His primary interest was the preservation of the corpus of money. He followed the stock market and was dedicated to being a good financial steward. But he was also a steward of our family, always caring for others in times of illness or hardship."

McMullen was eager to help his uncle navigate leaving this legacy, as McMullen also came to Ole Miss to focus on studies, not to worry about how to pay his tuition.

"I was lucky to be able to complete law school in 1969 by just taking out a few manageable loans and working on the law journal for a small stipend. Back in those days the cost of law school was not what it is now. For today's students, to borrow to go to school can be in the six-digit figures."

McMullen and his wife, Kaye, are philanthropically active in their home city of Charlotte, N.C. as well. In 1979, the couple established the Children's Medical Fund through the Foundation for the Carolinas in honor of their daughter, Amy McIntyre. This fund has awarded more than $500,000 to provide hundreds of children and their families medical treatment and vaccinations, as well as funding pediatric cancer research. McMullen is Of Counsel with Cranford, Buckley, Schultze, Tomchin, Allen and Buie, P.A.

"I greatly admire the vision that Bill McMullen has shown in positioning this fund for growth and making it available for so many students now and for decades to come," said Wendell Weakley, president and CEO of the UM Foundation. "He has worked dilligently to get us to this point and put this remarkable gift in a position to pay educational dividends."

The Everett-Williams Memorial Scholarship Fund is open to receive gifts from individuals and organizations by sending a check with the fund noted in the memo line to the University of Mississippi Foundation, 406 University Avenue, Oxford, MS 38655; or by visiting www.umfoundation.com/makeagift.  For more information call 662-915-5945.