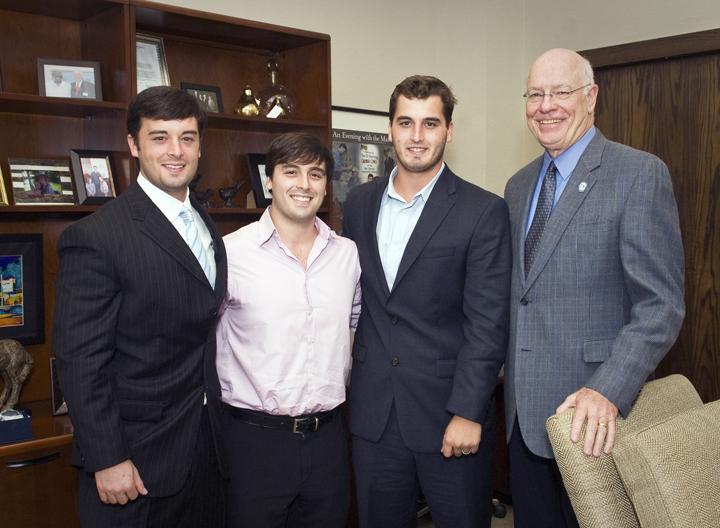 Lynch's training at UMMC in the 1950s – as part of the first class to spend all four years at the newly built campus – launched a nearly four-decade career in radiology.

After spending much of his professional career in private practice, Lynch returned to the UMMC faculty in 2004 to teach Neuro-CT before retiring in 2011. He said his second stint at the Medical Center was just as educational and rewarding as the first, and that he "learned as much from the students as they did from me."

In gratitude for his time at UMMC, Lynch and his wife, Gwen, have established a scholarship in memory of his late son: The William F. Lynch III Memorial Scholarship.

"I felt like I wanted to repay the university for all of the inspiration and training, and the love of teaching, I was afforded," Lynch said.

A confluence of factors sparked Lynch's interest in creating a scholarship for medical students. His retirement in 2011 prompted him to begin thinking about his legacy and how he could best make an impact. At the same time, Lynch was thinking about how he could make a fitting memorial tribute to his son, William F. Lynch III, after his untimely death at age 42.

What clinched the idea was an article he read in a University of Mississippi Foundation newsletter detailing gifts made by members of his graduating class: R. Faser Triplett and Paul Moore. After reading about their gifts, it became clear to Lynch that he wanted to do something lasting, something that would benefit his grandchildren and great-grandchildren's generation. So, with the help of the UM Foundation, Lynch created a scholarship endowment funded by a $100,000 charitable trust.

Lynch's grandchildren – William F. Lynch IV, Ryan Walker Lynch and Grady Wilson Lynch – were part of the planning and presentation of the scholarship to the university.

"We wanted to create this scholarship as a memorial to the life of my son Bill and as a legacy for his three boys," Lynch said.

The scholarship will be awarded to a deserving medical student, with preference given to students who plan to stay in Mississippi and practice radiology.

For Dr. Tim McCowan, chairman of the Department of Radiology, this gift will be a great way to attract promising students to choose radiology as a specialty.

With medical imaging becoming an increasingly critical part of medical practice, radiologists will be in high demand, McCowan said.

"This scholarship will ensure that the best and brightest students consider radiology as a specialty," McCowan said. "Well-trained radiologists are crucial to meeting the future healthcare needs of the citizens of this state."

Dr. Lynch's other goal is to ensure that promising physicians stay in Mississippi to practice.

"With the groundbreaking on the new School of Medicine, the purpose being to train more students, we want to make sure those students continue to study and train and practice here in the state of Mississippi," Lynch said.

This is certainly a goal that Dr. James E. Keeton, vice chancellor for health affairs and dean of the School of Medicine, can get behind. With the nation's lowest rate of physicians per capita, UMMC has committed to expanding its medical school class size in order to provide more doctors.

"We are grateful to Dr. Lynch and his family for seeing this need and helping us train the next generation of physicians," Keeton said.

Lynch believes other medical alumni will become part of that movement as well. They just need to know the opportunity is there, he said.

"I hope someone reads about this and is inspired themselves to make a gift to the university," Lynch said.