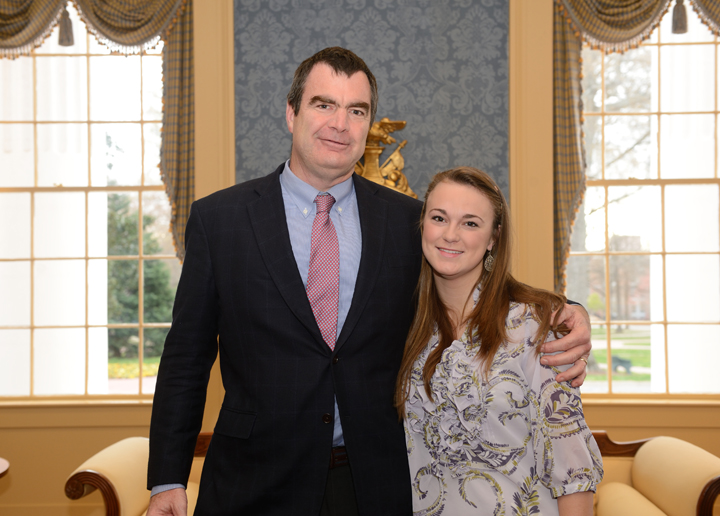 Andrew Carter of Charlottesville, Va., a member of the Ole Miss Parents Council, with his daughter, Hattie, a UM sophomore

August 19, 2011, a freshman move-in day at the University of Mississippi similar to most: 90 degree heat, a heavy trunk and mini-fridge to be lugged by little brother, and one elevator out of commission. Campus security is ushering SUVs to far-off parking spaces as a hike up the hill between Crosby Hall and the Student Union is required, only to wait in line for heavy textbooks and cool drinks. Andrew and Liz Carter of Charlottesville, Va., anxiously help their daughter, Hattie, settle into life at Ole Miss.

The Carters are not frustrated parents, but rather, grateful ones recognizing the generosity and dedication of UM staff. "Oxford to Charlottesville is a 14-hour drive through most of Tennessee – a long way to drop off your baby girl in the newfound freedom of a college campus," said Liz Carter. "But our move-in experience was similar to my other interactions thus far with Ole Miss; everyone was helpful and couldn't have been nicer. It was an exciting time full of giggling, jittery girls."

Fast forward to spring 2013. With a gift of $32,000, the Carters have established the Hattie Bo Scholarship through the Ole Miss Parents Council. The Hattie Bo Scholarship is for a full-time, degree-seeking student who is the child of a university staff/faculty member that demonstrates financial need. Named in honor of their daughter, Harriet Bocock Carter, the scholarship is intended as a thank you to the UM staff.

"When we would talk to Hattie, she talked about friends and classes, but she also told us about a woman who worked in her dorm that had been so kind to her," said Andrew Carter. "We're glad our daughter is a considerate, thoughtful young lady, and we appreciate that people here at Ole Miss are looking out for Hattie and checking in on her. Hattie is constantly looking outward and thinking of others, not just herself. This seems true of lots of people on campus."

After a particularly challenging week, Hattie walked back to her residence hall feeling a bit down and far away from home. "I had a great freshman year, but sometimes you can feel like you're just part of a crowd," she said. Brenda Strong, a custodian on Crosby's sixth floor, was working when Hattie got upstairs. "She said, 'Hi Hattie,' and it struck me that she knew my name. It meant a lot in that moment. Ms. Brenda was there for a lot of girls and was very motherly. She was a big part of 'Crosby 6.'"

"Since the day we received Hattie's UM acceptance letter, we felt Ole Miss accepted our entire family," said Liz Carter. "If we have a question about something, we make a call and get to speak with someone. When Hattie had questions about the study abroad program, we went in the office and the director helped us. The first year of school, I called the infirmary about my daughter's health. A staff member was more than happy to talk with me. I don't think we, as parents, would have that accessibility at another school. The road to Oxford may be long, but I haven't found it to be far."

The Carters are members of the Traditions Society of the Parents Council Leadership Circle. The Circle is composed of parents who desire to help the university provide extraordinary educational opportunities for UM students.

"The Carters truly care about the well-being of this university, its students, staff, faculty and alumni even though they are not alums themselves," said Elizabeth Milhous, development director of the Parents Council. "When we launched the Parents Council, they were one of the first families to serve. They have provided support and guidance to our Division of Student Affairs and have been UM advocates. We are privileged to have the Carters involved who understand the significance of both annual support and major gifts."

Recently, Provost Morris Stocks thanked the Carters in person while they were on campus. "We're in the business of transforming lives here at Ole Miss, and this scholarship fund will certainly transform someone's life."

Lionel Maten, student housing director, became choked up when he spoke with Brenda Strong later that morning. "When I told her that she was noted among the staff efforts that inspired this gift, we were both moved. It motivated her to know that her extra efforts didn't go unnoticed. I think one of our hallmarks is that we are a family here at Ole Miss. Having a scholarship of this nature strengthens that family, and it is such a great gesture."

Maten often emphasizes to staff the importance of positive daily interactions among students, staff and faculty. He also appreciates the role of the Parents Council. "Very similar to the African proverb 'it takes a village to raise a child,' I believe it takes everyone on campus to get a student through to graduation – and a strong relationship with parents helps us to be more successful in that process."

Leslie Banahan, assistant vice chancellor for student affairs, concurred. "From groundskeepers to custodians and maintenance workers to office assistants, all help our students feel valued. It's not unusual for a student to share with me the impact a staff member has had on her day. I am so proud of our staff and all they do to help our students be successful.

"I was so impressed with Hattie and her willingness to look beyond herself and see others around her, especially those who worked to make her residence hall a home for all the students who lived there. Hattie does not take the work of others for granted – instead, she expressed her appreciation and inspired her parents to help a staff member's son or daughter go to college.  I look forward to seeing what Hattie accomplishes in the next few years. She is an amazing young woman."

Twenty-four families from eight states founded the Ole Miss Parents Council in 2012. The organization's mission is to encourage communication between the university and parents in order to improve the college experience. In addition to the Hattie Bo Scholarship, the Parents Council's work and support has already enhanced five university areas through gifts totaling $25,000. To learn more about the Ole Miss Parents Council or to receive a brochure, contact Elizabeth Milhous, director of parent development, at milhous@olemiss.edu or 662-915-3181.