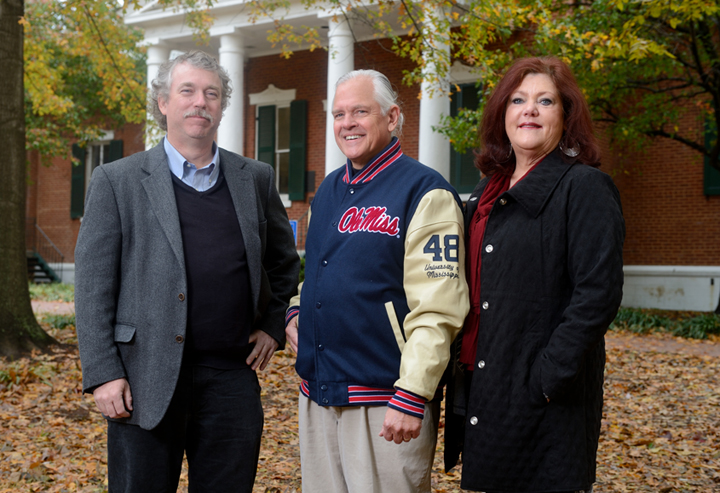 Ron and Becky Feder, at right, with Ted Ownby of UM's Center for the Study of Southern Culture

As native Mississippians, Ron and Becky Feder grew up steeped in the folkways of the American South. But it took an extended stay in the faraway Philippines to help them truly appreciate the extraordinary-and decidedly unique-culture of their homeland.

The Feders have been giving their money and time to the study and preservation of Southern culture ever since. Most recently, the couple provided a gift of $100,000 to the University of Mississippi's Center for the Study of Southern Culture (CSSC) to support the Oxford Conference for the Book (OCB). It's one of many such gifts to UM over the years from the Feders, who also previously gave $100,000 to the CSSC's Music of the South Endowment.

"A gift like this is pretty extraordinary, both because it is such a big help to the Oxford Conference for the Book and also because it makes it much easier to plan for the future of the Conference," said CSSC director Ted Ownby. "The funds will pay a lot of the travel expenses of the speakers and allow the conference to attract the diverse group of people-writers and publishers and agents and others-that make the OCB such a unique event."

Becca Walton, the OCB's director and associate director for projects at the CSSC, agreed. "We so appreciate the Feders' gift, as it demonstrates an enduring interest in the power of the written word to bring diverse people together for meaningful discussion. With a firm foundation made possible through gifts like the Feders', the conference is growing and will continue to reach new audiences eager for a discussion of the common experience of reading."

Born and raised in Vicksburg, Ron Feder graduated from Ole Miss in 1973 with a bachelor's degree in political science. There, he met Becky, his future wife appealed to her to move cross-country when he joined the U.S. Air Force in 1974. "Since I couldn't live without her, I suggested she finish her degree elsewhere and come with me to California, where I was stationed," he recalled.

The two married in 1975, lived for a while in the Washington, D.C. area, then returned to Oxford when Feder enrolled in the UM School of Law.

"It was during law school that I learned that the CSSC had been formally established a year earlier," Feder said. "Becky and I did not really pay attention at that time because, well, we figured we knew enough about Southern culture because we had been living it most of our lives. It was not until we journeyed 9,000 miles to the Philippines, on the far edge of the Western Pacific, that we realized the peculiar wonder of Southern culture."

Having rejoined the Air Force as a judge advocate upon graduating from law school in 1981, Feder found himself stationed, along with Becky and their children, at Clark Air Base in the Philippines during the tumultuous last years of President Ferdinand Marcos' administration. The island nation, he noted, "was not exactly the tropical paradise that we had envisioned."

Fortunately, the Feders got to enjoy the blues-tinged sounds of home once a week when the Armed Forces Broadcast Network started carrying the "Highway 61" radio program, created by the CSSC and its former director Bill Ferris. "That's when the Center became important to Becky and me and literally forced us to choose between a career that could take us all over the world or a return to sweet home Mississippi," said Feder, who ultimately devoted 34 years to active and reserve Air Force service, including a four-month tour of duty in Baghdad in 2006.

They chose Mississippi, of course, and Feder soon settled into a successful private law practice in Ocean Springs. After buying a second home in Oxford in 2001, the couple reached out to CSSC associate director Ann Abadie and offered assistance where it was needed most.

"She told me about the Conference for the Book, and we made our initial ten-year commitment to that program in 2002," Feder said.

"We recently renewed for another ten years because we appreciate the great work the conference has done over the years, celebrating the lives and works of great southern writers like Eudora Welty, Walker Percy, Flannery O'Connor, Larry Brown and Barry Hannah."

An avid reader of both fiction and nonfiction, Feder says he doesn't have any one favorite writer, but he and his wife are both fans of UM's fiction writing professor and author Tom Franklin

As chair of the CSSC's advisory board, Feder urges his fellow Southerners to support its programs, such as Music of the South and the Southern Foodways Alliance. Too many denizens of the South "don't appreciate southern culture as something unique or special," he said. "They enjoy life down here and just don't ponder the hows or the whys."

Feder considers the CSSC as one of UM's flagship programs and one that truly distinguishes it from other colleges and universities in this country. After all, as the Feders began to realize during their time in the Philippines, the American South, although it continues to endure, may not always prevail.

"We could see that it was slowly homogenizing into the larger, blander American culture," he recalls. "How wonderful, we thought, that the CSSC is documenting and studying the hows and whys of the South's cultural landscape before it all disappears into the larger American melting pot."

The Center for the Study of Southern Culture is open to receive gifts from individuals and organizations by sending a check to the University of Mississippi Foundation, 406 University Avenue, Oxford, MS 38655, or contacting Nikki Neely at 662-915-6678 or nlneely@olemiss.edu, or by visiting online www.umfoundation.com/makeagift.