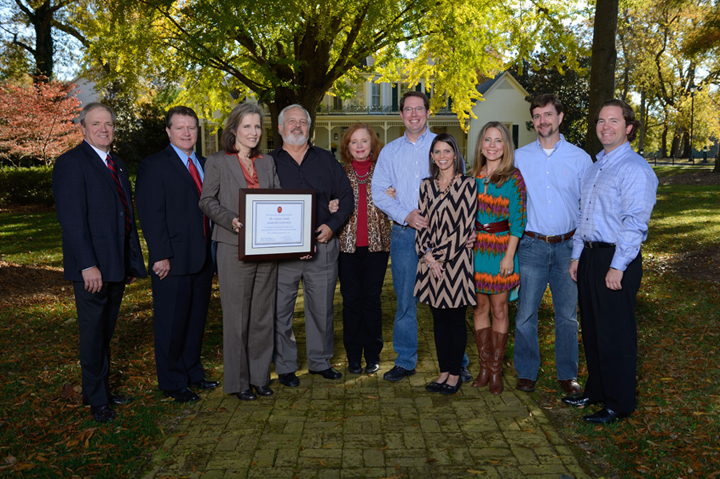 Like most parents, Bob and Rita Vasilyev are rarely surprised by the actions of their three adult children.

So the Oxford couple was not stunned when the trio committed $130,000 to the University of Mississippi's Department of Nutrition and Hospitality Management, establishing the department's first endowment in their family's name.

Instead, Bob Vasilyev, president of Vasco Properties Inc., nodded in agreement as Scott Vasilyev, their second-oldest and a 2001 graduate, discussed why he supports academics at Ole Miss. Rita Vasilyev, also a UM graduate and co-publisher of The Oxford Eagle newspaper, smiled encouragingly when Renee Sholtis, a 1997 graduate and the oldest sibling, joined the conversation. And the couple shared a laugh when Joey Vasilyev, a 2003 graduate, the jokester of the family, discussed the beginnings of the family's food service business.

"I won't say I'm not proud of them, because I am," Rita Vasilyev said. "And, I won't say I'm surprised they thought to establish this endowment, because I'm not. They've always been very generous children, especially to the Lafayette-Oxford-University community."

Bob Vasilyev agreed and added, "They saw a need and acted on their desire to help future students in the hospitality management field. Both Scott and Joey are graduates of the program. I am so proud of their generosity and dedication to the University of Mississippi."

The Vasilyev siblings created the Vasilyev Family Scholarship Endowment with a $25,000 gift and an additional $5,000 to award the scholarship right away. The family also has committed to adding $10,000 – $5,000 for the endowment and $5,000 for immediate awards – every year for up to 10 years.

The scholarship is intended for junior and senior nutrition and hospitality management majors, with preference given to students from Lafayette, Lowndes, Oktibbeha, Panola and Tate counties, where the family operates its six Taco Bell restaurants.

Although the scholarship endowment is a first for the Department of Nutrition and Hospitality Management, the gift is not a first for the family. In fact, the Vasilyevs are widely respected for their philanthropic endeavors, including being lifelong supporters of Ole Miss athletics.

"I would love to say they got their generous hearts from me, but they got that from their mom, who got it from her mom and dad," Bob Vasilyev said

Rita Vasilyev is the daughter of the late J.C. and Nina Goolsby, co-owners of The Oxford Eagle. Nina Goolsby was editor of 6,000-circulation daily from 1961 to 2006.

Joey Vasilyev, director of marketing for Vasco Properties Inc., credits the entire family for making them who they are today.

"Our grandparents were longtime supporters of this community and they taught our mom early on how important it is to give back," he said. "But our dad is equally culpable. He's a strong leader who believes in investing for immediate impact."

From 1968 to 1972, Bob Vasilyev served in the U.S. Air Force. He later worked as assistant publisher at The Oxford Eagle for 15 years before leaving to found Vasco Properties in 1987.

"Investing in the education of a student has an immediate impact on that individual, but also it's a long-term investment," said Scott Vasilyev, director of human resources at Vasco Properties. "Some day that student will be in the position to give back to Ole Miss and the cycle continues."

Scott Vasilyev and his wife, Candace, a 2003 pharmacy graduate, live in Oxford with their children, Vivian and Alexander.

Velmer Burton, dean of the School of Applied, said the Vasilyev Family Scholarship Endowment is "indeed a wise investment with immediate impact."

"This type of support directly impacts the lives of upperclassmen that have proven to be serious about the field of nutrition and hospitality management," Burton said. "The generosity of the Vasilyev siblings will make a lifetime difference in the lives of these students and improve the quality of life for all."

"Hospitality management is a consumer-driven field, and Ole Miss has a great group of dedicated, student-oriented faculty preparing students to become professionals in this exciting field," Scott Vasilyev said.

"The faculty is top-notch and I left with more than just knowledge," he said. "I left with real-world experience in food preparation, service management, marketing and much more."

Sholtis, an English and journalism graduate, wholly supports her brothers' decision to establish the endowment.

"Ole Miss obviously prepared Joey and Scott for the challenges of the food service field," she said. "That's the reason they wanted to give back to the program. They received a great education and excellent experience, and they simply want to give back to students in the department that nurtured and prepared them for success."

Sholtis lives in Fairhope, Ala., with her husband, Jonny, a 1997 UM law graduate, and their two children, Sophie and Oliver.

Gifts like these allow the department to continue providing outstanding opportunities for students, said Kathy Knight, interim chair of nutrition and hospitality management.

"I was flattered and so grateful when I heard that two of our graduates were establishing an endowment," Knight said. "It's also exciting that the scholarship is for juniors and seniors because there are very few scholarships for this group of serious students."

For the two proud parents, the newly established endowment is a legacy that can live on for many years into the future.

"It's a way to always tie me to my university and my hometown, and that's worth it for me," Rita Vasilyev said.

Individuals and organizations interested in contributing to the Vasilyev Endowment can send checks to the University of Mississippi Foundation, 406 University Avenue, Oxford, MS 38655 with the endowment noted in the memo line. Gifts also can be made by contacting Gloria Kellum, development consultant to the School of Applied Sciences, at 662-915-1081 or gkellum@olemiss.edu, or by visiting http://www.umfoundation.com/makeagift.