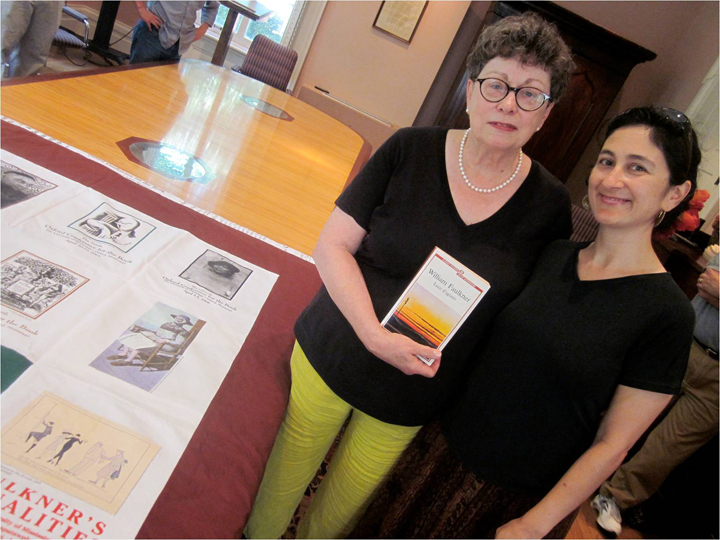 A newly established endowment to secure the future of the Oxford Conference for the Book (OCB) – an annual event bringing together authors, publishers, editors, agents, scholars, book retailers and readers – and honor its founder has grown to more than $130,000.

Past and present advisory committee members of the University of Mississippi Center for the Study of Southern Culture (CSSC) initiated the fund a year ago to mark the retirement of Ann Abadie, the center's associate director and the major force behind the Book Conference for almost two decades. The lead gift of $100,000 for the endowment was contributed by longtime CSSC benefactors Madeleine McMullan of Lake Forrest, Ill., and the late James McMullan, who died earlier this spring.

"All through the years my husband and I had faith in the stability and the dependability of Ann Abadie. The gift to secure the future of the book conference is for Ann," said Madeleine McMullan, who attended many conferences in its 19-year history.

Lynn Crosby Gammill of Hattiesburg, an advisory committee member who contributed to the fund, praised Abadie for her many contributions.

"When I first met Ann Abadie in the early 1970s, she, Bill Ferris and others were busy setting up the Center for the Study of Southern Culture, which has turned out to be a national treasure. Among Ann's many duties at the center have been overseeing the Oxford Conference for the Book, editing the Southern Register, coordinating the Faulkner Conference, establishing the Blues Archive, and continuing her founding work with the Mississippi Institute of Arts and Letters. Ann's total devotion to spreading the word of the continued importance of the book during a computer age should be duly recognized with this endowment to assure the continuance of this important part of the university's programs and legacy."

Over the years, the conference has been the site for intriguing gatherings, bringing together well-known authors and rising stars in the publishing world with others interested in literature and literacy. The university and Square Books of Oxford partner to sponsor the conference, which is free to the public, and a number of participants have contributed to the new endowment. The annual income from the endowment will pay a percentage of the annual conference's expenses beginning in 2013.

Ted Ownby, CSSC director, said he encourages others to consider a gift to the endowment.

"This endowment is a terrific way to assure the future of the Oxford Conference for the Book. It will enable the center and its partners to focus on planning the speakers, workshops and other events, assuring that this extraordinary conference is strengthened, without having to devote so much energy to fundraising," he said.

"Naming the endowment for Ann Abadie will allow us a moment every year to recognize and celebrate the work she has done and continues to do at the center. She has been the primary organizer of the Book Conference since its inception, so it is appropriate to honor her outstanding work through this support for the conference."

Across its history, the OCB has brought an array of authors to the conference, including William Styron, Richard Ford, Elizabeth Spencer, Pat Conroy, Ellen Douglas, John Grisham, Larry Brown, Natasha Trethewey, George Plimpton, Willie Morris, Jon Meacham, Endesha Ida Mae Holland, Mildred D. Taylor, Roy Blount Jr. and Wendell Berry. The conference has hosted discussions with countless authors, always striving to give the same time, attention and respect to the famous and the not-yet famous. The conference always includes two sessions for local elementary and high school students and a literary tour through a part of Mississippi. Participants have come from across the United States and beyond.

"I have loved books since I was a child, and my love of William Faulkner's books brought me to Oxford for graduate school in 1960 and later, in 1974, resulted in my joining Vasser Bishop, Evans and Betty Harrington, Gerald Walton, Charles Noyes and James Webb as a founder of the Faulkner and Yoknapatawpha Conference, now the world's oldest annual event devoted to the study of a single author," said Abadie.

"With the parallel development of the Center for the Study of Southern Culture and at the suggestion of Richard Howorth from Square Books, and with his collaboration, the Oxford Conference for the Book was launched in 1993. Through the generous assistance of Jim and Madeleine McMullan, Lynn Crosby Gammill, Patricia Land Stevens and numerous other friends, the continuation of the conference will be assured. For this, I am extraordinarily pleased and profoundly grateful."

In recent years, the majority of funding for the OCB has come from the generosity of the R&B Feder Charitable Foundation for the Beaux Arts of Ocean Springs and grants from the National Endowment for the Arts, Mississippi Arts Commission, Mississippi Humanities Council, John and Renee Grisham Visiting Writers Fund, Oxford Tourism Council, Yoknapatawpha Arts Council and many other groups. Also providing support to OCB has been the Junior Auxiliary of Oxford, Lafayette County-Oxford Public Library, Lafayette County Literacy Council, LOFT: Lafayette/Oxford Foundation for Tomorrow, Mississippi Hills Heritage Area Alliance and Southern Literary Trail.

Individuals and organizations can make gifts to support the Oxford Conference for the Book Endowment by mailing a check with the fund noted to the University of Mississippi Foundation, 406 University Avenue, Oxford, MS 38655; visiting www.umfoundation.com/makeagift; or contacting Nikki Neely, development officer for the Center for the Study of Southern Culture at 662-915-6678 or nlneely@olemiss.edu.