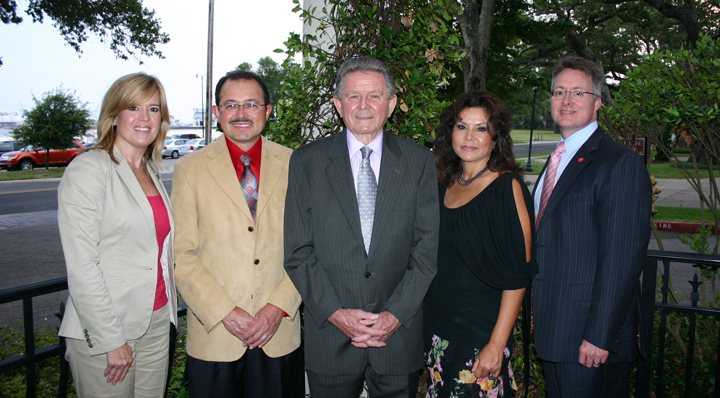 As children growing up in Pascagoula, Miss., Kenny Clark and his sister Rhonda Clark experienced first-hand the golden age of the small-town drugstore – those idyllic days of cherry Cokes served from soda fountains, milkshakes in tall, curved glasses and a kindly, wise pharmacist who knew every customer by name.

For Rhonda and Kenny, that pharmacist was their father, McKinley Clark, a 1960 graduate of the University of Mississippi School of Pharmacy. And, when they grew up, they wanted to be just like him.

Today, both siblings are pharmacists and Ole Miss alumni themselves, still living and plying their trade in their hometown. The profession has changed dramatically over the years, but their admiration for their dad has only grown. So when it came time to get him a Christmas present last year, they chose one that would honor him for decades to come: a $50,000 gift creating two endowments at Ole Miss to benefit School of Pharmacy professors and students.

The Clark siblings worked after school every day in the pharmacy founded by their dad and their late mother in 1964. "Dad set the standard," Kenny Clark recalled. "That drugstore used to be open 365 days a year, from 7 a.m. to 11 p.m. I worked a lot of those 11 o'clock shifts myself at the cash register. When you grow up in that business, you tend to want to go into it yourself."

Kenny Clark graduated from UM's pharmacy school in 1980, and his sister earned her degree there in 1986. As the family business expanded, the three of them owned, at one point, seven stores incorporated under the name Sav-Rex.

For McKinley Clark, the health of his customers took priority over profits, Rhonda Clark said. "He's one of the most honest people I know, a man with high moral standards. I've seen him give medicines to families when they've been laid off from their jobs and can't afford to pay. He'd just let them pay for it later, and if they didn't come back, he wouldn't go after them. It was just forgotten."

The elder Clark has fond memories of Ole Miss and his professors. "I owe my success to the School of Pharmacy," he said. "It's done so much for me and my children. Ole Miss has been nothing but supportive of us, and that's why we've all been so successful."

The siblings felt inspired by their UM professors to create the faculty support endowment. "With the current economic situation, universities have to rely more on these types of gifts rather than state and federal money," Kenny Clark said. "So we felt this was something we needed to do. There comes a point when you need to start giving back to those who have helped you in your own livelihood."

Rhonda Clark agreed. "We wanted to find a way to give back to the pharmacy profession in our father's name," she said. "Everything we've got, everything we've achieved is because of him. And it means a lot to him to give something that's going to help others in the long run."

David D. Allen, dean of pharmacy, said the endowments will reap enormous benefits for future generations. "This country's premiere pharmacy schools not only have a stellar and diverse cadre of talented students but also a stellar and diverse cadre of talented faculty," he said. "Our school is fortunate to have both, and it is because of their knowledge, energy, enthusiasm and passion that we have a nationally ranked program.

"If we are to remain a top-notch program, we must be able to continue to attract the best and the brightest, but competition for outstanding students and faculty is growing ever stiffer," Allen added. "Words cannot express my gratitude to the McKinley Clark family members for supporting both our students and faculty. Their generosity to our School of Pharmacy will help ensure that talented students continue to become outstanding pharmacy practitioners and that talented teaching, research and patient care faculty continue to innovate and contribute in amazing ways to pharmacy education, their disciplines and patient care."

Raina McClure, director of development for pharmacy, echoed Allen's remarks. "It's inspiring to listen to the many stories about how McKinley Clark has given back to the community in so many ways," she said. "To be able to help them carry on their family legacy for many years to come is truly an honor."

McKinley Clark's daughter from his second marriage, Amanda Erin Clark, also earned her degree in pharmacy administration from UM as did her mother, Nanette Clark, and Dempsey Levi, the Clark family's business partner in the Sav-Rex stores.

Now semi-retired, McKinley Clark still dispenses meds and sage advice three days a week at a Fred's Pharmacy in Pascagoula. He said the endowments made the perfect gift.

"It was a pleasant surprise," he said. "Nothing they could have given me would have been more enjoyable or satisfying. I don't have any material needs, so I'd rather pass on some of our success to future generations. This was a real pleasure and an honor."

The McKinley R. Clark Faculty Support Endowment and the McKinley R. Clark Scholarship Endowment are open to receive gifts from individuals and organizations by sending a check with the funds notes to the University of Mississippi Foundation, 406 University Avenue, Oxford, MS 38655; contacting Raina McClure at (662) 915-6967 or by visiting www.umfoundation.com/makeagift.