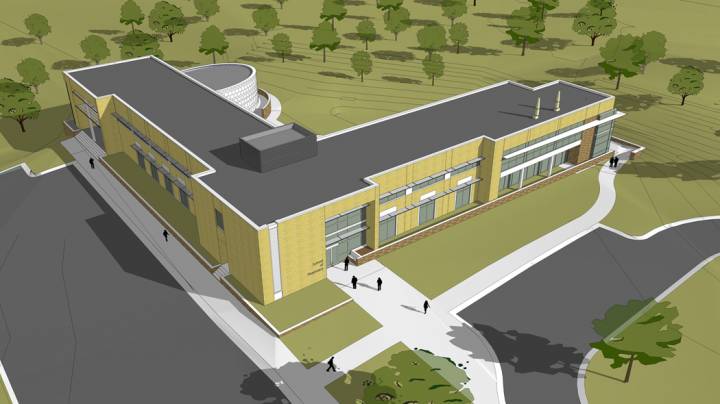 JACKSON, Miss. – For 38 years, pharmacy practice students and faculty have been learning and working at the University of Mississippi Medical Center in Jackson without a building of their own. That will change this fall, when the two-story structure going up on University Drive is complete.

The 29,500-square-foot “L”-shaped building includes 17 small classrooms, a student lounge, offices for faculty, and laboratory and clinical research space. An attached 160-seat auditorium will be equipped for lectures, seminars and sharing live video with the Oxford campus.

“This state-of-the-art educational facility for students will place them in the heart of UMMC’s academic corridor daily and provide more interaction with students in other health-related professions,” said Leigh Ann Ross, associate dean for clinical affairs and chair of pharmacy practice.

Fourth-year pharmacy student Katie Sims of Athens, Ala., predicts her classmates will enjoy the new building because it will foster more interaction with one another, as well as faculty, who are spread across the campus.

“While attending pharmacy school on the Oxford campus, I practically lived in Faser Hall,” Sims said. “I’d run into faculty in the hall, and if I had questions about something from a class, I could just ask them.”

The School of Pharmacy’s professional degree program is split between Oxford and Jackson. In Oxford, most classes take place in Faser. Without a building such as Faser Hall in Jackson, the transition was “really strange,” Sims said.

“I miss hanging out with other students and seeing people in the halls,” she said. “The new building is going to be a huge improvement, and I’m very jealous of the next class.”

As president of her class, Sims organizes study sessions for her classmates, but the task is difficult. With its conference rooms, small group rooms and other areas in which students can congregate, the new building will make the job easier, she said.

“I go to meetings with students in different schools, and they have a sense of community that we don’t have right now,” she said. “Students in other schools are excited for us.”

Despite being scattered over two miles, the pharmacy practice faculty has developed strong clinical and translational research collaborations with Medical Center colleagues, which complement the pharmacy school’s research in Oxford. Faculty members also are involved in patient care and, in partnership with the Medical Center, established a pharmacist-run clinic that received a Best Practice Award from the American Society of Health-System Pharmacists for innovations in a model pharmacy practice program.

“Pharmacists are an integral part of the team that delivers health care in this state,” said Dr. James Keeton, UMMC vice chancellor for health affairs. “I speak with Dr. [Barbara] Wells (pharmacy school dean) regularly, and we are both excited about the building project and look forward to enhanced collaboration among the health professional schools at the Medical Center.”

Faculty also implemented a problem-based learning curriculum that has been replicated by other schools, and pharmacy students’ pass rates on the national licensure exam have exceeded 98 percent over the past seven years. The rate was 100 percent for four of those seven years.

“Faculty will appreciate being together and having a visible home,” Ross said. “The convenience will foster relationships and more collaboration among faculty, and I believe having a designated place will increase our visibility and heighten awareness of our nationally recognized programs.”

The push for the new building came after pharmacy’s accrediting body, the Accreditation Council for Pharmacy Education, encouraged the school to narrow the gap between academic and research facilities in Jackson and those in Oxford. The ACPE’s concerns mirrored those of pharmacy administrators, who realized students and faculty were becoming increasingly isolated from the rest of the campus.

“This new building, along with the $31.7 million expansion of the Thad Cochran Research Center in Oxford, will not only improve learning and student and faculty morale but also provide the foundation upon which to continue building our school’s legacy of excellence on two university campuses,” Dean Wells said. “It will also provide abundant opportunities for interaction between students and faculty in all the health professions, a requirement of new accreditation standards.”

Doctor of Pharmacy (Pharm.D.) students split their seven-year degree program between Oxford and Jackson. In Oxford, students spend three years in pre-pharmacy and two in the professional pharmacy program. Then they head to UMMC for a year of active learning and early practice experiences, followed by a year of advanced practice experiences. Most of their courses moved to the Jackson Medical Mall in the late 1990s, when the school began offering the Pharm.D. degree, which requires students to spend more time in a variety of clinical settings.

“There are many wonderful patient-care activities at the mall,” Ross said. “Our students participate in these activities during their clinical practice experiences, but for their classroom-based educational activities, it is vitally important that they become more a part of the UMMC student body.”

With the pharmacy school’s plans for increasing enrollment, as many as 115 students will be learning in Jackson in their third professional year. A similar number will be enrolled for their fourth professional year in Jackson and at other clinical sites across Mississippi and in Tennessee. The new $10 million building will amply accommodate these numbers.

The school has secured some federal funding for construction, as well as a commitment from the university, but more funds are needed. They are being raised through Promises to Keep, the pharmacy school’s first capital campaign.

“We’re asking donors to show their support by naming a designated space within the building. Opportunities range from $10,000 to place a donor’s name on a faculty office to $2.5 million to name the building after a donor,” said development officer Sarah Hollis. “Naming opportunities are an ideal way to publicly show support or to honor a loved one or beloved faculty member.”

Alumni and corporate partners alike have committed to a variety of naming designations, but many opportunities are still available. For more information about them, contact Hollis at 662-915-1584 or shollis@olemiss.edu.