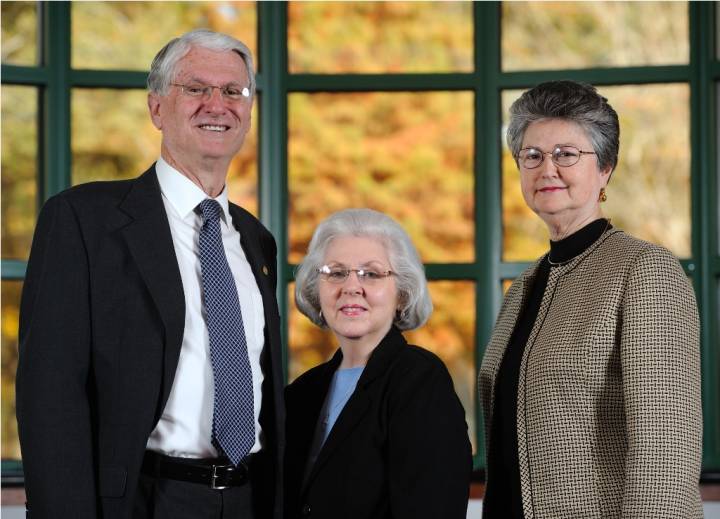 OXFORD, Miss. — A professor who dedicated 38 years to helping University of Mississippi pharmacy students become successful practitioners is building on that legacy by endowing a scholarship fund to assist future students.

“Barbara and Dewy Garner are the real deal,” said pharmacy Dean Barbara Wells. “They are exactly what they appear to be – caring and committed people who lead their lives in a way that makes the world better and inspires others to do the same.”

The Garners “are stellar citizens within the School of Pharmacy family and in the world community,” Wells said. “They have dedicated their lives to helping students and faculty and to advancing the profession of pharmacy and the discipline of pharmacy administration. Through their scholarship endowment, they will help pharmacy students in perpetuity be successful in achieving their professional goals.”

Throughout his career, Dewey Garner has served on national scholarship boards and Ole Miss scholarship committees to select deserving recipients for assistance.

“The idea of establishing a scholarship fund has always been appealing to Barbara and me,” said the professor, who retired in 2009. “I’ve always enjoyed teaching and interacting with our pharmacy students – individuals who want to do well, serve their communities and serve their patients. Pharmacy education is a very invigorating, challenging academic environment, and creating a scholarship to help students pursuing this discipline seemed natural to us.”

Garner, the former chair of pharmacy administration, decided to study pharmacy after his freshman year in college. That is when he recognized his love of science and won awards in physics and chemistry, but he wanted to be involved with people. The fields of pharmacy and higher education provided that interaction. In fact, while he has seen pharmacy school admissions become more stringent, Garner said one thing has not changed: Pharmacy students continue to be interested in people and serving their health care needs.

Establishing the scholarship also stemmed from Garner’s overall pride in the school.

“The School of Pharmacy is extremely strong, and I have such respect for the faculty,” he said. “With the new pharmacy building being constructed in Jackson and the Thad Cochran Research Center being expanded on the Oxford campus, our teaching and research facilities will be the best in the nation. I’ve had the opportunity to witness and be part of tremendous progress.”

Garner has been honored for his dedication to pharmacy education and the profession. Among his many awards, he was presented the 2009 A. Richard Bliss Grand Council Citation of Appreciation by Kappa Psi, the world’s oldest and largest professional pharmacy fraternity. Garner wrote a book in 1993 on the fraternity’s history and has held nearly every national Kappa Psi office, served on almost every national Kappa Psi committee and served as faculty adviser to the Beta Rho Chapter at Ole Miss from 1971 to 2008. The UM School of Pharmacy selected him as “Alumnus of the Year” for 2009-10, and the Mississippi Pharmacists Association inducted him into its Hall of Fame in 2009.

After graduating from UM, Garner was a community pharmacist in New Albany before returning to earn a doctorate. Afterwards, he taught at the University of Houston before joining the UM faculty. Garner’s research interests have focused on community pharmacy education, practice and management, as well as physician prescribing and patient adherence. Garner continues to serve people through a part-time position at Chaney’s Pharmacy in Oxford.

Natives of Mize and Raleigh, respectively, Barbara and Dewey Garner are the parents of two sons, Dewey Jr. and Christopher, both of Memphis. They also have two grandchildren, Molly Garner, a high school senior, and Michael Garner, a freshman at Ole Miss.

The Barbara and Dewey Garner Pharmacy Scholarship Endowment is open to accept gifts from individuals and organizations. To contribute, visit http://www.umfundation.com/makeagift or mail a check with the endowment noted to the University of Mississippi Foundation, 406 University Avenue, Oxford, MS 38655.