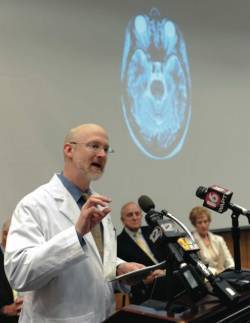 (OXFORD, Miss.) – The late Ken Kirk was a formidable force on the legendary 1959 University of Mississippi national championship football team as a player and co-captain, and he never forgot his experiences or teammates. Through an estate gift of more than $726,000 to the football program, he has secured student-athlete opportunities for other young men.

“The love that Ken Kirk had for Ole Miss football is beyond measure,” said UM Director of Athletics Pete Boone. “The friendships that he made during his years at Ole Miss with Bobby Ray Franklin, Robert Khayat, Warner Alford and so many others were an extremely important part of his life. This gift will ensure that his name will remain with Ole Miss football in perpetuity.”

Kirk lived in Tupelo and enjoyed a career as a real estate developer, property manager and construction company owner before his death in November 2009. His estate gift will provide resources for various facets of the football program.

“Ken Kirk and the 1959 Rebels propelled the Ole Miss football program into the national spotlight and set a new standard of excellence,” said Head Football Coach Houston Nutt. “Now through his estate, he has created a lasting legacy by strengthening a program that will impact the lives of student-athletes for many generations to come. We are both inspired and deeply grateful for his commitment to our program.”

Graduating in 1960 with an undergraduate degree in finance, Kirk came from an Ole Miss family with two other football lettermen, in addition to him. His father – the late Dr. Robert D. Kirk Sr. of Tupelo, who became a well-known physician – was a 1920 graduate and played both football and baseball. Bob Kirk III of Miramar Beach, Fla. – his nephew who earned undergraduate and graduate degrees in business – played defensive end in the mid-1970s.

“Ken’s number one passion in life was Ole Miss and its football program, and he played football with a class group of men,” said Bob Kirk, who also is a longtime donor to Ole Miss. “Ken started giving back to Ole Miss when the Loyalty Foundation (now the UMAA Foundation) was first established. Ole Miss is a place our family has loved and cherished; we could never give back in proportion to the joy it has given us. We have all tried to help grow the programs and want to see them become stronger and stronger.”

UM Chancellor Emeritus Robert Khayat experienced firsthand Kirk’s commitment to the program as a player and alumnus. Kirk and Khayat became teammates and roommates in the summer of 1956 and remained lifelong friends.

“Ken had been selected for the All-American high school football team and was a dominant player,” Khayat said. “One indication of his extraordinary character was evident when he came to Ole Miss expecting to continue playing fullback, only to be told by Coach John Vaught that he was to play center and linebacker. He made the transition seamlessly and was so outstanding that his teammates chose him to be a permanent co-captain of the 1959 team.”

Kirk was a member of the 1959 Ole Miss Rebels football team that went 10-1 and gave up only 21 points all season. After defeating LSU in the Sugar Bowl, the Ole Miss team was declared national champions by three selectors. Kirk was drafted by the Chicago Bears in the ninth round of the 1960 NFL Draft. He also played for the Pittsburgh Steelers and the Los Angeles Rams.

“This gift to Ole Miss is totally consistent with Ken’s generous personality and fulfilled a promise he made early in his business career,” Khayat said. “He was soft-spoken, astute, respected and loved by those who knew him.”

Bob Kirk said that through the years, Ole Miss and its football program were two constant topics of conversation around dinner tables in his family. Many family members were and continue to be season ticket holders, attending the majority of games every year for decades.

Among other family members who attended UM were Kirk’s two brothers, Albert M. Kirk of Tupelo and the late Dr. Robert D. Kirk Jr. of Belden, as well as his two sons, the late Kenneth Henry Kirk Jr. of Charlotte, N.C., and Dixon Kirk. Dixon resides in Jackson with his wife, Brette, and their two children, Kendall and John Sharp Kirk.
(tina hahn)