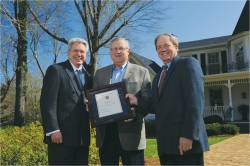 (OXFORD, Miss.) – Bill F. Cossar said that since his retirement from Entergy seven years ago he “makes every event” at his alma mater. Although those events are mostly sporting in nature, Cossar recently made the 40-mile trip from his Charleston ranch to formalize a $125,000 donation to the University of Mississippi.

The gift establishes the Bill Cossar Ole Miss First Scholarship, which will support students from Tallahatchie County. Inaugural scholarship recipients are Susie Tucker of Strider Academy and Jasmine Turner of Charleston High School, both valedictorians of their graduating classes and presidents of their respective National Honor Society chapters. The gift will also benefit other UM initiatives: the Vaught Society, which supports UM’s athletics programs; and the Chancellor’s Trust, which will allow Chancellor Dan Jones to address some of the university’s most pressing needs.

“Bill Cossar is making a tremendous impact on the success of our academic and athletics programs through his generous commitment,” Jones said. “We deeply appreciate this gift and all that he has done over the years to help ensure excellence in the classroom and on the playing field at Ole Miss.”

“I wanted to do something for deserving students from my home,” said Cossar, who graduated from Ole Miss in 1962 with a degree in marketing and sales. “I was able to pay for 90 percent of my school working in the summer, but so many people graduate now with student loans to repay. I wanted to help with that burden and also help someone who maybe wouldn’t go to school otherwise.”

Cossar decided the Ole Miss First Scholarship program was the ideal vehicle to help students. The program was created in 2000 by Cossar’s friend and Ole Miss classmate, Chancellor Emeritus Robert Khayat, to help ensure scholarship support for every deserving student.

Tucker is one of the first two recipients. She will be majoring in English this fall at Ole Miss and said she appreciates the scholarship assistance due to the fact that she hopes to pursue a law degree after her undergraduate degree.

“I am really elated,” said Tucker, who was involved in an array of activities at Strider, including coordinating the school’s blood drive, participating in sports and serving as statistician for the football and baseball teams. Her parents are Jack and Lisa Tucker of Charleston.

Turner – who also served as president of the Student Council and the Science Club, as well as the editor of the yearbook – was elected Miss Charleston High School, homecoming queen and prom queen. The daughter of Mary L. Turner of Tippo, Turner has decided to become a pharmacist after observing the work of a pharmacy in her hometown.

“I’m very excited about this scholarship,” she said. “Ole Miss was my first choice – it’s where I’ve wanted to go all my life. I feel at home there.”

Khayat, who facilitated Cossar’s gift, said that the ongoing commitment of private support is evidence of an abiding love for Ole Miss: “For several generations, the Cossar family has been at the center of life at Ole Miss and that’s certainly true for Bill,” Khayat said. “He told me he wanted to make a significant gift to help our students and athletics teams, and on behalf of everyone at Ole Miss, I’m grateful to him for doing that.”

The Cossar family’s ties to Ole Miss run deep. In addition to Bill Cossar’s father and brothers, his mother, Elizabeth, also attended Ole Miss. The legacy has continued with nieces and nephews as well as with his daughter, Connie Cossar, a 1984 School of Business Administration graduate. (Although Cossar’s son, Harper, who holds a doctorate in communications from Georgia State University, did not attend Ole Miss, Cossar joked that he’s tried to convince his son to seek employment at UM.)

After Bill Cossar graduated from Ole Miss, he spent 41 years with Entergy (formerly Mississippi Power and Light), retiring from his post as vice president for governmental affairs in 2003. In 2008 Gov. Haley Barbour appointed Cossar to his second term on the State Personnel Board, to which Gov. Ronnie Musgrove initially appointed him. Cossar previously served on Mississippi’s Economic Development Board under Govs. Bill Allain and Ray Mabus.