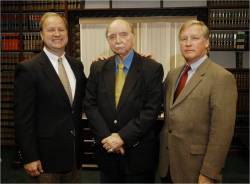 (OXFORD, Miss.) – The late attorney Jesse Boyce Holleman of Gulfport once said that his career had been on the “courtroom floor.” Although his work as a five-term district attorney and later as a criminal defense attorney were legendary, his family remembers him for his willingness to help people in need.

Sons Tim C. and L. Dean Holleman – both attorneys in the firm their father founded, Boyce Holleman & Associates – are paying tribute to his life with a $100,000 commitment to the University of Mississippi School of Law. Part of the gift is designated for the new law school building under construction, where a seating alcove will be named for their father, and another part will support the Boyce Holleman Debate Series, first established in 2003 at the time of his death.

“My dad loved practicing law, and he loved helping people,” Tim Holleman said. “He ingrained in us that one of the privileges of being an attorney is that sometimes you represent people and earn a fee and sometimes you help people who can’t pay just because they need your help. When my dad passed away, numerous people told me stories of how he had helped them for free. He had great empathy for others. ”

“Since Dad passed, my wife, Laurie, and I have commented to each other many times over as we meet Dad’s past service in our daily lives that he was blessed in so many ways with so many talents, but he made sure he gave it back to his fellow man and his profession many times over. We hope this gift will be a reminder to the young men and women seeking to join the legal profession that while it has much to give, there is much to be given back.”

“I am personally grateful for Tim and Dean’s gift to the campaign,” said Samuel M. Davis, dean of the School of Law. “Their father was a personal friend and a giant in the legal profession. This gift will perpetuate his memory and honor his contributions to the profession, as well as honor his love for the School of Law.”

Boyce Holleman earned a Purple Heart for his U.S. Naval service after being shot down in World War II, was elected a Mississippi legislator while an Ole Miss student, and later acted in theater and movies. However, in the legal field he was known as much for his fairness as he was for his persuasive legal arguments and recognized debate skills.

“Through the years, Mississippi has produced many notable, extremely capable lawyers, and our friend Boyce Holleman was among the best of that group – he was a truly great attorney,” said UM Chancellor Emeritus Robert Khayat, who knew Holleman for almost five decades. “As both an attorney with a thriving practice and as a district attorney with significant responsibilities, ‘Jesse Boyce’ – as we often called him – provided strong advocacy, thoughtful case management and excellent representation of his clients.

“Boyce was smart, tough and charming and saw the humor in nearly everything,” Khayat said. “He delivered one-man shows portraying the famous attorney Clarence Darrow and Mark Twain, and Boyce’s presentations were widely acclaimed.”

Tim Holleman said he decided to pursue a legal career himself as a young boy in the late 1960s after attending a trial during which his father’s dramatic closing argument was enhanced by a perfectly timed thunderstorm. “TV was not a big deal in those days, but a trial was. The whole town of Wiggins, Mississippi, was there to listen, and the thunder and lightning rattled the blinds and even caused the lights to go out at one point. It was very exciting.”

The son of William Clifford and Ruth Taylor Holleman, Boyce Holleman grew up in Wiggins and earned both undergraduate and juris doctor degrees from Ole Miss, where he was active on the debate team. As a Naval aviator during the war, he was shot down but survived the bombing run over Saipan. He was hospitalized in California for 14 months recovering from his severe injuries.

Holleman first opened his legal practice in Wiggins in 1950 and later moved his family to Gulfport in 1967. He served in the Mississippi House of Representatives until 1953, when he became district attorney for the Gulf Coast – a post he held for 19 years. After his return to private practice, he served as attorney to the Harrison County Board of Supervisors for 18 years and the Harrison County School District for 15 years. He provided leadership as president of the Mississippi Bar Association for two years and was awarded the association’s Outstanding Achievement in Law Award in 1995. In his acting career he appeared in such movies as “The Ponder Heart,” earned a Screen Actors Guild card and helped establish the Center Stage Theater in Biloxi. He was a member of First Baptist Church of Gulfport.

The attorney maintained a lifelong affection for his alma mater and often shared his legal experiences with young attorneys. He also enjoyed attending Ole Miss athletics events with his family.

Holleman is survived by four sons, two daughters, three stepdaughters, one stepson, and 16 grandchildren. His wife, Annie, passed away in 2006.

The Boyce Holleman Debate Series is open to accept contributions from individuals and organizations. Those wanting to provide support may do so at www.umfoundation.com/makeagift or by mailing checks to the University of Mississippi Foundation, 406 University Avenue, Oxford, MS 38655. Checks should be made payable to the foundation and donors should note “Boyce Holleman Debate Series.”