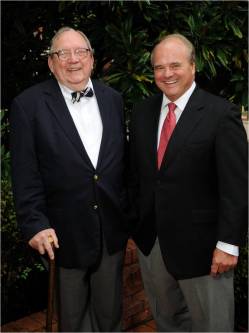 (OXFORD, Miss.) – John W. “Don” Barrett graduated from the University of Mississippi with a great appreciation of history and the ability to write well – both of which have figured prominently into his successful legal career. Now he’s saluting a professor who influenced him with a $100,000 gift.

The Lexington attorney is providing the lead gift for the Harry Owens Civil War Library, which will serve as a key component of the new UM Center for Civil War Research. Owens, a professor emeritus of history, taught from 1964 through 1998.

“When I learned that a Civil War research initiative was underway at the university and part of it would be a library collection honoring Harry Owens, I welcomed the opportunity to give my support,” Barrett said. “I believe the Civil War has shaped our lives in ways few of us fully realize, and for that reason and more, I feel it is appropriate to study this conflict. This is a great initiative for the university and for the state of Mississippi, as well as a fitting way to honor a tremendous professor.

“Dr. Harry Owens helped me develop a love and appreciation of history that I have carried with me for 40 years,” said Barrett – who with his wife, Nancy, has provided longtime support to the couple’s alma mater. “He also taught his students to write well, and the writing skills he taught me have impacted the briefs I have written in my legal career. In turn, I have passed on these Harry Owens techniques to the younger lawyers in my firm.”

Harry Owens expressed his appreciation to his former student and talked about the importance of Civil War study, saying, “The Civil War was a tremendously important period in American history. The Revolutionary War gave us the Declaration of Independence and the Constitution or a prescription of what America could be; the Civil War turned those words into reality, preserved the Union and abolished slavery. I taught classes on the Civil War for years and think those two ideas deserve study and research.

“I am very pleased Don Barrett chose to support the center through this generous library gift in my honor. I taught Don and his three children, and the Barretts are a great Ole Miss family,” he said.

John Neff, director of the Center for Civil War Research and associate professor of history said Barrett’s gift is key to the center’s success.

“In order for this new center to provide a scholarly environment for Civil War research, what we need most of all is a solid research foundation,” he said. “From the very beginning, the Harry P. Owens Civil War Library has been thought of as the heart of the center’s program. We are deeply grateful to Don Barrett; very simply, his extraordinary generosity has made the center possible.”

Glenn Hopkins, dean of liberal arts, added his praise for the alumnus, saying, “Don Barrett has had a long and deep interest in the Civil War, and his gift to the center reflects that interest. We are profoundly grateful for Don’s support and thoughtful advice in helping establish the center.”

The Barrett law firm has offices in Lexington and in Nashville. For more than 40 years, Barrett has maintained an active trial practice and has substantial experience in state and federal courts throughout the nation, primarily in product liability, environmental torts and consumer fraud. Barrett played a national leadership role in the litigation against tobacco companies and was featured in three books. He has been the lead or co-lead counsel in a number of national class-action cases, including several with record-breaking damage settlements.

Among those areas at Ole Miss that have received support from Barrett and his wife, Nancy, are the School of Law, the Ford Center for Performing Arts, the Indoor Practice Facility and other athletics programs. The Barretts are the parents of Richard Barrett, Katherine Barrett Riley, and Charles Barrett. The Ole Miss graduates are all attorneys who practice with their father.

The Owens Civil War Library Fund is open to accept gifts from individuals and organizations. Contributions should be mailed to the University of Mississippi Foundation, 406 University Avenue, Oxford, MS 38655 with a notation for the library fund or made by visiting www.umfoundation.com/makeagift.