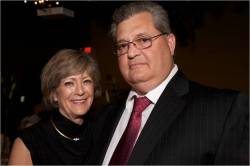 (OXFORD, Miss.) – Johnny and Renee McRight remember their undergraduate and graduate school years at the University of Mississippi as some of the best of their lives. They also recognize the fellowships, grants and other opportunities they were afforded made their graduate degrees and professional careers possible.

To ensure similar opportunities remain available to Ole Miss graduate students, the Greenville couple has created the McRight Biology and Speech Pathology Endowment with a gift of $100,000. The fund will provide assistance for first-year graduate students in the two fields on a rotating basis, with first preference given to Mississippians.

“We want students to be the best students they can be,” said Johnny McRight, who earned undergraduate and graduate degrees in biology. “We know from experience that if your finances are stable, you can focus on your studies. Renee and I felt compelled to do something to provide deserving students the same opportunities we enjoyed. We also want our university to have the resources to be competitive in recruiting students.”

Paul Lago, chair of the UM Department of Biology, said the McRights’ gift addresses a pressing need at a critical time.

“This gift could not have come at a better time, with declining state funding. We welcome this remarkable support, which will give more qualified students the opportunity to experience the excellent research environment here in biology at Ole Miss. We deeply appreciate the generosity of the McRights,” he said.

Johnny McRight benefited from his experiences in the biology department, where he became fascinated with plant physiology. Bailey Ward, now professor emeritus of biology, was an influential figure in McRight’s academic career and encouraged him to complement his biology and chemistry classes with post-graduate studies in pharmacology. After graduation, McRight founded DeltAg Formulations, which has evolved into a formulator, manufacturer and major supplier of soil and plant biostimulants and micronutrients. Because of his love of biology and his alma mater, McRight also has been passionate about the protection of the Ole Miss Grove.

Renee McRight operates a private practice in speech pathology, which she opened after earning undergraduate and graduate degrees from Ole Miss in communicative disorders. “I always knew I wanted to work with children, and this field intrigued me from the beginning,” she said, adding that over the years she has worked with people of all ages.

At Ole Miss she was influenced by Gloria Kellum, vice chancellor emerita of university relations and professor of speech pathology. “She was an excellent teacher and motivator,” Renee McRight said. “When I graduated, I was very prepared for the real world. My generation of speech pathologists worked on licensure law, and Gloria Kellum was the professor who instilled in us the sense that we needed to be active in promoting our profession. She made us all better.”

Kellum responded, saying, “Renee was an exceptional student who developed into an outstanding alumna and tremendous professional. She has dedicated her whole life to helping countless Mississippians of all ages gain or regain communication skills. As we all know, communication is our link to each other, and Renee has made such meaningful contributions in this regard. We are grateful she and her husband are providing opportunities for future speech pathologists.”

The McRights recall fond memories of their time at Ole Miss, which inspired their gift. They were high school sweethearts who married during college. They continue to enjoy friendships they developed in married student housing, where their rent and utilities came to $52.50 a month. Renee McRight was selected to receive one of only two fellowships awarded for graduate work in communicative disorders, and Johnny McRight also received grants for his graduate work in biology and tutored Ole Miss athletes for four years.

“We were as happy at Ole Miss as we were anywhere,” Renee McRight said. “We developed a close-knit family of friends, and we have always loved our university. I think that’s why so many Ole Miss alumni give back – we’ve had great college experiences and then such good experiences in our own careers because of that education.”

Johnny McRight comes from a family with numerous ties to the university, including his parents, Lila Lee Nosser McRight, who was elected Miss Ole Miss in 1946, and his late father, W.O. “Bill” McRight, who played football and graduated in 1949. Two of his uncles were chosen for All-American honors when they played football, and his mother and two of his aunts were varsity cheerleaders.

The McRights’ daughter, Meriwalker Britt, carried on the Ole Miss tradition, earning a bachelor’s degree in biology, before joining DeltAg Formulations. The couple hopes their grandson, John Christian Britt, will continue the family’s legacy at UM. If so, the McRights will be able to see him often since they maintain a second home in Oxford and frequently attend university and athletic events.