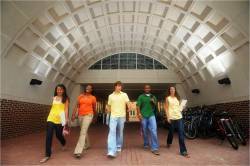 (OXFORD, Miss.) – University of Mississippi students have a new way to reside, study and socialize that’s inspired by a very old theory: Great benefits come from living on campus in a closely knit community.

Around 450 Ole Miss students are part of the inaugural Residential College, with the second college to open in the fall. Based on current members’ reactions and the number of applications for residency, the initiative is a success, said Dan O’Sullivan, the faculty fellow who directs the college.

“We have found that rhythm of life,” O’Sullivan said. “Students have a wealth of opportunities in which to get involved. They are also channeling their interests into founding and organizing groups and activities. They have the opportunity to become leaders in a community of leaders.”

Louis Brandt of Houston, Texas, a longtime supporter of UM, provided an instrumental gift to support the first college because of the potential it held to renew the small university culture that he and his friends enjoyed as college students. Brandt grew up in Oxford, was part of an Ole Miss student body numbering around 3,000, and lived in residence halls and a fraternity house.

“I took for granted the camaraderie I enjoyed as a result of being a part of small groups,” Brandt said. “Now that the university has grown, which caused the city of Oxford to grow, students rarely live on campus after the required first year. This is certainly the norm among public universities, but I feel it is an unfortunate change in culture that causes students to miss one of the most valuable experiences of college, that of developing close academic and social associations with students from all walks of life.

“The Residential College concept has now succeeded beyond anyone’s expectations,” Brandt said. “In my recent tour of the college, I had an opportunity to visit with some of the students and without exception, they expressed their intent to live in this ‘on campus’ facility until graduation. As a result of their experiences, there is a great demand for more space of this type. I am very pleased to have helped in the renewal of this new and exciting culture.”

“This community has and will continue to succeed because it has become just that – a community,” he said. “People here care about meeting and making friends with those around them. I’ve made far more friends and met more people in general than I have my other three years at Ole Miss.”

For years universities in Europe and Great Britian have provided residential colleges to promote learning outside the classroom. With thoughts of enhancing the academic environment and improving retention rates, American colleges and universities have begun to move to this model.

O’Sullivan, associate professor of French, lives in the Residential College with his two children and wife, Patricia, who is teaches religious studies and pharmacy ethics. Twenty-five other professors interact with students through meals and activities. The building features a dining hall, library, study and music practice rooms, computer and fitness centers, theater facilities and more and is located right in the heart of campus, just off the Grove Loop.

The Residential College also provides a safety net, with O’Sullivan and other faculty members monitoring members’ grades and intervening if needed. Among the wealth of programming are German and French tables at meals for those studying languages, study groups, film series, fitness and self-defense classes, monthly family-style dinners, ground training for pilots, chess tournaments, writing mentors, workshops on such subjects as obtaining internships and cooking classes.

“We provide a very good support system to our residents,” O’Sullivan said.

Assistant Professor of German Chris Sapp, who hosts the German Table once a week, became involved because the setup reflects the kind of undergraduate education he enjoyed.

“I attended a small, liberal arts college and had lunch every day with my professors at the German Table and saw them in the evening once a week at German Club,” he said. “Most of us lived on campus all four years, and it really became home. There were always students on campus on the weekends studying, playing Frisbee, et cetera.

“When I came to Ole Miss, I was surprised at how many students live off campus, and my hope is the Residential College will change that and increase a sense of academic and social community,” Sapp said. “I would love to see this enhanced community spirit spread to the entire university.”

Freshman Elizabeth Seratt of Vicksburg enrolled in Ole Miss after graduating from the Mississippi School for Math and Science.

“Coming to such a big school was a bit intimidating,” she said. “The Residential College gave me the opportunity to meet people I wouldn’t have met any other way. My RC friends come from all majors and backgrounds, are involved in Greek Life and Model United Nations, listen to different kinds of music and support different political parties – and they are some of the best friends I’ve ever had.

“I also go to the German Table which has helped my German listening and speaking skills more than any other exercise. It’s such a relaxed environment, where I’m not worried about being graded on pronunciation, grammar or vocabulary,” Seratt said.

Threlkeld said, “When I think about the bond the freshmen here are going to have with each other when they graduate, I get a little jealous. The Residential College will help me after graduation because I now know what kind of community I want to live in – a close-knit community like this one.”