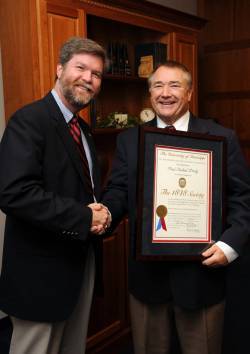 (OXFORD, Miss.) – Michael Brady of Atlanta has assisted 18 University of Mississippi students through an ongoing business scholarship program he created in the late 1990s. Now he’s committed a testamentary gift of $136,000 to ensure his legacy continues.

“At some point in your life, you’ve got to lock yourself into something that’s bigger than you are. In addition to God, of course, that something is my alma mater,” the 1969 business alumnus said. “When you’re ready, you’ll know it. When it’s time to act, you’ll act or you’ll forever wish you would have. It’s one of the things that sets you apart and gives your life meaning.

“Michael Brady has been very involved with students who have received the Brady Scholarship, and his dedication to Ole Miss continues through this planned gift. His generosity and passion for the School of Business Administration and the University of Mississippi are consistent with the commitment of this gift and his faith in our mission. I am grateful for his support and pleased Ole Miss students will benefit from his legacy,” Cyree said.

The idea of the P.M. Brady “Focus” Scholarship in Business is to provide financial assistance to juniors, seniors and graduate students, with first preference given to those students “in the middle,” said Brady. This could include a variety of life or financial challenges, such as being from a family hit by job downsizing, trying to attend college while raising children, transferring from a community college with fewer possibilities of other scholarships and more.

Bryan Jones, a second-year law student at Ole Miss, recalls the impact of receiving one of the scholarships as an undergraduate.

“Further, Mr. Brady was more than a scholarship donor – he was a friend. We’d hang out when he came into town, and he always made sure to provide a good meal for us scholarships recipients. Additionally, if he saw something you needed, he would buy it. He has even offered his spare rooms to my brother, fiancé and myself when we’ve visited Atlanta. Mr. Brady is a caring, friendly and gracious individual. Ole Miss is lucky to have him as a member of its family,” Jones said.

Brady said he is proud of Jones, an economics major who was a member of the Barksdale Honors College and maintained a 4.0 grade-point average, as well as other scholars he has helped.

“So far, all my scholarship recipients have earned their degrees and landed jobs before or within a month of graduation, and three have maintained perfect grade-point averages,” said Brady, who becomes a member of the 1848 Society with his planned gift. “I have developed friendships with most of them and try to stay in touch. There are several things I tell the scholars, including, of course, to maintain good grades and to use me as a resource. They will always have a friend and supporter in me, not just while they’re in college. Another message I share is for them to pass on the blessing I’ve passed on to them from what God has given me. Thus the blessings are kept in flow.”

A native of Columbus, Ohio, Brady and his family moved south to Florida while he was attending military high school in Kentucky. He enrolled in junior college in St. Petersburg and later transferred to Ole Miss.

After his graduation, Brady served one enlistment in the U.S. Air Force during the Vietnam War. He then went on to pursue graduate work in business at The Citadel. He entered the business world through the advertising field in Atlanta and later moved to Charleston, S.C., to open and operate The Phone Room through several retail locations. Brady sold that business in 1982 and moved back to Atlanta, where he established the business Telephone Service Network. He sold it in 2003.

Based on his business experiences, Brady said he would advise college students to spend time developing a plan to achieve their goals.

“If you’re going to get anything done, you’ve got to have a game plan,” the retired business professional said. “Establish your mind set and then develop a plan of action, including contingencies for when things don’t go the way you want them to do so. Those are actually direction changers for you and should be seen as opportunities not problems.”

In recent years, Brady has turned his attention to writing screenplays. He has completed “Blind Singers and Footloose Bards: How the Blues Came Up in Mississippi” and is working on “Humanizing Charley Adams,” both steeped in the history and culture of the Mississippi Delta. In addition to helping students, Brady said he also hopes to bring assistance to this poor region by raising awareness of it through his writing.