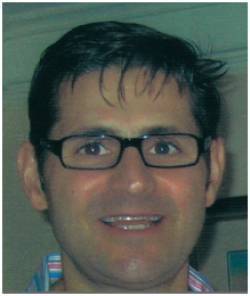 OXFORD, Miss. – From an early age Jerry Rudman let everyone know he would attend the University of Mississippi. When he died in March 2009, his family members knew they would create a scholarship to remember the enthusiastic alumnus and to help others pursue college degrees.

“Jerry always loved Ole Miss,” said his mother, Iris Rudman Smith of Brookhaven. “Having his name on an Ole Miss scholarship is so appropriate. His career took him across the country and around the globe. He always talked about meeting fellow alumni in his travels and how the Ole Miss connection meant instant friendship.”

To pay tribute to his life and his affection for the university, Rudman’s family has endowed the Jerry Rudman Memorial Scholarship fund. In addition to Smith, others contributing to the fund benefiting Brookhaven High School students are his siblings, Judith Rudman of Brookhaven, Suzanne Rudman Brooks of Georgetown, Texas, and J.D. Rudman and Dr. Joel Rudman of Navarre, Fla.

Jerry Rudman’s father, the late Jerry T. Rudman, owned and operated a CPA firm in Brookhaven for 41 years. Smith was the firm’s office manager for 24 years, then went on to serve 19 years as Brookhaven’s city clerk. All five of the Rudman siblings graduated from Brookhaven High School, and Smith said the family’s ties to Brookhaven played a role in their decision to designate the scholarship for BHS students.

“We wanted to give back to people who have been part of our lives, as we remembered Jerry’s life with this scholarship fund,” Smith said. “We believe Jerry would be very proud that the scholarship fund will help Brookhaven High School students who want to earn degrees at Ole Miss. His wish would be for them to have the positive college experience that he did. He loved every part of Ole Miss and made a point of traveling back to campus and keeping in touch with college friends.”

“We are deeply grateful to Jerry Rudman’s family for choosing to memorialize his life by providing educational opportunities to deserving young people. Scholarships are a way of investing in the future, as well as a means of strengthening our university. The gains we have made in our ability to recruit strong students and offer them a world-class education from the best faculty would not be possible without the private support from those who care about Ole Miss,” Stocks said.

Growing up, Rudman attended St. Francis of Assisi in Brookhaven before graduating from Brookhaven High School. He was an Eagle Scout in Troop 119.

Rudman earned a bachelor’s degree in accountancy from Ole Miss in 1982. Before he graduated, he accepted an offer to become an accountant with Texas Eastern Oil Co. in Houston and later became associated with Johnson & Johnson, where he worked for 10 years. He then joined GlaxoSmithKline, where he had been promoted to vice president of the Center of Excellence for Clinical Study-Cardiovascular and Metabolism. He resided in New Hope, Penn.

The Jerry Rudman Memorial Scholarship is open to Brookhaven High School students. Each recipient will be chosen by a university committee, when the date of the first applications is determined. The scholarship will be open for all majors, and recipients must maintain a minimum 3.0 grade-point average.

Smith – who also has two other children who graduated from Ole Miss and another from the Air Force Academy – said she wants future scholarship recipients to know about her son’s work ethic and how it impacted his career success.

“All his life, Jerry always worked at something,” she said. “When he was in high school, he bagged groceries and learned to operate the cash register at one store, and when he was older, he worked for his father in his CPA firm. Our whole family believes in a strong work ethic.”

The Jerry Rudman Memorial Scholarship fund is open for gifts from individuals and organizations. To contribute, go to www.umfoundation.com/makeagift, call (800) 340-9542, or mail checks to the University of Mississippi Foundation at 406 University Avenue, Oxford, MS 38655.