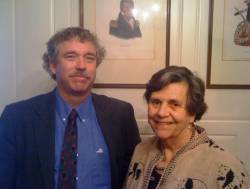 (OXFORD, Miss.) – A new $200,000 fund at the University of Mississippi’s Center for the Study of Southern Culture is the result of one woman’s belief that faculty members must have resources to pursue a wealth of research and scholarship.

Philanthropist Leila Wynn of Greenville recently provided a $100,000 challenge grant that has been matched with $100,000 in funds from several sources, including a final push from members of the CSSC Advisory Committee. Center officials said the fund will enhance research on the American South, as well as impact faculty recruitment and retention.

“Leila Wynn has been a great supporter of the Center for the Study of Southern Culture and the University of Mississippi for some years,” said Ted Ownby, CSSC director. “She studied Faulkner here, and she knows the needs of scholars from her work with UM and other colleges and universities. She knows that scholars need time to research, think and write, and this gift will be a wonderful way to allow our faculty the freedom to do that.”

Southern Studies faculty members have ongoing research projects on such topics as religious history, literature and globalization, race and museums, the blues and the devil, the contemporary small-town South, and African-American identity in the contemporary urban South.

“Mrs. Wynn’s gift represents a significant improvement in the Center’s support for faculty scholarship. Over the next few years, it will be exciting to see the results,” Ownby said.

Wynn – who has supported the CSSC since its founding in 1977 – said she believes in the study of Southern culture and the center’s work.

“History gives people an insight into the region’s potential and its problems,” she said. “It also gives us a sense of pride and a belonging to a place.”

After helping organize the Friends of the Center organization and serving for many years on the CSSC Advisory Committee, Wynn said she turned her attention to faculty support when her grandson, Charlie Weissinger of Rolling Fork, was earning a degree in Southern studies at UM.

“Faculty members are absolutely essential to a strong program,” Wynn said. “I feel that really worthy faculty members should be supported in order for them to more actively pursue their work. I was very impressed with the education my grandson received.”

In addition, Wynn has made significant contributions to the William Faulkner Collection and other Southern studies sources at the University Libraries, including many first edition and limited edition manuscripts.

“Mrs. Wynn has been a wonderful longtime supporter of the Department of Archives and Special Collections in the J.D. Williams Library,” said Jennifer Ford, head of the archives. “Through her help we have been able to complete several projects and add significant holdings to the department.”

Wynn supports an array of religious, educational, environmental and cultural institutions throughout the state of Mississippi and on the national level. A native of Austin, Texas, she settled in Mississippi more than five decades ago after earning an undergraduate degree from Smith College and a master’s degree from the University of Texas in English literature. She also studied at Ole Miss and Delta State University. In recent years, Episcopal Seminary of the Southwest in Austin presented Wynn with an honorary doctor of humane letters degree, and Millsaps College recognized her with an honorary doctor of public service degree.

Named Philanthropist of the Year in 2000 by the Mississippi Chapter of the National Society of Fund Raising Executives, Wynn is a life trustee of Millsaps College, where three of her four children graduated, and has served as board chair of the Straddleford Foundation, a private family foundation.  Among her many leadership commitments, she served on the boards of the National Wildflower Research Center in Austin, University of Texas’ Humanities Research Center, Garden Club of America, and King’s Daughters Hospital and Community Counseling Center, both of Greenville. She continues to serve on the board of the Mississippi Fish and Wildlife Foundation and is an active, longtime parishioner of St. James’ Episcopal Church in Greenville, where she has been a vestry person and warden.

Wynn has served as board chair of First National Bank of San Augustine, Texas, as well as vice president and director of Weissinger and Wynn in Greenville, a cotton, soybean and corn farming operation. She also is active in management of family timber holdings in Texas and Louisiana.