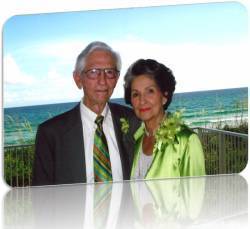 OXFORD, Miss. – Frank and Joy Tindall of Indianola have woven the University of Mississippi into the fabric of their lives for decades, and now they are strengthening the university’s ability to impact others with a $100,000 gift honoring UM Chancellor Emeritus Robert Khayat.

“Robert Khayat was the ideal chancellor,” said Frank Tindall, a 1939 UM alumnus and a longtime university supporter. “He made some tough decisions and worked to position Ole Miss as one of the leading universities. The university made great progress under his leadership, particularly initiatives such as the one that brought a Phi Beta Kappa chapter to the Oxford campus.”

Khayat, who recently retired, said he is humbled by the Tindalls’ gift and appreciates what the family means to UM.

“Frank and Joy Tindall are a wonderful example of the amazing families who make up our larger Ole Miss family,” said Khayat. “The Tindalls have shown their love for the University of Mississippi by maintaining lifelong ties and providing generous support. Their extraordinary gift will touch many students who come here to pursue high-quality educational opportunities and as an added benefit, establish enduring relationships.”

Frank Tindall met his wife, Joy Moore of New Orleans, at a dance in Indianola in 1941. They became engaged in May 1942, after he was commissioned as an ensign at the U.S. Naval Academy’s V-7 program in World War II. They married in March 1944. As a lieutenant, senior grade, with command of a Fleet Auxiliary Minesweeper, Tindall’s active service duty ended in 1945, when he returned to Indianola and met his six-day-old daughter. He continued in the Naval Reserve until 1952, retiring as a lieutenant commander.

After his service in the U.S. Navy, Tindall began farming in Indianola, raising cotton, soy beans, rice, catfish, cattle and horses through the years, as well as Labrador retrievers. He also immersed himself in positions of service in his community and state.

Tindall was one of seven founders of the First Savings and Loan Association in Indianola and one of five signers of the charter establishing the Reformed Theological Seminary in Clinton. To further reflect his belief in the value of education, he served 15 years on the Indianola Public School Board.

Tindall devoted more than 40 years to serving as director of the Holly Ridge Gin Company. He was a director of the Production Credit Association for 35 years, as well as director and board member of Delta Western, the former president of the Indianola Rotary Club and a Paul Harris Fellow.

The Tindalls are active in the First Presbyterian Church of Indianola. They are the parents of three adult children: Frank Tindall Jr. of Indianola and Oxford, Joy Aden of Jackson and Helen Thurber of Mobile, Ala., all Ole Miss graduates. The couple said they expect many more members of their family to continue the tradition of attending the university, as they have eight grandchildren and nine great-grandchildren.