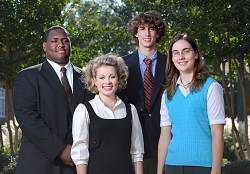 The Trent Lott Leadership Institute at the University of Mississippi has awarded Lott Leadership Scholarships to freshmen (from left) Caleb Herod of Abbeville, Mary Allen Langford of Atlanta, Nathan Dye of Jackson and Kaylen Addison of Purvis. UM photo by Kevin Bain.

OXFORD, Miss. – Four University of Mississippi freshmen have been awarded the fall 2008 Lott Leadership Scholarships by the Trent Lott Leadership Institute. The students were chosen for the awards based on their leadership ability, academic performance and record of community service.

The prestigious scholarships provide $10,000 per year for four years and are awarded to entering freshmen who will pursue a bachelor’s degree in public policy leadership at the Lott Institute.

"This is our fourth year offering the scholarships, and it’s very difficult to make these decisions since we have a strong application file," said William Gottshall, executive director of the institute. "We are proud of these four young adults and look forward to watching them grow academically on campus." The new Lott scholars are Kaylen Addison of Purvis, Nathan Dye of Jackson, Caleb Herod of Abbeville and Mary Allen Langford of Atlanta.

Addison, a graduate of Oak Grove High School, participated in the summer Lott Leadership Institute for High School Students. A National Merit Finalist, she plans a double major in public policy leadership and mechanical engineering. In high school, she served as vice president of the debate team and participated in Mu Alpha Theta, Beta Club, National Honor Society, OGHS Forensics Team and the Military History Society. She is the daughter of Clifton and Karen Addison.

"Upon graduation I want to work as a lobbyist for either an independent lobbying firm or an industrial company, preferably at the federal level," Addison said.

Dye, a graduate of Jackson Academy, said the scholarship is a catalyst that will push him toward his goals. In high school, he was student body president, class president and vice president of Habitat for Humanity. He participated in the National Honor Society, Mu Alpha Theta, Fellowship of Christian Athletes, Spanish Club, varsity basketball and swim team. He is the son of Hamp and Shannon Dye.

"As a recipient of the scholarship, I want to represent the Lott Leadership Institute to the best of my ability, and I also hope that I’m able to find success and enjoyment in the great opportunities Ole Miss has to offer," Dye said.

As a Lott scholar, Langford wants to gain a greater understanding of the political and public policy world to combine it with her second major, international studies. She participated in the summer Lott Leadership Institute for High School students. An honor graduate of the Lovett School, she was a member of the National Honor Society, Fellowship of Christian Athletes and Student-to-Student Leadership Team. She participated in theater activities and played varsity volleyball and golf. She led a Bible study for freshman girls at her high school and did volunteer work for Habitat for Humanity. Her parents are Dr. David and Melissa Langford.

"The scholarship means a great deal to me because it recognizes me as a potential leader, and I’m honored to be named among the recipients in my group," Langford said. "It’s humbling to know that someone thinks I could be an impact and influence on society."

A graduate of Lafayette High School and a Rural Medical Scholar, Herod wants to be a leader on the Ole Miss campus. He participated in the National Honor Society, Fellowship of Christian Athletes, Big Brothers and Big Sisters of Mississippi, and Mu Alpha Theta. He played varsity football and was the announcer for the varsity baseball team. He is the son of Dr. James and Ann Herod.

"I’m honored that someone believed in me to participate in this program because all of us (Lott scholars) are dedicated to the service of others," Herod said.

Gottshall said the institute prepares students to enter the workforce or to pursue other academic endeavors.

"This is an opportunity to attract extraordinary students not only academically but from a leadership standpoint," Gottshall said. "The most important role we play is to prepare these scholars to compete in a global environment."

For more information about the Lott Leadership Institute, visit http://www.lottinst.olemiss.edu/ .