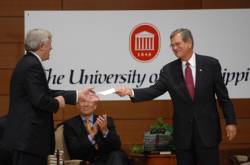 OXFORD, Miss. – Former Mississippi senator Trent Lott has made a $250,000 gift to a University of Mississippi scholarship endowment that honors his wife.

“We are grateful to Senator Lott for his continued support of Ole Miss and are thankful to those friends who created this scholarship,” said UM Chancellor Robert Khayat. “The Patricia Lott Scholarship ensures that Ole Miss will continue its long tradition of nurturing strong leaders for our state and nation.”

Recipients of the Patricia Thompson Lott Scholarship are students in UM’s Lott Leadership Institute who are incoming freshmen from Mississippi with demonstrated leadership abilities. Lott scholars are required to pursue a major in public policy leadership. Besides maintaining academic standards, the students are expected to continue their commitment to community service. To help them balance these requirements, they are paired with faculty mentors.

The Patricia Thompson Lott Scholarship was originally established in 2005 with gifts from Lott Institute executive director Bill Gottshall, and his wife, Donna; state director for Sen. Lott, Guy Hovis and his wife, Sis; and Senate Secretary Gary Sisco and his wife, Mary Sue.

Lott’s gift is part of the university’s MomentUM campaign, a four-year initiative to raise $200 million. Funds raised through the campaign will support scholarships, graduate fellowships, faculty support, a basketball practice facility, residential colleges and a new law school on the Oxford campus. Also in the plans are a cancer center at the UM Medical Center and a new building to house the School of Pharmacy, both in Jackson.