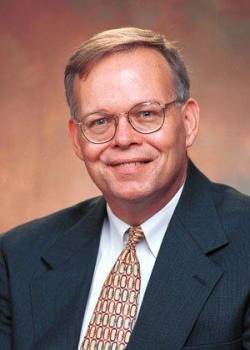 Cascio announced the Class of 2008/Thomas J. "Sparky" Reardon Scholarship last week at the university’s annual Hall of Fame induction ceremony. The Class of 2008 plans to raise at least $25,000 to endow the scholarship so that it can be awarded in perpetuity to students who demonstrate financial need and strong leadership abilities.

Reardon, assistant vice chancellor for student affairs and dean of students, said he was "humbled and honored" by the announcement.

The scholarship serves as the 2008 senior class project, which is chosen each year by class officers and an executive committee. The committee of some 60 students voted during the fall semester to create a scholarship and name it for Reardon.

"Endowing a scholarship in Sparky Reardon’s name as our senior class project is the best way we can think of to honor what he’s done for Ole Miss students for almost 30 years now," Cascio said. "He’s committed himself to ensuring that we have a positive, productive experience at Ole Miss."

UM Chancellor Robert Khayat agreed: "Sparky Reardon has for a long time been an integral part of the Ole Miss family, and we’re thrilled the senior class is honoring him in such a meaningful way. Our first priority is creating opportunities for students, and we are grateful to the Class of 2008 for helping us do that."

All gifts will count toward the university’s MomentUM campaign, a four-year initiative to raise $200 million. The campaign, which ends in December 2008, already has raised more than $170 million for scholarships, graduate fellowships, faculty support, a basketball practice facility, residential colleges and a new law school on the Oxford campus. Also in the plan is a cancer center at the UM Medical Center in Jackson.