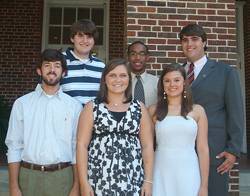 OXFORD, Miss. – Since its founding in 1848, the University of Mississippi has nurtured state and national leaders, and that tradition continues including special training opportunities through the Trent Lott Leadership Institute.

Six freshmen have entered UM this fall as recipients of $40,000 Lott Leadership Scholarships, which includes association with the institute. The exceptional students are chosen for the awards based on their leadership ability, academic performance and record of community service.

"This scholarship ensures that Ole Miss will continue its long tradition of nurturing strong leaders for our state and nation, and the caliber of these recipients proves that point," said Chancellor Robert Khayat, who invites the Lott Scholars to join the Chancellor’s Leadership Class.

Scholarship recipients are Chelsea Caveny of Hattiesburg, Christopher Cox of Moss Point, Richard Walters of Brandon, Katie Watson of Louisville, and Alex McLelland and Matthew Henry, both of Madison.

Lott Scholars are required to pursue the university’s undergraduate degree program in public policy studies, which is the first such degree program to be offered in the state. Besides maintaining academic standards, the students are expected to continue their commitment to community service. To help them balance these requirements, they are paired with faculty mentors in their major fields of study.

"The faculty members understand that these young leaders will need guidance to help lead Mississippi and America into the future," said Bill Gottshall, executive director of the Lott Institute. "We commend each of these students on receiving this scholarship, and now we hope to offer them the education, skills and experience needed to endure as tomorrow’s leaders."

At Oak Grove High School, Caveny served as student body president, forensics team tournament director and dance team captain. A member of the Red Cross Club and National Honor Society, she was a delegate to Girls State and was one of two Mississippi senators there chosen to serve at Girls Nation. Her awards include a finalist for the Youth Advocate of the Year and a National Forensics League All-American. A member of St. Thomas Catholic Church, her community service included traveling to Saltillo, Mexico, as a missionary and volunteering for Vacation Bible School.

At Moss Point High School, Cox served as student council president, class president and drum major. An honor roll student, he was selected for the American Legion Boys State and American Legion Boys Nation. His honors also include runner-up for governor of Boys State, and he was a nominee for president of Boys Nation. His community service included volunteering at the local nursing home and for Compassionate Friends, Environment Clean Up, Big Brothers of America and Hurricane Katrina relief.

At Madison Central High School, McLelland served as student body president, vice president and representative. An honor roll student, he was elected Boys State governor, served on the Mayor’s Youth Council and paged for Gov. Haley Barbour. His honors include the Principal’s Leadership Award and the Madison Central Citizenship Award. A member of Ridgecrest Baptist Church, he volunteered for mission trips to Montana, Wyoming and the Dominican Republic. He also participated in Relay for Life, Walk for Diabetes, Mississippi Food for Families campaign and Make-A-Wish Foundation fundraiser.

At Jackson Preparatory School, Henry served as editor of the school’s newspaper, captain of the debate team, vice president of the student body and drum major. A National Honor Society member, he was chosen state president of the Junior Classical League, chaired the Mississippi Governor’s School and was a member of the Junior Engineers of Tomorrow Society. His honors include National Merit Semifinalist and Classical Heritage Scholar. A member of Christ United Methodist Church, he was a frequent volunteer in community service, including the March of Dimes and Special Olympics.

At Northwest Rankin High School, Walters was secretary of the Fellowship of Jewish People, public affairs representative of the executive council and president of the Beta Club. An honor roll student, he served on the Board of Governors for Youth Leadership Jackson. His awards include maxima cum laude of the national Latin exam and multiple Student of the Month honors. A member of St. Pauls Catholic Church, his community service included chairing the United Way Youth Donor Investment Committee and participating in Hurricane Katrina relief. He also volunteered for work with the American Red Cross, Salvation Army, Relay for Life, Habitat for Humanity and the Blair E. Batson Children’s Hospital.

At Winston Academy, Watson served as co-editor of the Gazette, vice president of the student body and captain of the Fellowship of Christian Athletes. A member of the National Honor Society, she was a Mississippi Governor’s School Scholar and a STAR Student. Her other honors include winner of the U.S. Achievement Academy English Merit Award, Prudential Spirit of Community Awards Honoree and President’s Volunteer Service Award. A member of First Baptist Church, she volunteered for Vacation Bible School; mission work in Tennessee, Georgia, Massachusetts and Texas; Relay for Life and Mississippi Food Network.

For more information about the Lott Institute, visit http://www.lottinst.olemiss.edu.