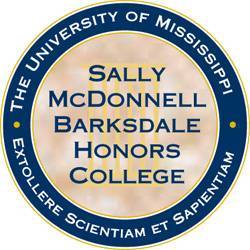 OXFORD, Miss. – Eleven students from Mississippi, two from Louisiana and one from the Ukraine have entered the University of Mississippi this fall on prestigious scholarships to the Sally McDonnell Barksdale Honors College.

During the freshman year, students in the Honors College take interdisciplinary courses not offered elsewhere at the university, classes that expose them to critical thinking in the arts, sciences, humanities and social sciences.

They also enroll in honors sections of courses in various disciplines to fulfill hours in their majors or to meet general requirements. Additionally, they work under the guidance of a professor on a significant research project, which produces an honors thesis in the student’s senior year.

Recipients of the Harold Parker Memorial Scholarships are Carla Janette Aguilar of Hazlehurst and Brittany Nicole Simpson of New Albany.

Alexander was a National Merit Semifinalist at Jackson Academy. A member of the National Honor Society and Mu Alpha Theta, he participated in the school’s musical, served on the newspaper staff, and ran cross country and track. He plans to major in international studies.

Clark, a National Merit Semifinalist, was named to the Pearl High School Hall of Fame. A STAR student and member of the National Honor Society, he was listed in Who’s Who Among American High School Students. He was student body president and captain of the basketball team. His volunteer efforts included service at the Blair E. Batson Children’s Hospital, Habitat for Humanity and Ronald McDonald House. His major areas of study are biology and history.

Dhossche was ranked first in her class of 387 at Madison Central High School. A National Merit Semifinalist, she was active in Mu Alpha Theta, the Physics and Astronomy Club, Art Club and Chess Club. She plans to pursue a career in medicine.

Gilbow was a STAR student, Coca-Cola Scholars semifinalist and member of the National Honor Society. Listed in Who’s Who Among American High School Students, he was an Eagle Scout and played varsity tennis, soccer and cross-country. He was a volunteer with the Boy Scouts, Habitat for Humanity and the American Lung Association. He is planning a career in medicine.

Knox graduated from Amory High School in 2002 and joined the United States Navy. He is a Command Equal Opportunity Representative at Camp As Sayliyah, Qatar. He plans to major in history.

Wesley was ranked second in his class of 265 at Hattiesburg High School, where he was a Wendy’s High School Heisman representative and named to Who’s Who Among American High School Students. He was an Eagle Scout and on the varsity soccer team. He plans to major in mechanical engineering.

Carbrey, who ranked second in her class of 364 at Northshore High School, was a national merit commended student and an outstanding achievement award winner. She was a member of the National Honor Society, Beta Club, Robotics Club and the school band. She was a volunteer with Habitat for Humanity and the local soup kitchen. She plans a career in pharmacy.

Lingle attended Mandeville High School, where she was ranked first in her class of 405. She was a member of National Honor Society, Mu Alpha Theta and Key Club. She was a finalist for her school’s Student of the Year and was a Skipper Scholar and Taylor Audubon Scholar. She was a mentor, math tutor and varsity cheerleader. Her major is art history.

Lukienko, a native of the Kyrgyz Republic, graduated from Oxford High School, where he was on the principal’s honor roll and recipient of an outstanding student award. A member of the National Honor Society and Mu Alpha Theta, he served on the Math and Science Team. He looks forward to a career in pharmacy.

Moffitt, a National Merit Semifinalist, graduated from Madison Central High School. A member of the Beta Club and Mu Alpha Theta, she participated in the band. She was active in her church youth group and choir. She is pursuing a career in medicine.

Shkilko graduated from Kharkiv School No. 3 in the Ukraine, where he was class president and ranked first in his class of 96. He won a gold medal for academic excellence, received the Best Student at an Educational Institution Award and placed first in the regional student Olympiad in English, physics, geography and law. He also was a candidate in master’s of sports in ballroom dancing. His major areas of study are economics and mathematics.

Smith was ranked fourth in his class of 137 at New Albany High School, where he was a STAR student, a member of the National Honor Society and a Wendy’s High School Heisman nominee. He was active in the youth group and choir at First United Methodist Church. He is majoring in history.

A graduate of Copiah Academy, Aguilar was a member of the National Honor Society, Mu Alpha Theta and Beta Club. She was class president for two years and listed in Who’s Who Among American High School Students and on the National Honor Roll. She plans to major in English.

Simpson, who ranked first in her class of 137 at New Albany High School, was a member of the National Honor Society and Mu Alpha Theta. Listed in Who’s Who Among American High School Students, she was a Congressional Award winner and a published poet in the Anthology of Poetry by Young Americans. She plans to pursue a career in pediatric medicine.

For more information about the Honors College, visit http://www.honors.olemiss.edu.