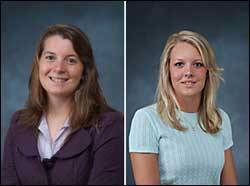 Two students in the Sally McDonnell Barksdale Honors College at the University of Mississippi have been selected to receive Barksdale Awards, previously known as Extraordinary Student Awards.

Miriam "Mimi" Abadie of Hattiesburg and Mary Margaret Peterson of Olive Branch were presented the awards at Honors Day.

The $5,000 award supports creative, courageous projects proposed by talented students who are willing to take some risks with their time and efforts and who propose ambitious, independent programs of study, research or humanitarian effort.

Debra Young, assistant dean of the Honors College, said the Barksdale Awards were established to encourage students to test themselves in environments that don’t have the built-in safeties of a classroom, teaching lab or library.

"It takes courage to go into the world on your own terms, determined to set your own criteria for success and to learn by experience," Young said. "We have to be sure that the winners of the award have a good plan as well as an exciting idea, but then we just let them get on with it. It’s a little scary for us too, as administrators and teachers, but we have some extraordinary students, and the Barksdale Award supports the out-of-the-ordinary undergraduate experience."

This summer, Abadie, a senior philosophy and English major, plans to travel for eight weeks to Senegal, a place with which she is already familiar after having studied there last spring. She is to explore the cultural environment for music and dance featuring a particular African drum, the djembe. She is to have a five-week internship under a Senegalese drum maker, making her own drum, and plans to record different musical accounts in villages and cities, as well as conduct more traditional research at the West African Research Center.

"My grandparents were missionaries in Nigeria, and my mom grew up there, so I have always been around the African influence," Abadie said. "I always knew I wanted to study abroad there. While I am there this summer, I want to learn to play the djembe better because there are not many female players, and I also want to develop better woodworking and language skills."

In his letter of recommendation, William F. Lawhead, chair of philosophy and religion, said Abadie’s proposed project is innovative, highly independent and is certain to yield fruitful results.

"Her decision to spend a semester in Senegal last spring and her current project shows that she is an independent, intellectually aggressive young woman, who is willing to step into a third-world country, and an even more underdeveloped portion of that region, in order to learn about other people and their way of life," Lawhead said.

Abadie said she wants to grow at doing things on her own to become more independent and confident so that she can return to Africa after medical school and conduct research.

Peterson, a junior biochemistry major, also plans to return to a place she has been before: Malawi, Africa, which has a population of 12 million. Of those, 1.2 million are child orphans who have lost either one or both parents to AIDS or an AIDS-related disease. In 2006, Peterson spent two weeks working with American doctor Mark Boersma and witnessed firsthand the effects of HIV/AIDS on his patients.

During the summer of 2008, she plans to spend time in Salima, a new village built by Children of the Nations program in Lilongwe, involved in AIDS research. She then hopes to participate as a volunteer intern with Children of the Nations, tutoring Malawain children and assisting in the care of orphans. The Barksdale Award is funding the research portion of her stay, and she is to use private funds she has raised through other means to fund the volunteer portion.

"Being chosen as one of this year’s Barksdale Award winners is such an honor," Peterson said. "It is so encouraging to know that the Honors College supports my trip to Malawi and believes that I can accomplish the proposed task that this trip entails.

"The AIDS epidemic sweeping the continent of Africa may seem to be an unconquerable situation, but there are many amazing people contributing to the discovery of new treatments and consequently the improvement of many lives. I am very privileged to have the opportunity to assist with research being conducted in Malawi to improve the HIV/AIDS treatments and increase public education and awareness."

Peterson said she hopes to return to Malawi to work as a doctor upon her completion of medical school and residency.

"Mary Margaret is an ideal choice for the Barksdale Award," Pedigo said. "She personifies the global awareness and social justice focus of the Honors College not just in word, but in deed. She is a woman who is going to make a difference in the world. She does not shy away from the enormous problems in health care in Africa. Rather, she embraces the challenge and asks what she can do to make a difference in the lives of individuals."

This year is the third competition for the Barksdale Awards, with Robert Wicks and Douglas Ray as previous recipients.