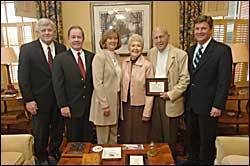 Charles Palmer of Forest learned about an early birthday gift recently when UM Chancellor Robert Khayat informed him that his children had founded an Ole Miss First Scholarship in his name.

"I can’t think of anything that I would’ve appreciated more," said Palmer, who celebrates his 80th birthday Sept. 17. "It was such a surprise."

Palmer’s son, Scott, along with Palmer’s daughter and son-in-law, Carol and James Threadgill, established the Charles Palmer Ole Miss First Scholarship. They came up with the idea during the holidays and asked the chancellor to help them surprise the Ole Miss alumnus.

"We had the chancellor call him to say, Next time you’re in Oxford, I want to sit down and talk to you,’" said Carol, an Ole Miss alumna. The Threadgills live in Tupelo, where he is vice chairman of BancorpSouth.

The first recipient of the Charles Palmer Ole Miss First Scholarship is to be an incoming freshman enrolling this fall.

Besides tuition, Ole Miss First Scholarships include a unique mentoring program that provides a mentor for each scholar during his or her four years at UM. Charles Palmer and his wife, Jean, who live in Forest, spend quite a bit of time in Oxford and plan to become mentors to the inaugural Palmer Scholarship recipient.

"We thought that would be a neat way to honor him for his 80th birthday," said Scott Palmer, a 1978 Ole Miss business administration graduate who, with his father, runs Palmer Insurance Agency in Forest. "We’re glad we could do it. We wanted to have the scholarship in place for a student in the fall, so we decided to surprise Daddy early."

Khayat said he enjoyed being involved in the surprise. "One of the privileges of serving as chancellor is the occasional opportunity to participate in a heartwarming expression of family love," he said. "The surprise gift of an Ole Miss First Scholarship to Charles Palmer by his children was one of those life-enriching experiences." Jill Waycaster, development officer for the Ole Miss First scholarship program, met the Threadgills last year in Tupelo and told them about Ole Miss First.

"The Palmers and the Threadgills are great people and longtime supporters of Ole Miss," Waycaster said. "This scholarship is another remarkable gesture of support from a fine family."

This year, the Ole Miss First program provided scholarships for 43 students. For more information on the program, including how to contribute, go to
http://www.umf.olemiss.edu/intermed/annual/home/specialprograms.php.