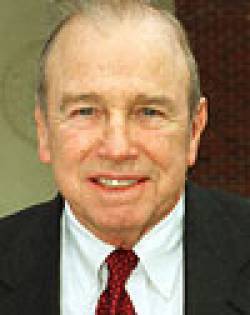 Late UM alumnus and Jackson attorney George Hewes III is to be remembered for his legacy of leadership and giving with two Ole Miss First scholarships bearing his name.

OXFORD, Miss. – George P. Hewes III lived unselfishly, sharing his time and money to help others. His service ranged from co-chairing a major fund-raising campaign at the University of Mississippi to heading the Stewpot Community Services in Jackson.

The late Jackson attorney placed great value on education and throughout his long career gave generously to Ole Miss, where he received degrees in business and law.

Chancellor Robert Khayat has designated that the funds be used to establish two scholarships so that his friend’s legacy can continue in perpetuity through the lives of many future Ole Miss students.

"It is not an exaggeration to acknowledge that George Hewes was one of our most loved and respected graduates," Khayat said. "A leader in every aspect of his life, including his profession, church, and community, George made lasting contributions to our society. Continuing his legacy through the scholarships bearing his name – is perhaps the most appropriate expression of our lasting admiration and affection for him."

The awards are part of the Ole Miss First Scholars Program, which provides recipients with $4,500 per year for four years of study. The scholar must maintain at least a 3.0 cumulative grade-point average as a full-time student, in addition to meeting other requirements, including participation in a mentoring program.

"George Hewes believed in education as an instrument for improving the quality of one’s life, so it’s fitting that two Ole Miss First Scholarships will bear his name and be awarded to future leaders in Mississippi," said Ellen Rolfes, major gifts officer in University Advancement.

Hewes graduated from the Ole Miss business school in 1950. After two years in the U.S. Marine Corps, he returned to the campus and graduated from the law school in 1954. He retired from the Jackson law firm Brunini, Grantham, Grower & Hewes in 1999. Highlights of his legal career included his election as a fellow of the American College of Trial Lawyers and service as a regent in that organization. For 12 years, he was a Mississippi Commissioner to the National Conference of Commissioners on Uniform State Laws.

Hewes accepted Khayat’s call in 1999 to co-chair the university’s Commitment to Excellence Campaign’s National Steering Committee, with a fund-raising goal of $200 million. Two years later when the campaign ended, $525.9 million had been received in contributions. His service to Ole Miss also included terms as president of the Alumni Association, Law Alumni Chapter and the University Foundation.

After his retirement, Hewes accepted the post of executive director for Stewpot Community Services in Jackson, a ministry to the poor and downtrodden. He served on the board of directors of Trustmark National Bank and over the years provided leadership as president of civic and community boards and as chancellor of the Episcopal Diocese of Mississippi.

For more information about giving programs at the University of Mississippi, visit