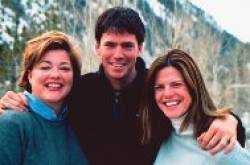 The children of the late philanthropist Sally McDonnell Barksdale of Jackson, Miss., have created a scholarship at the University of Mississippi to follow her lesson: Give back to your community by choosing wisely where you will make the greatest impact.

Susan Barksdale Howorth, Betsy Barksdale Pokorny and David Barksdale chose education by endowing a $100,000 scholarship fund through the Ole Miss Women’s Council for Philanthropy. Sally McDonnell Barksdale, a Hazlehurst native and UM alumna, was a founding member of the council.

“We decided a Women’s Council scholarship was the appropriate tribute to Mom because she had so enjoyed her work on the council and really felt like she was helping students,” says Howorth of Oxford. “Mom and Dad had done so much together for the university, but Mom served on the council on her own. There were so many gifts contributed in her name to the Women’s Council, and we wanted to do something as siblings. It is comforting to know that for years to come there will be a Sally Barksdale Women’s Council scholar because of a gift that my brother, sister and I gave together.”

Barksdale was married for almost 40 years to Jim Barksdale, also a UM alumnus and one of the founders of Netscape. The couple provided millions of dollars in help to Mississippians, including the endowment for what is now called the Sally McDonnell Barksdale Honors College on the UMOxford campus, a minority scholarship program for medical students at the UM Medical Center in Jackson, and $100 million for a statewide Barksdale Reading Institute.

“They shared a strong bond with Mississippi,” David Barksdale of New York says of his parents, who were Mississippi natives but had lived in Tennessee, California and Colorado before moving back to the state.

“Mom and Dad were so focused on education, and Dad, of course, still is. They told us that education is a person’s passport to realizing potential, and they believed if you could focus on education in Mississippi, you could improve the state’s economic outlook.

“Mom and Dad also thought the greatest impact came from focusing philanthropic efforts on one area,” Barksdale says. “That’s a good philanthropic strategy that I plan to follow.”

The first recipient of the scholarship is Bridget Stanford of New Albany, a UM freshman majoring in elementary education. Stanford’s selection was based on her academic achievements, leadership abilities and extracurricular activities. Her father, Billy, lost his battle with cancer not long after learning of his daughter’s selection for the scholarship. Sally Barksdale also died of cancer.

“My dad was so excited for me,” Stanford says. “I think he was worried about me coming to college, but after I received the scholarship, he knew that Ms. Molly (Meisenheimer, a member of the Women’s Council and director of its leadership-mentorship program) would take wonderful care of me. This scholarship has had an awesome impact on my life. I have always been taught to give things when you can. Receiving this scholarship and having these opportunities makes me want to do the same for others.

“I want to be a teacher because so I can have a positive impact on children’s lives. I want to be their encourager to excel in school, and then maybe they will excel in life,” Stanford says.

Pokorny of Florida says she thinks her mother — “a lifelong learner who seemed to grow more intellectually after her formal education was over” — would have been pleased with the scholarship.

“She read books, newspapers, magazines — anything and everything — all the time,” the daughter says. “She would advise these scholarship recipients to set lofty goals, continue to learn, challenge their intellectual comfort zones and give to others when they can — even if it is giving of their time. My mom knew the path she chose took her exactly where she wanted to go: a place where she had the ability to share her good fortune and help others.”

Growing up in Memphis, Pokorny says she witnessed her mother’s philanthropic spirit while accompanying her to deliver “Meals on Wheels” to the elderly and homebound.

“She always loved sitting with the recipients, talking forever and listening to their stories,” the daughter says. “I think she knew most of them wanted a good conversation more than a hot meal. She thought time was the most important gift you could give. Mom also knew the potential of what women can accomplish both at home and in the workplace and wanted to be sure they would have the choice.”

Howorth agrees, saying she and her siblings learned the importance of philanthropy from their parents.

“Both of my parents taught us at early ages that giving starts in small steps,” she says. “If you learn early that philanthropy is really just the ability to give a part of your time, worth, energy and effort, then you realize how large or small your gift is doesn’t really matter — it’s the act of giving that is important. It’s the percentage of what you have that is given that determines the size of your gift.

“Mom loved the idea of encouraging women and philanthropy,” says Howorth, who is serving in her mother’s place on the Ole Miss Women’s Council. “Mom liked the idea of women deciding what causes were worth their giving and supporting those causes with both time and influence, as well as financial capabilities. Mom would have loved the idea of her three children giving one gift in her honor. She always encouraged us to pick our causes and follow our interests individually but also to realize what we could do as family. This is a way for us to remember her in a way that she would have appreciated.”

Ole Miss Women’s Council scholars, both men and women, are assigned mentors from the university community to guide them along their career paths, and benefit from leadership training. After graduation, each scholar is expected to pledge a modest amount to reseed the program.

David Barksdale says he looks forward to seeing scholarship recipients benefit from educational experiences and wants them to know his mother’s priorities.“My mom had a strong commitment to her family,” he says. “She never lost touch with the important things in life — her family, her friends and her community.”