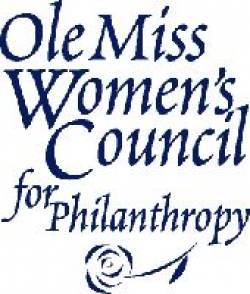 Shovels turned in the rich soil, and red roses—a metaphor for both students and the vision of the Ole Miss Women’s Council for Philanthropy—were planted at the March 28 dedication of the Rose Garden outside the Gertrude C. Ford Center for the Performing Arts.

Each of the 28 rosebushes represents a scholarship endowment of $100,000 or more—a recognized accomplishment of the Women’s Council, founded in early 2000. The garden’s rose blossoms will continually symbolize Ole Miss students who, like roses, can be challenging to raise and require much attention. But once developed and cut away from the bush, the carefully tended rosebuds can transform the world.

Unveiled at the center of the garden was “The Mentor”—a sculpture created by Jane DeDecker and presented to the Rose Garden by Sally Barksdale of Jackson. The sculpture depicts a mentor and two young people, reflecting the nurturing energy that has become the hallmark of the Women’s Council program of scholarships, leadership training, and individualized mentoring.

“About three years ago a group of women met, and we decided working together we could make a little magic of our own,” said Jan Farrington, a founding Women’s Council member who provided the leadership to make the garden a reality. “It began as a simple concept to involve women more directly in philanthropic endeavors for the University. That concept budded into the idea of providing scholarships for deserving young men and women and that these scholarships would be named by donors in honor or memory of special women in their lives.

“Then the idea blossomed into a mission that not only would we provide the scholarships, but we also would create a mentoring program to nourish and to assist, to enable and to prepare our young scholars,” Farrington said. “In the context of what’s happening in the world today, what better thing could we be doing?”

Farrington—who described the dedication as “yet another magical day on this campus”—said the Rose Garden with its sculpture is a special place of beauty that will be a visual reminder of the University community’s mission to mentor young people.

Among those recognized during the dedication were Kathryn Black, Bill Roberson, Meredith Creekmore, and Farrington, who with the University provided resources for the garden;  Ellen Rolfes, the University’s major gifts officer who planted the seed for the Women’s Council; and Molly Mesisenheimer and Sue Hodge, who direct the mentoring of Council    Scholars.

“Just as these roses that have been planted will come into bloom, this university is coming into bloom, as well,” said Chancellor Robert Khayat in addressing the transformation that has taken place across the Oxford campus—a theme that ran throughout the      dedication.

“Today we celebrate the vision of the Ole Miss Women’s Council for Philanthropy. Since its inception, this council has shown its leadership by implementing the vision that transformation requires,” Khayat said. “On the cutting edge of women’s philanthropy, the council has become a national model for philanthropy by establishing a caring and emotional connection with its mentoring program.”

Rachel McPherson of New York, current chair of the Women’s Council, and Edith Kelly-Green of Memphis, inaugural chair, presented the roll call of scholarships, donors, honorees, and scholars. Those recognized were invited to plant rosebushes in the garden.

“Unlike any other species on earth, human beings can transform the circumstances of our lives in a profound and meaningful way by what we choose to think and by what we choose to do,” McPherson said. “I would like to congratulate the Women’s Council, the donors and the scholars. I also would like to congratulate Ole Miss for letting in the light and letting in the voice.”

An average of five to seven Women’s Council scholarships are awarded annually to students entering the freshman class. Sophomores who exhibit leadership potential also are eligible. Scholarships are $5,000 per year for four years.

For more information about the Ole Miss Women’s Council for Philanthropy, contact Ellen Rolfes at the University Foundation at (662) 915-5944.

The roll call of scholarships (which includes deferred gifts), honorees, and donors

Endowed by the Meisenheimer Family

Endowed by Lynda and John Shea

Endowed by the R.H. and Mildred Center

and Arthur A. Cox Jr.

Endowed by Donna Ruth Else Roberts

Endowed by her friends and family