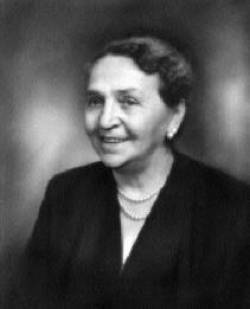 Jennie Mosby Cochran, a well-known figure on the Ole Miss campus and around Oxford during the 1940s and ’50s, served as an unofficial mentor for many college students.

Her official title was house director for the Gamma Delta Chapter of Zeta Tau Alpha fraternity, but, to her “girls,” she was lovingly known as “Aunt Jennie.” Some of the many students who benefited from her firm, but affectionate attention, along with family members, have endowed a Women’s Council scholarship in her name.

In the years immediately following World War II, the campus was severely overcrowded, and the faculty and staff were doing well to schedule classes and find accommodations for students.

“There was little or no thought given to advisers or mentors, and groups that had a good house director were fortunate, indeed,” said one of the Zetas of that era. “Aunt Jennie served admirably as a mentor during her years on campus.”

Born in Love Station (near Coldwater), Aunt Jennie joined the Ole Miss family for the 1943-44 academic year. With her youngest daughter in college and her youngest son in military service, she was free to fill an unexpected vacancy in the house directors’ ranks.

Although she was twice widowed, she overcame the many obstacles in her life and saw to it that her children  completed their college educations.

“Aunt Jennie knew the importance of a college degree,” said June Cochran Overstreet of Oxford, referring to her grandmother by the name most people used. “A scholarship is a perfect way to honor her.”

Contributions may be made in care of the University of Mississippi Foundation, 406 University Avenue, Oxford, MS 38655.