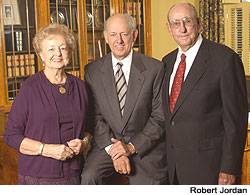 Memphis businessman Mike Starnes, center, gave $1 million to create a scholarship endowment in the name of Chancellor Khayat and in tribute to Starnes' parents, Gladys, left, and Milton, of Oxford.

UNIVERSITY, Miss. – Mike Starnes took a walk with his friend Robert Khayat on ground where both men’s roots run deep – the University of Mississippi’s Oxford campus.

As they enjoyed the classic campus setting, the Memphis businessman recognized that Khayat, the university’s chancellor, had put his heart and soul into serving their alma mater. He likened the results to a renaissance.

"The university is absolutely in the best position it’s ever been academically, athletically and aesthetically – all the way up and down the scale. As we walked the campus, Robert greeted most of the students we met by name. He’s in touch with students, alumni, faculty and staff. He’s a great communicator, manager and academic leader. He’s one of my all-time heroes and a wonderful human being," Starnes said. "I can’t say enough good things about him, and I can’t thank him enough for what he’s done for Ole Miss."

Starnes, who graduated in 1968, hopes to ignite a similar enthusiasm among the Ole Miss family to provide for future generations through student scholarships and to honor Khayat. He has given $1 million – his second major gift – to create an endowment named for the chancellor in tribute to Starnes’ parents, Milton and Gladys, of Oxford.

Based on the Starnes’ gift, the University of Mississippi Foundation Board voted unanimously to establish the Robert C. Khayat Endowment for Ole Miss First. The unrestricted scholarship money is to be awarded to students from everywhere who have achieved academic excellence.

Proposed a year ago, the Ole Miss First program aims to raise enough money from direct and deferred gifts to generate $5 million a year for academic excellence scholarships in all the university’s disciplines – a scholarship for every deserving student, Khayat described it then.

"I want this gift to be the spark that kicks off the $100 million Ole Miss First campaign and inspire others to give money directly or pledge it in their wills," Starnes said.

"Ole Miss First is a great program. Hopefully, the student scholars will contribute to making Mississippi a better place," he said. "It’s the right thing to do. Giving has to be felt in the heart, and this is definitely coming from mine."

Starnes said his gift is out of gratitude to the three people he honors.

He describes his parents as "wonderful people with very high moral values and standards. Obviously, I love them and appreciate everything they have done for me. They believe that education is very important, even though neither one of them went to college. They are proud of the fact that their children did.

"I think this is what Ole Miss First is all about. Each generation tries to do a little better in terms of educating its children and making Mississippi a better place," he said.

After earning his business degree, Starnes went on to found M.S. Carriers, a Memphis-based trucking company. Begun with only $10,000, the company became the fifth largest truckload company in the nation, boasting 5,000 trucks and 6,000 employees. In 2001, he sold the company in 2001 but remains president of the enterprise, which is a wholly-owned subsidiary of Swift Transportation, the largest publicly traded truckload carrier in the United States.

Among his many leadership positions, Starnes has been chairman of the U.S. Chamber of Commerce in Washington, D.C.

"Mike Starnes was a youngster growing up in Oxford when I came to Ole Miss," said Khayat. "As a young man he delivered local freight for his father’s trucking company while being an active high school and college student. The success of M.S. Carriers is confirmation of the unusual ability and extraordinary work ethic that Mike has demonstrated since childhood.

"During our adult lives, Mike has been incredibly generous in his support of the university through the School of Business Administration, Department of Intercollegiate Athletics and now the Ole Miss First Scholarship program," Khayat said. "There surely will be students who will emulate the career of Mike Starnes and, perhaps, 20 years from now those students will be providing scholarships for the next generation. All of us are eternally grateful to Mike for all he has done for the University of Mississippi."

This is Starnes’ second $1 million gift. The first was given in 1994 to the Department of Intercollegiate Athletics when facilities improvements were crucial to the university’s ability to recruit outstanding coaches and student-athletes to stay competitive in the Southeastern Conference. The Starnes Athletic Training Center is named in his honor.

He also has been generous to the Lott Leadership Institute on campus.

With his desire to balance athletics and academics, Starnes concluded that his newest gift should be dedicated to student scholarships.

"Ole Miss gave me the foundation to be successful," he said. "In today’s environment, you’ve got to have a college degree – that’s the price of admission to get into the show. So many young people in Mississippi don’t go to college, and so many others leave the state for their education. The Ole Miss family must share in the responsibility of helping young people by providing scholarships."

Ellen Rolfes, director of Ole Miss First, agreed. Through his profoundly important gift, Mike Starnes serves as a reminder to us that we should not forget our ‘taproot.’ If everyone in the Ole Miss family remembers this simple value and gives some amount to the Robert C. Khayat Endowment Fund, even as a deferred gift, the university will be well on its way to attracting and retaining academically strong students in Mississippi and beyond. We have Mike to thank for honoring his parents and the man he admires most in order to serve Ole Miss."

Individuals or groups may contribute to the Robert C. Khayat Endowment for Ole Miss First. For more information, contact the University of Mississippi Foundation, 406 University Avenue, Oxford, MS 38655; telephone 662-915-5944 or 800-340-9542; or e-mail at umf@olemiss.edu.