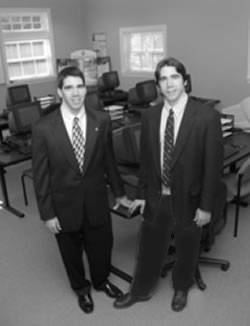 With the expansion of University Advancement, Development Services, and The University of Mississippi Foundation, it has been essential to day-to-day operations to maintain a state-of-the-art computer system.

When Lance Felker joined the Foundation team last September as systems administrator, he had one goal: install a massive upgrade and complete the conversion process as quickly and efficiently as possible.

“The old system is what is known in our business as a ‘legacy’ system. It isn’t capable of pulling information quickly enough, and it’s not Web-accessible. The new system is flexible, powerful, and fast,” said Felker.

“Now our staff will have instant access to all sorts of information from wher-ever they are,” said Felker. “This system also incorporates our accounting system and facilitates receipts processing.”

After about six months of installing the system, it became clear that there was enough work for two, so Felker called his favorite working partner: his twin brother, Kevin.
“We got our start in computers when we were about 10 years old,” said Kevin. “Our parents gave us our first computer about then, and we were fascinated. I guess we’ve both always wanted to work together. We love computers, and, needless to say, we work well together.”

“Lance and Kevin’s unique ability to complement each other in the workplace, their professionalism, and their enthusiasm for problem solving have made them outstanding additions to the Development Office,” said Director of Development Services Ron Guest. “Lance and Kevin have excellent computer skills, and both are committed to keeping the Foundation at the forefront of technology.”

“My ultimate goal as information security officer is to lock the system down—making it completely inaccessible to hacking of any sort,” said Kevin.

Lance graduated from Ole Miss in 2000 as part of the University’s first McDonnell-Barksdale Honors College class. Prepared with a bachelor’s degree in management information systems and a minor in business administration, he spent a year working as systems administrator for the Oxford-based Web site development company Vision Innovations before returning to his alma mater.