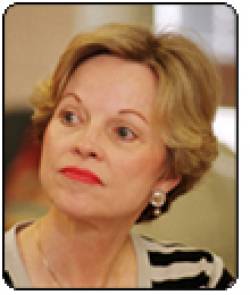 Kathryn Brewer-Black of Oxford has spent the majority of her adult like as a political activist and in service of her community. She believes in a good cause. And none is she more passionate about than the Ole Miss Women’s Council for Philanthropy at The University of Mississippi.

In fact, council member Brewer-Black feels so strongly about the group that promotes philanthropy and sponsors programs to develop outstanding leadership qualities in students, she recently bequeathed $100,000 in her will to create the Kathryn H. and David J. Brewer Council Scholarship.

Named in honor of her parents, the deferred endowment is set up for students who major in liberal arts at Ole Miss. As with all council scholarships, the recipients are selected (beginning in fall 2001) for their leadership abilities, as well as caring spirits and willingness to help others.

Throughout their college careers, the council scholars receive guidance from Women’s Council mentors, who assist them in developing career paths and networking with alumni and other professionals.

“A council leadership is the perfect vehicle to honor my parents,” Brewer-Black said. “A lot of young people are very smart, but they need to be taught the qualities of leadership. We need more young leaders to whom their peers can look up.”

For Brewer-Black, her ability to pay tribute to her parents’ lives is especially meaningful, since neither was able to complete school at Ole Miss because of lack of funds. Her father was just 6 hours from finishing his degree when his father died – leaving the college student in charge of the family business. Brewer-Black’s mother attended classes on the Oxford campus until her brother was old enough to start college. She stepped aside so he could complete a degree.

“Scholarships weren’t available then, and students didn’t work,” Brewer-Black said. “They had no choice but to leave.”

Luckily for Brewer-Black, her parents had the means to send her to school. She graduated with distinction form Ole Miss in 1962, majoring in English.

Since then, she has been heavily involved in both community service and political activism. A longtime resident of Greenwood who recently moved to Oxford, Black was president of the Greenwood Junior Auxiliary and member of the First Presbyterian Church, where she worked on a number of service-related projects.

Black also was instrumental in starting a Republican Party chapter in Greenwood at the time when there were few GOP members. Since moving to Oxford, Black has become actively involved at Ole Miss. She co-chairs the Chancellor’s Trust-Pacesetter Committee of the University’s Commitment to Excellence Campaign and is a Chancellor’s Trust member.

“To be a productive member of society, you have to get involved,” she said.

Black’s bequest makes her a member of the Ole Miss 1848 Society, which provides lifetime recognition to those who have make provisions for the University through planned testamentary bequests, lifetime trusts, or other planned gifts. The 1848 Society sets no minimum gift, and there are membership benefits. For more information, contact Tony Montgomery, director of planned and deferred giving, at (800) 340-9542 or e-mail tmontgom@olemiss.edu. For more information on the Ole Miss Women’s Council for Philanthropy Scholarship Endowment Program, contact The University of Mississippi Foundation at (662) 915-5944 or (800) 340-9542.