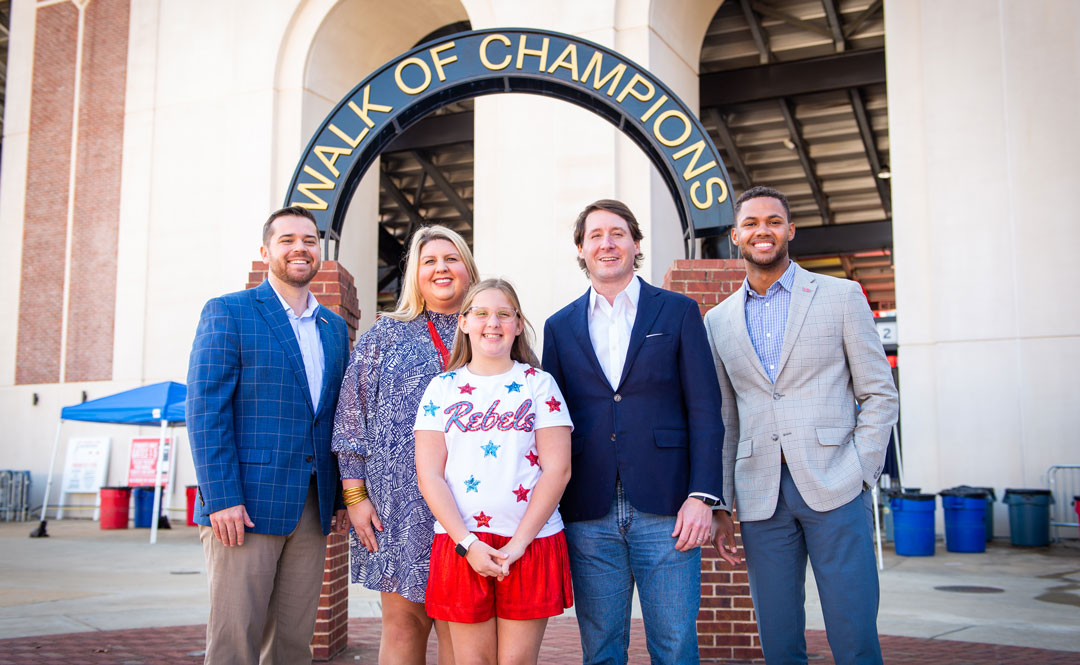 Family lineage and a love for Ole Miss inspired a University of Mississippi graduate to make a major gift to CHAMPIONS. NOW., the fundraising campaign focused on improving facilities for UM student-athletes.

“We’re excited about the momentum that the athletics programs have built and developed, and we want to lean into it. We’re glad to be a part of it,” said Forrest Johnson of Natchez, Mississippi – a 2003 graduate of the School of Business Administration.

“We want to make sure Ole Miss has the resources to build facilities that the programs need to compete for championships.”

Giving back to Ole Miss is important to Johnson because of his family’s generational loyalty to the university. His grandfather, the late Forrest Allen Johnson Sr., attended Ole Miss on the GI bill after World War II, studying law; his father, the Hon. Forrest “Al” Johnson Jr., graduated from Ole Miss with degrees in political science and law; his late uncle John Johnson earned a journalism degree in 1969.

It’s also where Forrest Johnson, then a member of Pi Kappa Alpha fraternity, met his wife, Julie Manning Johnson, a Kappa Kappa Gamma, when they literally bumped into each other at a party.

“Between myself, Julie, our family including cousins, siblings and their spouses, more than 16 of us went to Ole Miss,” Johnson said. “Ole Miss has always been special to my family.”

Johnson grew up going to Ole Miss games with his father.

“The weekend trips to Oxford were always special,” he said. “I remember attending the Vanderbilt game in 1989 and witnessing the Chucky Mullins injury. I was nine years old at the time. The way everyone rallied around Chucky Mullins after the injury and the way he is still celebrated today with the No. 38 legacy has really made an impression on me.”

“Julie and I are proud to make a gift to Ole Miss Athletics and to support the winning culture that is being built. I’m a big believer in momentum – it’s Newton’s first law of motion: objects in motion stay in motion,” Johnson said.

“I have confidence in the vision and leadership of Chancellor Glenn Boyce and Athletics Director Keith Carter to continue to develop momentum and build championship programs,” he continued. “We are very proud to support this momentum and are glad to be a part of it.”

Forrest Johnson works in the securities industry as a private wealth advisor with Ameriprise Financial. In his free time, he runs. With a goal to complete a marathon in all 50 states, he has only one more to go: the Mississippi Gulf Coast Marathon on Dec. 11.

Julie Johnson, a speech therapist in Natchez, graduated from Ole Miss with a bachelor’s degree in communicative disorders and a master’s degree in speech language pathology in 2001 and 2003 respectively. The couple has one daughter, Mary Blair, 10.

“She’s a great Rebel in her own right and loves going to Ole Miss football and baseball games,” Julie Johnson said. “She even dressed up as Tim Elko for Halloween this year and was so excited when he retweeted a picture of her in her costume.”

“It’s so encouraging to see younger alumni like Forrest and Julie understanding that gifts like this provide our future student-athletes with the training they need to succeed, thus resulting in a continually improving fan experience. Their gift is making an impact now for the future of our programs,” Hollis said.

“Additionally, it’s awesome to see the Johnsons truly reflecting the Ole Miss family with their three generations of graduates and now raising their daughter, Mary Blair, as a Rebel by bringing her to games on campus. We appreciate not only their generosity, but also their passion in traveling from Natchez to attend all our home games.”

The Van Devender Family Foundation Locker Room will receive a complete makeover and will be expanded to include a barber shop, hydro tanks, plunge pools, a players’ lounge and fueling station.

All new office spaces will be built, including separate offensive and defensive team meeting rooms, to supplement the existing Roland and Sheryl Burns Team Meeting Room. Office layouts will be streamlined for offensive, defensive, analytics and recruiting staffs, and plans include a renovated head coach’s office.

Additionally, the equipment room will be expanded along with an ESPN/SEC Network bureau camera room, a photo and video studio and a media workroom. The new Williams-Reed Foyer will welcome visitors to the Ole Miss football headquarters and the Gina and Chip Crunk Grill at 1810 will remain to prepare meals for the Rebels.

To make a gift in support of Ole Miss Athletics, visit CHAMPIONS. NOW. or contact Blair Griffith at bcgriff2@olemiss.edu or 615-957-7008.