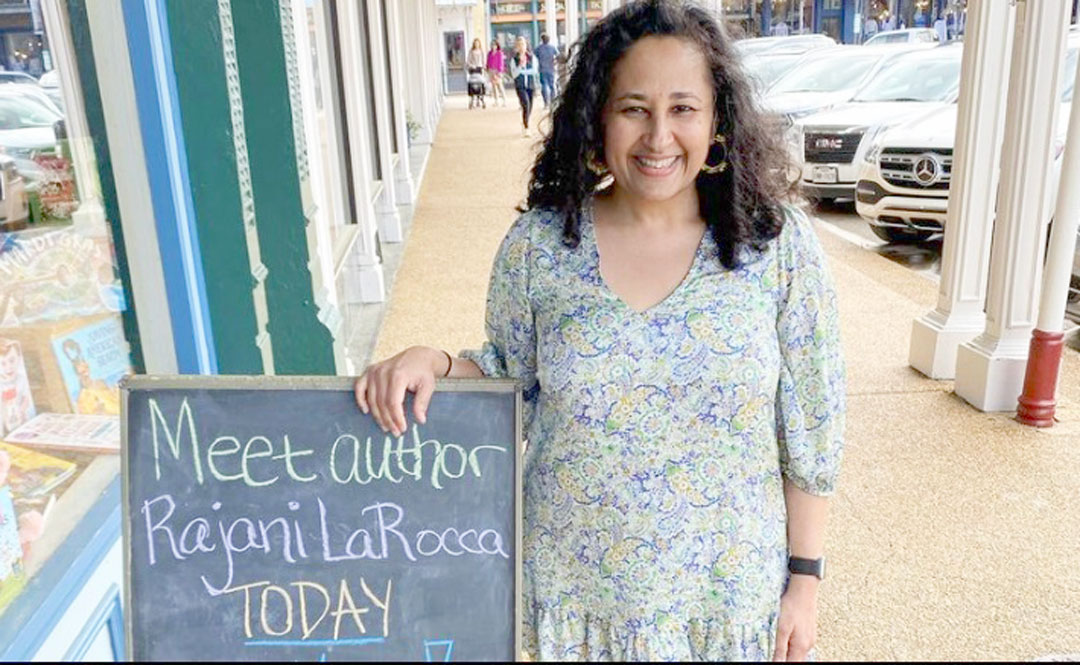 Rajani LaRocca was the featured author for the 2022 Children’s Book Festival, which will be supported by the Elaine Hoffman Scott Memorial Endowment and Memorial Fund created by her children. LaRocca read from her books “Where Three Oceans Meet” and “Midsummer’s Mayhem.”

Elementary school students will be encouraged to love reading thanks to a University of Mississippi endowment paying tribute to the late Elaine Hoffman Scott of Little Rock, Arkansas, remembered for her great passion for education and the arts.

The Elaine Hoffman Scott Memorial Endowment and Memorial Fund — which will support the Children’s Book Festival — were established with $72,000 in gifts from her son, Bran Scott of San Jose, California, and daughters, Melissa Scott of Chapel Hill, North Carolina, and Caitlin Scott of Petaluma, California.

Part of UM’s Oxford Conference for the Book — which highlights achievements of seasoned and emerging southern writers through an annual gathering of teachers, publishers, booksellers, writers, scholars, agents, editors and booklovers — the Children’s Book Festival serves more than 1,200 area first graders and fifth graders from schools in Lafayette County and Oxford, Mississippi.

Bran Scott said the gift was inspired by the desire to establish something “lasting and life-giving” that provides a tangible benefit to the causes his mother valued.

“My mom was passionate about education and about reading, particularly for children. She understood the lifelong impact a childhood with books could produce. She believed that books open doors to other worlds — real and imaginary — and that a child who has experienced a universe of worlds through books becomes an adult who believes bigger and better worlds are possible,” he said.

“The Children’s Book Festival was the perfect choice because it’s an event that engenders the love of books and reading in the children of a community she dearly loved.”

Melissa Scott agreed, saying, “Mom thought every person should have the chance to experience everything books can bring, and she thought the best way to help that happen was to make books available to children as early as possible.”

Elaine Scott supported the Friends of the Central Arkansas Library System and ran book giveaways for Reading Is Fundamental, for which she won the RIF Leader Award in 1994. When Oxford Conference for the Book began, she immediately got involved with the Children’s Book Festival to introduce readers to a range of books and authors.

“Mom was excited by every author who came to the festival, and she read their books and loved interviewing them,” she continued. “I remember the year the featured authors had written a book on unusual things that people can eat, and they brought an electric skillet and cooked fried worms. They offered samples to the horrified and delighted audience, mostly kids, and Mom promptly volunteered. She bragged for years that she had eaten worms, and they were pretty tasty.

“But she also got a bunch of those kids to try the worms and to try the book. If she’d taste worms to get readers excited, the Children’s Book Festival seemed like the ideal place to remember her,” Melissa Scott said.

“As the years passed, my mom became increasingly convinced of the importance of being able to read, to learn the great stories of history and to tell one’s own story.

“A formative experience of my life was being able to volunteer with her at RIF book distributions, where each child got to choose two books to take home and keep forever. The excitement was palpable, as children rushed to the tables of books to make their selections. I also boldly gave the kids advice about what books they should choose.

“My mother’s time in life has ended, but I know she would like good stories to continue,” Caitlin Scott said. “She would like to see all children empowered to read the stories that intrigue and motivate them and to write stories of their own lives.”

Kathryn McKee, director of UM’s Center for the Study of Southern Culture and McMullan Professor of Southern Studies, shared how the honoree was involved with the center.

“For many years, Elaine Scott was an enthusiastic participant in various dimensions of life at the Center for the Study of Southern Culture. She was an early and long-standing member of the center’s advisory committee, a faithful attendee of the Faulkner and Yoknapatawpha Conference and a regular participant in the Oxford Conference for the Book.

“Elaine had a particular soft spot for the Children’s Book Festival, and now that event will flourish for years to come with this kind support from her children. We are deeply grateful to them for supporting her legacy,” McKee said.

Afton Thomas, associate director of programs for the Center for the Study of Southern Culture, said, “The Children’s Book Festival is one of my favorite events each year because of the community partnerships. None of this is possible without each partner.”

In addition to the Center for the Study of Southern Culture, the Lafayette County Literacy Council, Junior Auxiliary of Oxford, Square Books, Jr. and Lafayette County & Oxford Public Library work together to select and host authors each year who present programs to first and fifth graders. Lafayette County and Oxford Elementary School librarians make author suggestions and create activities for the children to enjoy during the week the authors visit.

Elaine Scott spent her formative years in Oxford, Mississippi, as her father, Mark Hoffman, was chair of UM’s Department of Music. As a recipient of a Lion’s Oil Scholarship, she then earned a bachelor’s degree in English at Wellesley College in 1957. After marrying Isaac Alexander Scott Jr. and working as a middle school teacher in Springdale, Arkansas, she returned to pursue a master’s degree in English from Ole Miss. She then settled in Little Rock, where she lived more than 50 years.

“One of the things she loved about the university was its willingness, starting in the 1970s, to move outside of traditional academic boundaries. That expansive vision was also something she saw in the Center for Southern Culture and the Southern Foodways Alliance, and something she valued greatly,” said Melissa Scott.

“The other vital thing she took away from her time at the university was her lifelong friendship with Ann Abadie — who was a major force behind all of the things I have mentioned. They met while Mom was working toward her master’s degree and remained close ever since.”

To make a gift to the Elaine Hoffman Scott Memorial Endowment, send a check with the fund’s name written in the memo line to the University of Mississippi Foundation, 406 University Ave., Oxford MS 38655; or online at https://give.olemiss.edu.

For more information on supporting the Children’s Book Festival, contact Delia Childers, associate director of development for the College of Liberal Arts, at dgchilde@olemiss.edu or 662-915-3086.