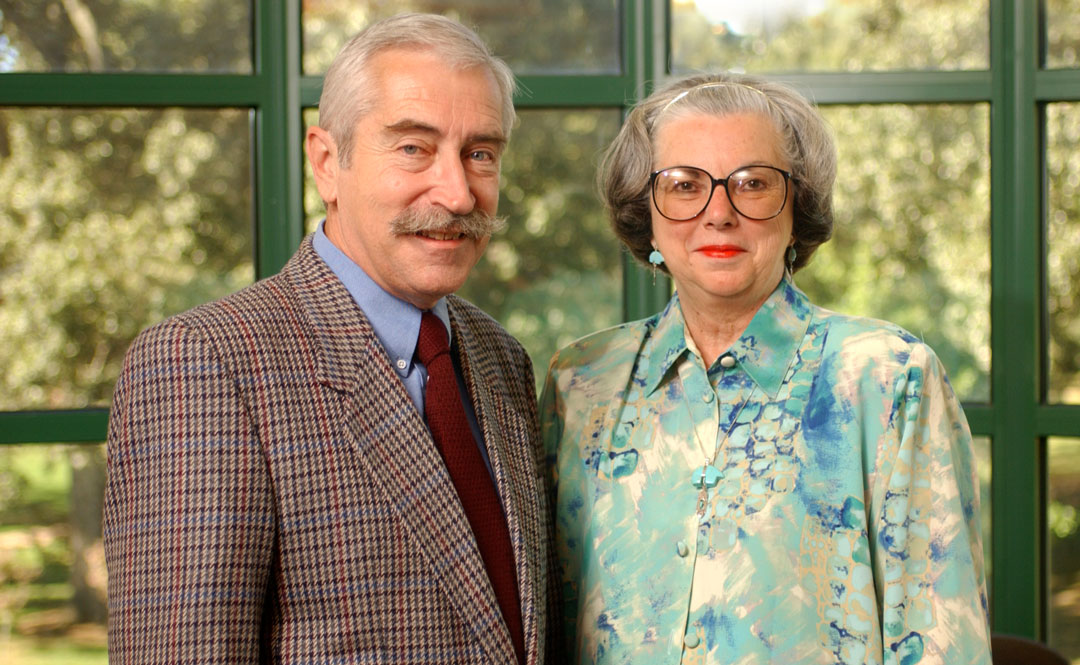 The life and work of the late Mickey Smith, here with his now late wife Mary, are being honored with a new award to recognize Pharmacy Administration students who give exceptional service.

The University of Mississippi’s Department of Pharmacy Administration is celebrating its 60th anniversary, and two leaders who built the program are being honored with a new award in their names.

The Dr. Mickey C. Smith and Dr. Dewey D. Garner Pharmacy Administration Award honors the lives and legacies of the two Ole Miss professors and provides support for deserving students enrolled in the Pharmacy Administration Graduate Program. Two anonymous donors made a $54,000 gift to start the award, and they are asking others to join them in growing the endowment.

Donna Strum, dean of the School of Pharmacy, expressed gratitude for the gift.

“This endowment is so special to me. While I was in graduate school, both Dr. Garner and Dr. Smith gave me opportunities to complete internships, to work on community pharmacy projects and to teach pharmacy courses. I am thankful that they invested in me, and I recognize that a big part of my success in pharmacy is because of them,” the dean said.

“Everywhere I go, alumni ask me about Drs. Garner and Smith and proceed to tell me stories of how they positively influenced them. I am so grateful that these two donors have established an endowment to ensure that the legacies of Dr. Garner and Dr. Smith live on forever. Because of their generosity, future faculty and students will know the impact of these two faculty members and how we all continue to benefit from their contributions to the School of Pharmacy,” Strum said.

One of the anonymous donors said, “Both Dr. Smith and Dr. Garner were longtime chairs of the department. They had an unselfish commitment to the Department of Pharmacy Administration, the School of Pharmacy and the University of Mississippi and recruited professionals and students who made this program special.

“They not only taught so many about pharmacy administration but also about what it means to be a teacher, a scientist, a faculty member, a colleague and a friend. We want this award to recognize graduate students who exhibit extraordinary levels of service and commitment as they did.”

There have been 129 M.S. theses and 112 Ph.D. dissertations completed by Pharmacy Administration graduate students over the years. The program sees 100% job placement in academia, industry and other health care areas.

“When you think of the Department of Pharmacy Administration at the University of Mississippi, you think of Dr. Mickey Smith and Dr. Dewey Garner. These two professors had considerable influence on so many people in such a positive way,” said John Bentley, a professor of pharmacy administration and an alumnus of the graduate program. “It is so fitting to have an award named in their honor. Our program is one of the best in the nation because of the culture they created.”

Garner, a resident of Oxford, Mississippi, said, “I am extremely proud and fortunate to have had the opportunity to know personally every M.S. and Ph.D. graduate of this program. I just appreciate being along for the ride. The effort and achievements of our faculty and graduate students have been phenomenal.”

As for the new award, Garner said, “Mickey and I shared a lifetime together; he was my mentor and friend. Sharing an endowment in the department we love is so special.

“I hope the endowment will provide the financial support and encouragement for the students to be of service to our department and to the discipline of pharmacy administration and the profession of pharmacy,” Garner said.

Becky Smith of Columbus, Mississippi, daughter of the late Mickey Smith, said, “My dad would be so humbled by the creation of this award, especially sharing it in name with his good friend Dewey Garner. My dad shared a great wisdom with me at an early age. He told me he didn’t care what I ended up doing when I grew up — I could dig ditches, empty garbage cans, paint walls or whatever but to just make sure I always loved what I did because I would spend most of my life doing it. And if you love it, he said, then you will always do your best, and he most certainly loved his work.

“Dad wrote his last book just two years ago — “Government, Big Pharma and the People: A Century of Dis-Ease” — and he was in his eighties! An amazing feat! And even after that book was published, he still jotted down ideas for other books that would be beneficial for the industry. He said he knew someone else would have to write them, but he was constantly thinking of his profession and its future,” she said.

“The opportunities I received within the Department of Pharmacy Administration have prepared me for a long and successful career as a member of the academy,” said Sparkmon. “While there are differences in every university in the day-to-day operations, the training on research methodologies, administrative functions and teaching techniques has given me a decided advantage as a new faculty member. UM’s department is full of some of the best and brightest within the field of social, behavioral and health outcomes research in pharmacy.

“Graduate students are there for more than simply providing research assistance,” he continued. “Faculty within the Department of Pharmacy Administration genuinely care about their students and want to see them be the most successful versions of themselves, and that groundwork was laid by the namesakes of this endowment, Drs. Smith and Garner, whose reputations are the foundations of one of the finest pharmacy administration departments in the world.”

Smith made history in 1968 by becoming the first chair of the Department of Pharmacy Administration, a position he held for more than a decade. During this time, he became one of the most renowned figures in pharmacy administration, helping to define a relatively new field.

Smith was a prolific author in pharmacy administration, editing or writing 21 books, serving as the founding editor of several journals, including the “Journal of Pharmaceutical Marketing and Management,” and publishing more than 400 articles in over 180 publications. He is widely credited with being one of the pioneers who studied the social and behavioral aspects of pharmacy and health care.

Garner, professor emeritus of pharmacy administration and research professor emeritus in the Research Institute of Pharmaceutical Sciences, served the Kappa Psi Pharmaceutical Fraternity — the oldest and largest professional pharmacy fraternity in the world — in nearly every national office and as a member of almost every national committee. He wrote a book in 1993 on the fraternity’s history. Kappa Psi recognized him for his extraordinary service to the pharmacy profession with the A. Richard Bliss Grand Council Citation of Appreciation in 2009.

The professor served as faculty adviser to the Beta Rho Chapter at Ole Miss from 1971 to 2008 and the student chapter of the National Association of Community Pharmacists from 1993 to 2009. The School of Pharmacy selected him as “Alumnus of the Year” for 2009-2010, and the Mississippi Pharmacists Association inducted him into its Hall of Fame in 2009. He served on the Mississippi Medicaid Commission’s Drug Advisory Committee from 1971 to 1985 and was one of three pharmacists appointed to the Center for Medicare and Medicaid’s States Pharmaceutical Transition Commission.

The Dr. Mickey C. Smith and Dr. Dewey D. Garner Pharmacy Administration Award is open to accept gifts from individuals and organizations. To contribute, send a check to the University of Mississippi Foundation, with the fund written in the memo line, to 406 University Ave., Oxford, MS 38655; or online at https://umfoundation.givingfuel.com/pharmacyadmin.

For more information, contact Brett Barefoot, director of development, at bmbarefo@olemiss.edu or 662-915-2711.