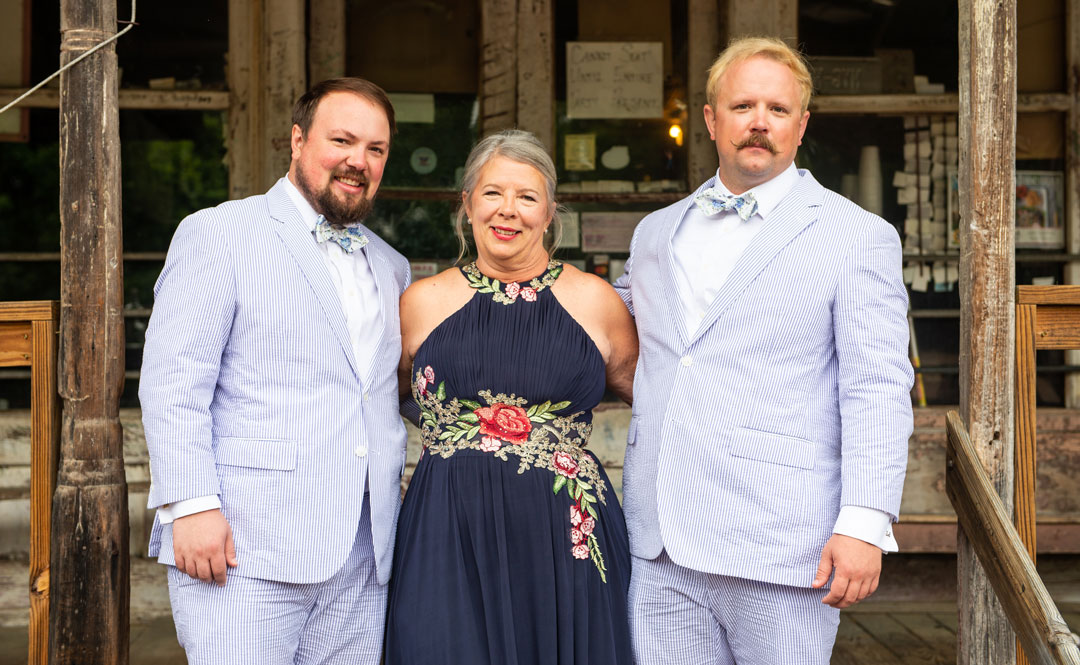 Nathan, from left, Lisa, and Patrick Towery want future recipients of the Colonel Bobby A. Towery Final Mile Scholarship to know what an exceptional leader their father and husband was. Patrick Towery said his dad had a “really good sense of empathy to know where he could fit himself in to be of maximum service to people or his community.”

Now the Colonel Bobby A. Towery Final Mile Scholarship Endowment will extend his life’s work, which was to make a difference in the lives of others. His mom, Kaye Bryant of Oxford, made a $100,000 gift to establish the scholarship, which will provide assistance to senior Army ROTC cadets with financial need, helping them to complete their degrees and receive their commissions.

“On behalf of the University of Mississippi Army ROTC Magnolia Battalion, I would like to express my most sincere gratitude for this scholarship,” said Lt. Col. Vince Jackson, chair of UM’s Department of Military Science. “This generous gift to our program will inspire the next leaders of the Army and provide them with an opportunity to serve this great nation with honor and distinction.

“This scholarship will have a tremendous impact on the program by providing senior Army ROTC cadets financial relief if funding from the Army runs out. In addition, it will provide relief for non-scholarship cadets who run into financial deficits as part of independently funding their own education. The assistance will enable them to focus on developing their leadership skills with fewer distractions and concerns,” Jackson said.

Towery was commissioned as a U.S. Army Armor 2LT in 1983 from UM, where he was a distinguished military graduate. The 30-year veteran with a decorated career, Towery is described as a “soldier’s solder,” a “servant leader” and a “compassionate mentor” by those who knew him well.

For three years now, his family estimates that about 100 people do something in Towery’s memory around the October anniversary: They exercise, give money to a charity, provide a community service or extend a kindness to someone. The family wants to keep encouraging this practice.

“To know him was to love him,” said Bryant about her son. “I want everyone to remember his story. From a very early age, Bobby could relate to people from all walks of life. He was a unique man, and I hope this scholarship inspires young men and women to finish school and become servant leaders themselves.”

“This scholarship will continue something Bobby was already doing — helping students,” said his sister Julie Fanton of Oxford.

Lt. Col. (Ret.) Dameion Logan of San Antonio, Texas, who was an Ole Miss football player and received his commission as a second lieutenant of armor, said Towery not only “religiously emphasized ‘always’ cross the finish line strongly, but he also was remarkable in assisting those who needed help getting there. I was one of those people.

“Col. Towery’s impact on my life has been tremendous. He was much more than an ROTC instructor to this little kid from North Little Rock, Arkansas, who needed to be much more than just another number if I were ever going to make it out of Ole Miss. Not only was I a cadet but also a student-athlete. Balancing multiple extracurricular programs while maintaining the responsibility of academics was not an easy task,” Logan said.

As Towery began to shape Logan’s mindset and encourage him, their relationship grew into something much stronger than a typical teacher-student relationship. Towery became a mentor, confidant and father figure to the young cadet.

“I know for certain that my successes in life have a lot to do with the love, care and commitment of one Bobby A. Towery,” Logan said.

A 2003 photograph of Towery that appeared in the media, including CBS News, speaks volumes about the person he was. In the image, he kneels beside two Iraqi girls and their family’s sheep herd. After this act of compassion, Towery and his soldiers routed their convoy around the herd as they continued on their mission.

Lisa Carver Towery, his wife of 37 years, said her husband lived by two Bible verses: “Do everything in love” (1 Corinthians 16:14) and “Here am I, send me” (Isaiah 6:8). Bobby Towery taught Sunday School classes, served in his church, coached soccer and baseball and was a volunteer booster.

“One of the many ways he made himself accessible to soldiers while they were deployed in Iraq was by cutting their hair; he was battalion commander with the 3rd Infantry Division which was the first to roll into Iraq in 2003. He set up a barber’s chair, and it was his way to give his ear to all groups,” she said. “It was an opportunity to listen and remove barriers that might exist between a young, enlisted soldier and his battalion commander.

“He would be so humbled and really thrilled to know about this scholarship,” Lisa Towery continued. “I would hope people who receive this scholarship will know it was possible because of a pay-it-forward kind of guy.”

Nathan Towery, Ph.D., of Brandon, Mississippi, his son, said, “The word I would use to describe his leadership style is ‘present.’ He wasn’t leading from a distance — he was there. Even though he’s gone, I still feel him. He’s still present.”

Patrick Towery of Oxford, his older son and a retired Army aviator, agreed: “My father had a really good sense of empathy to know where he could fit himself in to be of maximum service to people or his community. Quite often, that was helping the people who needed it rather than the top performers.

“My father was very much a people-first leader, which is so hard to be. Army officers really think about their missions, and there are times when the mission will conflict with the well-being of people and their families,” Patrick Towery said.

“Dad did such a wonderful job of taking care of people in the most dire circumstances. Our house phone used to ring off the hook throughout the night, with people seeking his guidance.”

The Towerys lived in 19 different homes in the U.S. and abroad over the course of his active military service before settling in Oxford after retiring from the U.S. Army. Bobby Towery became president of ProMatura, an Oxford-based market research firm for residential communities.

He provided leadership in many command positions including two Armor Companies at Fort Polk, Louisiana.  Additionally, he commanded the 3rd Forward Support Battalion 3rd Infantry Division into Iraq in 2003, was the senior logistics officer for the 82nd Airborne Division and commanded the 61st Ordnance Brigade in Aberdeen Proving Grounds, Maryland. He then became the 49th deputy commandant of the U.S. Army War College in Carlisle, Pennsylvania, serving where he had once been selected as a student and earned a master’s degree in military strategy.

Towery was an assistant professor of military science at Ole Miss for four years, earning an additional master’s degree during this time. He founded the Ole Miss Army ROTC Alumni Board and served as its president. A scholarship endowment started by this group and receiving a gift from Towery himself will be combined with the Towery Final Mile Scholarship Endowment.

Brigadier Gen. (Ret.) David Smith of Oxford, an alumni board member who was commissioned with Towery in 1983, said, “We’ve been trying to raise money for need-based assistance since 1995. This gift is a huge step forward, and we’re very excited and grateful to Bobby’s family.”

Towery loved the outdoors and followed his grandfather, Elton Hooker, in maintaining a family hunting preserve. He graduated from Oxford High School, where he was a member of Phi Kappa fraternity. At Ole Miss, he was a member of the Kappa Alpha Order.

To make a gift to the Bobby A. Towery Final Mile Scholarship Endowment, send a check with the fund written in the memo line, to the University of Mississippi Foundation, 406 University Ave., Oxford, MS 38655 or online at https://nowandever.olemiss.edu.

For more information, contact Delia Childers, associate director of development for the College of Liberal Arts, at dgchilde@olemiss.edu or 662-915-3086.