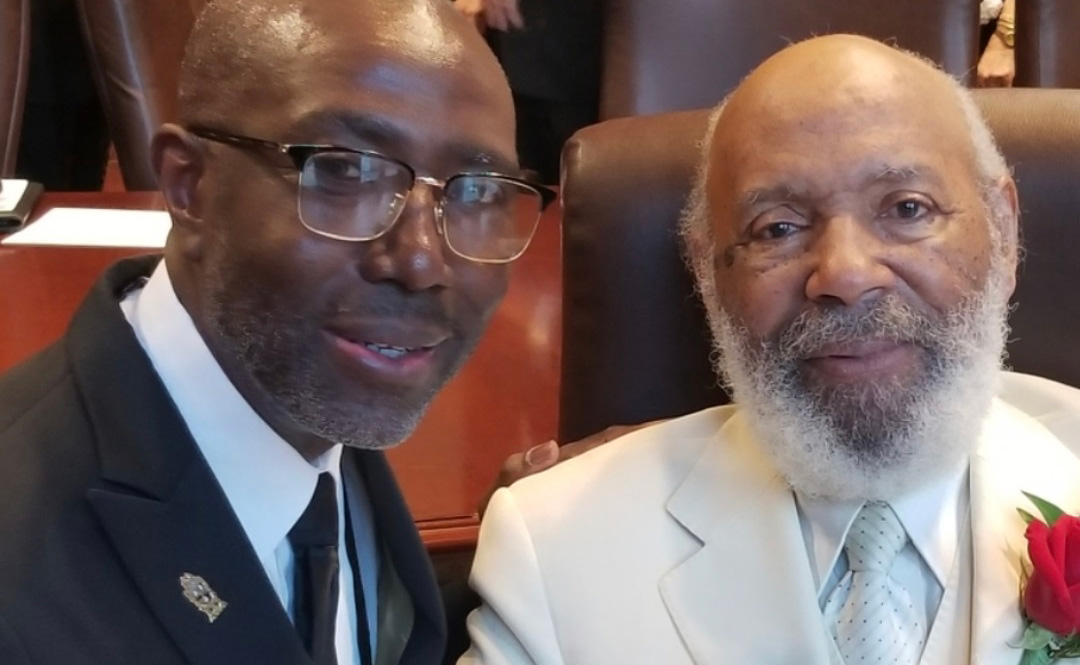 James Meredith, right, the first Black student to enroll at the University of Mississippi, is being honored with creation of the James H. Meredith Legacy Scholarship Fund. Created by UM alumnus J. Steven Blake of Philadelphia, Pennsylvania, left, the scholarship fund is now open to gifts from individuals and organizations through an online campaign during the 60th anniversary observation of Meredith’s enrollment. Gifts can also be contributed by mail to the University of Mississippi Foundation.

A new scholarship fund honors civil rights hero James Meredith just in time to celebrate the 60th anniversary of his 1962 integration of the University of Mississippi, a historic achievement that opened the door for thousands of other students.

The James H. Meredith Legacy Scholarship Fund was established by UM alumnus J. Steven Blake, a physician in Philadelphia, Pennsylvania, to “contribute to Mr. Meredith’s legacy and memorialize his presence at the university.” A crowdfunding campaign at Ignite Ole Miss has been launched to give all an opportunity to contribute.

The university plans to mark this pivotal milestone with events, commemorations, speaker series and opportunities for students to get involved. Activities celebrating “60: The Mission Continues; Building Upon the Legacy,” will continue throughout the 2022-23 academic year. The week of Sept. 26 leading up to the Oct. 1 anniversary will feature many different ways to participate, including a keynote event on Sept. 28 that will be livestreamed for those who cannot attend in person.

“The courageous actions by James Meredith in 1962 stand among the most profoundly meaningful events in our university’s history, and it is truly an honor to work with the Merediths, the planning committee and other campus stakeholders in commemorating the 60th anniversary of his enrollment,” said Shawnboda Mead, vice chancellor for Diversity and Community Engagement. “We are deeply grateful to Dr. Blake for creating this thoughtful scholarship in Mr. Meredith’s honor.”

A native Mississippian, Meredith returned from serving 10 years in U.S. Air Force service determined to become the first African American to attend the University of Mississippi. He applied for admission in January 1961, and was denied. But Meredith persisted, filing suit with the assistance of the NAACP Legal Defense Fund.

The U.S. Supreme Court ruled on Sept. 10, 1962, that Meredith was to be admitted. When Mississippi Gov. Ross Barnett continued to block his admission, U.S. Attorney General Robert Kennedy intervened to reach a deal. Meredith arrived on campus on Sept. 30, 1962, and a riot broke out on campus.

Meredith formally enrolled the morning after the riot, and federal marshals remained on campus for a year to ensure Meredith’s safety. In spite of these challenges, Meredith graduated with a bachelor’s degree in August 1963 and then earned an L.L.B. in 1968 from Columbia Law School. He has influenced civil rights in Mississippi and the nation, surviving multiple gunshots from an assailant during his March Against Fear in 1966. This sparked thousands to join his march, culminating in the largest civil rights demonstration in Mississippi history.

Meredith was inducted into the Ole Miss Alumni Hall of Fame in 2018 and visits campus often. His late son, Joseph Meredith, and granddaughter also graduated from UM.

Granddaughter Jasmine Meredith of Dallas, Texas, who earned a master’s degree in integrated marketing communication from UM this year, said, “I am thrilled to hear that this scholarship is being introduced. Sixty years later, my grandfather is still making an impact at the university and on students and their opportunity to earn their education.

“Financial hardships are tough no matter who you are, and this financial scholarship will be a relief to the individuals who are awarded. Thank you, Dr. Blake, for thinking of our future (the students) and honoring my grandfather in the process. The Meredith legacy continues — and what a powerful legacy that is,” she said.

As a child in Coahoma County in the 1960s, Dr. Blake remembers hearing about Meredith, his courage, and his experiences at Ole Miss.

Blake himself chose to make Ole Miss his college home during his sophomore year of high school while attending a Future Business Leaders of America conference on the Oxford campus. His college experiences were “not all good or all bad.”

“My parents helped me mentally and emotionally keep race relations in perspective. I am a lifetime member of the Ole Miss Alumni Association — a devoted, loving alumnus of the University of Mississippi.”

Blake, a gastroenterologist, is also an alumnus of the Philadelphia College of Osteopathic Medicine, where he has served on the Board of Trustees and as an assistant clinical professor.

When he had a chance to meet Meredith a decade ago in the Chancellor’s Box of Vaught-Hemingway Stadium at the 2012 Homecoming football game, Blake said he was “giddy, excited and thrilled.”

“I was anxious to connect with Mr. Meredith. I wanted him to know I had utmost respect for him and his unselfish sacrifice to do what he did. He transformed Ole Miss, the state of Mississippi and every institution of higher learning in the country and abroad.

“I am a believer in giving back. Because I have so much respect for the challenges he endured so that other African Americans could attend the University of Mississippi, I was inspired to begin this scholarship fund.”

Recipients of the Meredith Scholarship will be incoming freshmen from chosen Mississippi counties to honor Meredith and assist students in economically distressed parts of the state. Recipients will have a minimum 3.0 grade-point average and have financial need.

“Most of the country is aware of the conflicts and needs in Mississippi, particularly the Delta,” Blake said. “I thought it would be important to provide assistance for young people to attend the University of Mississippi.

“There are a lot of things young people and all people can learn from Mr. Meredith including courage, determination and the importance of education. For students to know his story will inspire them in their work — to believe they can do whatever they put their minds to doing.”

Blake encourages others to make gifts to the scholarship fund. “No matter your race or gender, we should all be driven to do good. Contributions to this scholarship fall in line with doing good and what’s right for those less fortunate who want to work hard and achieve academic credentials.”

Blake serves on the steering committee for Now & Ever: The Campaign for Ole Miss, an ambitious initiative to secure $1.5 billion for the university’s future.

To support the James H. Meredith Legacy Scholarship Fund, send a check to the UM Foundation, with the fund’s name written in the memo line, to 406 University Ave., Oxford, MS 38655; or online at https://ignite.olemiss.edu. To honor his commitment, “Building Upon the Legacy,” a crowdfunding campaign, also focuses on gaining contributions to the Diversity and Community Engagement Fund and the Inclusive Excellence Retention Fund.

For more information on how to support these funds, contact Katie Morrison, director of foundation relations & strategic partnerships, at katie@olemiss.edu or 662-915-2135.